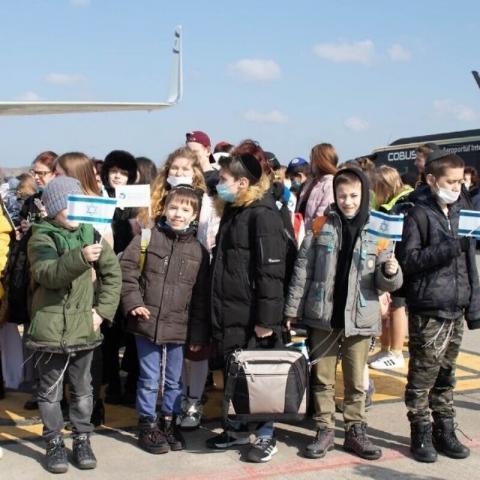 Watching from the sidelines, the activities taking place in the Be’er Sheva Educational Center look like an ordinary summer camp getting started a few months early. About 15 children, ages 5 to 12, new immigrants from Ukraine, are sitting at tables laden with modeling clay, which they are using to make colorful flowers and butterflies.

Familiar children's tunes play in the background, about the approaching spring and when the color red met the color yellow. During breaks, they eat sandwiches and drink tropical juice. But between art projects and games of catch in the courtyard, the reality of these children’s lives gradually emerges. Over the past few weeks, they have arrived in Israel from the bombed-out cities of Kyiv, Odessa and Kharkiv.

The children’s activities are conducted by volunteers from the Scout Movement doing their year of community service and by soldiers serving as teachers. Some of the counselors speak Russian, but most communication with the children is done through improvised sign language. Each interaction is an opportunity to learn another Hebrew word.

The children’s first day at the center is focused on their feelings. They draw happy and sad smiley faces on small pieces of cardboard. “Happy or sad?” the soldiers ask the children.

Artem, age 9, chose to make a sad face and talks about how much he misses his father, who is still in Ukraine. The memory of the journey from his hometown of Zaporizhzhia remains fresh in his mind. He recounts the long trip to Lviv and the bombed-out airport he saw on his way to the Polish border.

Since the Russian invasion of Ukraine began four weeks ago, some 300 new immigrants have arrived in Be’er Sheva, including 90 children, whom the Immigration Ministry are housing in hotels. Other refugees – those who have come to Israel on a tourist visa – have also arrived in Be’er Sheva, but it’s not known exactly how many there are. The education centers designated for the children of these refugees haven’t yet begun operating, but the Education Ministry says they will soon open to provide informal educational activities for refugee children, including those not deemed formal immigrants.

The program for immigrant children, which got underway on Tuesday, is meant to serve as a way station for just a few weeks. After that, the children are expected to enroll at schools and kindergartens close to the apartments that have been found for their families.

“We don’t want to uproot them again, so we’re waiting to put them into a school that’s close to more permanent housing,” explains Nataly Tsesarsky, the head of Be’er Sheva’s immigrant absorption department. In the meantime, the city is operating the center with help from the Education Ministry.

All the children attending the facility have experienced the horrors of war, but it is too early to discuss giving them full psychological assistance. “The fact that they’re here, playing and creating art, is the first step in providing them with emotional support,” says Tsesarsky. “These are children who woke up one day to a completely new reality. They still haven’t been able to internalize what happened.”

Each passing day brings the children a little closer to familiarity with Hebrew. “It’s enough to know six words in order to feel you have a certain control over the language,” Tsesarsky says. She says she hopes that by the end of the month of activities, the children will be able to move on to schools and kindergartens with enough self-confidence to join other children.

Dascha, age 9, already knows a few words – I, hello, see you, please, yes, no and good morning. Artem knows how to say, “I don’t know how to speak Hebrew.”

Over the course of the day, Tsesarsky goes from attending to the children to other jobs. The most urgent task for her is to find more permanent housing for the new immigrants. In normal times, immigrants are entitled to live in an absorption center in the city for a year, but the centers are right now filled to capacity.

The challenges posed by the arrival of so many immigrants, with the number expected to grow, requires other solutions. Tsesarsky says she very much hopes the government won’t repeat the mistakes of the past in taking in new immigrants. She is against, for example, a proposal recently discussed by the cabinet to develop sites for mobile homes for them – a solution designed to be temporary but risks becoming permanent.

It seems that the children, who came to Israel reluctantly, feel like they are in just that situation – slowly developing roots in Israel, but with their hearts still back in Ukraine.

Dascha says how she speaks with her friends back home in Kyiv every day. “Not about the situation, just ordinary things,” she says. Artem and Mark, the latter an 8-year-old from Odessa, try to get online every day to continue classes at their old school. Many of Mark’s classmates have left the city and are spread out across Europe.

Still, his classes continue as usual via Zoom. They occasionally talk about the war, he says, but continue to concentrate on the curriculum.

For all three children, what has happened to them is temporary, and they are confident that they will be returning home the moment the situation allows it.