Schoolchildren and students are unfamiliar with the history, culture, and repatriation of Jews in the Middle East and North Africa 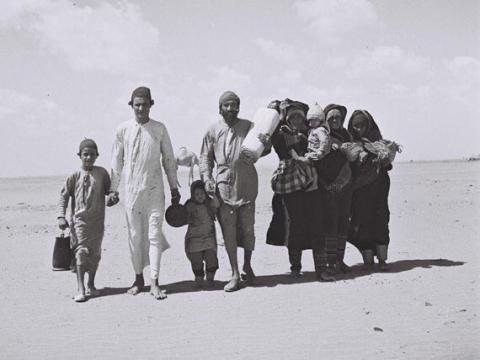 When the law to create a Day to Mark the Departure and Expulsion of Jews from the Arab Countries and Iran to be commemorated annually on November 30th was passed in the Knesset plenum in 2014, there was great excitement and expectation, especially among Jews from those countries which in total make up nearly a third of global Jewry.

Nonetheless, in the seven years since the passage of the law, it is clear that the event remains very much unknown and un-commemorated by the vast majority of Jews in Israel and the Diaspora. Worse still, one of the central components of the law, that Jews in Israel and around the world would learn about the history, culture and subsequent expulsion of the Jews of the Middle East and North Africa (MENA) goes unfulfilled.

Apart from a worthy effort by Jews Indigenous to the Middle East and North Africa (JIMENA), a nonprofit organization headquartered in San Francisco, there has been little or no attempt at formalizing a curriculum to educate students of all ages on the heritage and history of MENA Jews.

Even in the current discourse of pluralism and widening the Jewish tent to include multiple Jewish identities, MENA Jews remain conspicuously absent outside of their own institutions. The global Jewish conversation remains limited by their absence.

The global Jewish narrative remains minimally European in context and exclusionary to those whose history and heritage remain outside of the continent.

Even Zionism is still taught as a purely European modern project, unfortunately leaving room for anti-Israel voices to make the inaccurate and defamatory assertions that it is colonial or imperialist in nature. There is no mention of the millennia of practical Zionists from the non-Ashkenazi world, including the Ramban, Dona Gracia Mendes Nasi and rabbis Yehuda Bibas and Judah Alkalai, from whom, through his grandfather, Theodore Herzl would later adopt the idea of a practical and physical restoration of sovereignty in the indigenous and ancestral Jewish homeland.

The Jews of MENA did not need to learn of a modern Zionism, because it was a constant theme throughout their Diaspora. There was no firewall for many Jews of the Sephardi and Mizrahi world between the fulfillment of religious prophecy and the practical ideas of sovereignty, self-determination and statehood.

Added to this, is the moderation and flexibility of MENA rabbinical leaders from antiquity to the modern era, which chose a communitarian Judaism over an individual, and a commitment to the balance inherent in the Maimonidean “Golden Mean” of a Judaism which sits comfortably eschewing extremes.

These and many other aspects of MENA Jewish history, culture and tradition are vital more than ever. Learning about them and understanding their worldview would undoubtedly help us meet many of the issues facing the Jewish world today, whether Israel-Diaspora relations, tensions between the religious and secular and global Jewish solidarity.

There is much in the MENA Jewish experience and worldview of value for 21st-century global Jewish challenges. Moreover, commemorating the day is an important act of solidarity.

Jews from the MENA region have for too long been thought of as the “other Jews” as Prof. Daniel Elazar once described Jews of Mediterranean, Western Asian or African descent. This othering has led to myths that Sephardi and Mizrahi Jews are somehow “backward,” “superstitious” or “medieval.” These myths about communities that were, in reality, cosmopolitan, highly educated and worldly, and rational in their outlook, perpetuate ongoing prejudices.

Education, clarity and the study of MENA Jewry would clear up these problematic myths and bring our people, as a whole, closer together. The more one understands each other and our different but equal experiences and histories, the more we can build a better future.

Jewish children from Yemen, Syria, Morocco or Iraq should certainly learn about European Jewish history as they currently do, but they, along with their Ashkenazi counterparts, should also be taught about their own history.

Failing to teach this history prevents a full picture of where we as a people came from and thus where we are going. It leaves a void in our understanding of Jewish peoplehood in its entirety. Filling this void with education about Jews who were moderate, integrated but proud of their Jewish identity, communitarian and able to meet the challenges of modernity with a commitment to tradition based on the rationalist, moderate and sophisticated teachings of Medieval Torah scholars, would make the Jewish world stronger and more united.

This process began in 2014 with the passing of this important law, but its enactment has been painstakingly slow. We need this day to be marked on the calendar in every Jewish home, and by every Jewish institution and organization, particularly educational ones, similar to other Jewish days of commemoration.

Jewish decision-makers and opinion-shapers should spend this year formulating strategies to ensure that by next year, commemorating the Day to Mark the Departure and Expulsion of Jews from the Arab Countries and Iran is widely practiced in Israel and the Diaspora, with a special attention to the educational aspect.

It will undoubtedly be an important contribution to a brighter Jewish future. The writer is a CBE, businessman and philanthropist, a vice president of the World Organization of Jews from Iraq (WOJI) and honorary president of the Association of Jewish Academics from Iraq. His family charity’s education subsidiary, Dangoor Education, has supported many causes relating to education in the UK and Israel.