The Holocaust is the untold story in the Middle East 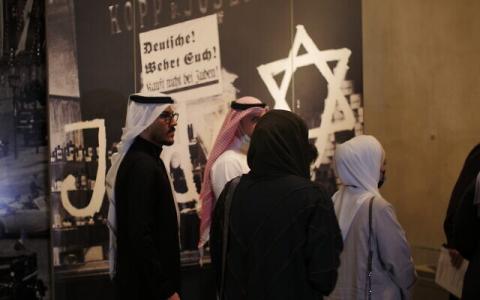 In the wake of the Abraham Accords and in honor of International Holocaust Memorial Day on Jan. 27, individuals from the group Sharaka held an event to memorialize victims of the Holocaust and to promote an action plan for Holocaust awareness and combating anti-Semitism. According to Sharaka (“partnership” in Arabic), this week’s event was the first-ever initiative to commemorate the Holocaust, bringing together Arab leaders in the Middle East.

Participants from the United Arab Emirates, Bahrain, Morocco and Saudi Arabia—some of whom participated in Sharaka’s tour of Israel in December, which marked many of their first experiences learning about the Holocaust—were joined by viewers from North America, Europe and Israel.

“The Holocaust is the untold story in the Middle East.”

During the online event, Israel’s President Reuven Rivlin offered an address, saying it was “very moving” to see young people of all religions from across the region working together. He also noted that the 50 leaders from Sharaka visited Yad Vashem in Jerusalem during their trip.

“We are bringing together Holocaust survivors with young Israeli and Gulf leaders, Jews, Muslims, Christians and Druze, to say ‘never again,’ ” he added. “This pandemic has closed borders and distanced us, but it has also reminded us of our common humanity and the need to work together to meet this challenge,” continued Rivlin. “Unfortunately, coronavirus has given rise to more anti-Semitic conspiracy theories, and we have continued to see attacks against synagogues and Jewish institutions.”

Rivlin called on all countries to “ensure that the promise of never again becomes a shared reality.” That can be done in part by adopting the IRHA definition of anti-Semitism, joining to “defeat the virus of anti-Semitism and radical hate” and showing “zero tolerance for forms of anti-Semitism, racism and extremism.”

‘You are not alone anymore’

Auschwitz survivor Vera Kriegel told her heart-wrenching story of being subjected to pseudo-medical experiments by Dr. Josef Mengele, who infamously used prisoners at the Auschwitz death camp for experiments. Beginning with the greeting Salaam Alaikum, she told the group, “I was punished and starved, and treated as a monkey. My self-esteem, my pride, my identity—all was taken away from me. I became a total nothing. I became a number, tattooed on my arm: A26946. This was my identity.”

Kriegel and her twin sister, Olga, were just 6 years old in 1942, when they were violently taken from their beds in Czechoslovakia on the eve of Passover by Nazi soldiers and brought to the concentration camp, where 40 of their family members “vanished through the chimney.”

The founder of Sharaka, Amit Deri, noted that many of the activists learned only “two or three sentences about the Holocaust, as a part of the history of the Second World War in school.” “The Holocaust is the untold story in the Middle East,” he related. “We are bringing together Holocaust survivors with young Israeli and Gulf leaders, Jews, Muslims, Christians and Druze, to say ‘never again.’ ”

Amjad Taha, co-founder of Sharaka, told Vera that she had a new home in Bahrain “and in the heart of every peace-lover.” And he urged that countries in the Arab world and Gulf must educate about the Nazi persecution of the Jews in school curriculums. “From a young age to graduation, they should be taught about the Holocaust and ways to counter anti-Semitism,” he related.

Majid Al-Sarrah from the UAE encouraged all people to “see the reality of the Holocaust at Yad Vashem and promised, “We will spread the knowledge about the Holocaust. We will raise peace and love, say never again to anti-Semitism, hate and discrimination. We are brothers and sisters. We will stand together, and together, we will build a world free of anti-Semitism and hate.”

Mashael Al-Shemeri from Bahrain said, “I would like to say to all Jews and the people of Israel: You are not alone anymore.” Najat Al-Saeed from Saudi Arabia added, “We must educate young generations about the full horrors of the Holocaust, including by ensuring that the Holocaust is taught in schools in the Abraham Accords countries and that special envoys are appointed for preserving Holocaust remembrance.”

Kriegel expressed joy in knowing that the Arab leaders wanted to learn everything about the past, saying, “I’m so overjoyed, so happy, so moved, so everything, and I embrace all of you.” At the event, Sharaka presented its five-point plan for combating anti-Semitism, which includes promoting Holocaust awareness and education, interfaith dialogue, incorporating the IHRA definition of anti-Semitism and countering anti-Semitism online, in addition to the BDS movement that seeks to delegitimize Israel.

“This is an opportunity that the Abraham Accords have given us, and I believe there will be more events like this to follow,” said Deri, who announced that this April, Sharaka will lead the first-ever Arab delegation of young leaders to Auschwitz-Birkenau as part of Yom Hashoah, Israel’s Holocaust Remembrance Day, which will be observed this year on April 8-9.