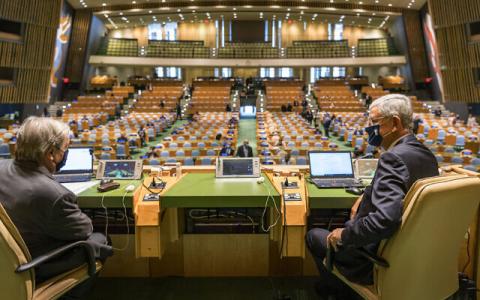 The United Nations General Assembly on Monday adopted two resolutions criticizing Israel, bringing 2020’s total tally to 17 resolutions against the Jewish state versus six resolutions singling out any other country, according to a tally by pro-Israel watchdog UN Watch.

Israel and activists have long slammed the UN for routinely adopting decision after decision directed against Israel, saying it exploits an overwhelming automatic majority that votes to censure Jerusalem no matter the subject. General Assembly resolutions are nonbinding, but are seen as carrying symbolic significance.

The two motions were ratified this week after their drafts were adopted last month by the General Assembly’s Economic and Financial Committee, UN Watch said in a Monday statement. One of them, titled “Oil slick on Lebanese shores,” condemns Israel over an alleged 2006 incident from the Second Lebanon War fought with terror group Hezbollah. It passed with 162 countries supporting it, seven opposing it and six abstaining.

The second criticized the Jewish state for allegedly exploiting the natural resources of Palestinians in the West Bank and Syrians in the Golan Heights, and passed 153 -6, with 17 abstentions. Those votes join 15 others this year that singled out Israel for censure, while just six targeted all other countries combined: One each condemned the regimes of North Korea, Iran, Syria, and Myanmar, and two were on Crimea, which was seized in 2014 by Russia.

“The UN’s assault on Israel with a torrent of one-sided resolutions is surreal,” said Hillel Neuer, executive director of the Geneva-based UN Watch. “It’s absurd that in the year 2020, out of a total 23 of UN General Assembly resolutions that criticize countries, 17 of them — more than 70 percent — were focused on one single country: Israel. Make no mistake: the purpose of the lopsided condemnations is to demonize the Jewish state.”

“When the General Assembly gives in to politicization and selectivity by discriminating against Israel, it violates the UN Charter’s guarantee of equal treatment to all nations, large and small,” Neuer added.

“We note that the UK and EU states like France, Germany and Spain voted Yes to more than two-thirds of the UNGA resolutions singling out Israel in 2020,” he charged. “Yet these same nations failed to introduce a single UNGA resolution this year on the human rights situation in China, Venezuela, Saudi Arabia, Belarus, Cuba, Turkey, Pakistan, Vietnam, Algeria, or on 175 other countries.”

He noted that there had been “modest yet notable progress” this year with some EU states opposing or abstaining in votes to renew the mandates of UN bodies dedicated to Palestinian rights. “Today’s farce at the General Assembly underscores a simple fact: the UN’s automatic majority has no interest in truly helping Palestinians, nor in protecting anyone’s human rights; the goal of these ritual, one-sided condemnations is to scapegoat Israel,” Neuer concluded.