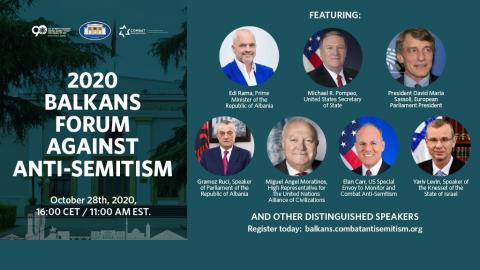 Top officials from the US, Israel and a number of southeastern European countries — including Albania, Kosova, North Macedonia and Montenegro — took part on Wednesday on the first-ever Balkans Forum Against Anti-Semitism. The event took place against the backdrop of Albania’s recent decision to adopt the International Holocaust Remembrance Alliance (IHRA) definition of antisemitism.

A press release from the Combat Anti-Semitism Movement — which helped organized the event, along with the Albanian parliament and the Jewish Agency — said, “Participants discussed how Balkans countries can work together to eradicate anti-Semitism, creating better, more tolerant societies for future generations and the important role that the IHRA definition can play in this process.”

US Secretary of State Mike Pompeo told the online gathering, “We are here because antisemitism is sadly still with us. We share the responsibility of those before us to crush it. We can do it. First, we must define this threat and understand it clearly.” “The task of combating antisemitism is pressing, especially as we have seen a disturbing uptick during the pandemic,” he noted.

Albanian Prime Minister Edi Rama said, “We need to continue to fight every form of anti-semitism, not only as a threat to Jews and Israel, but as a threat to our own civilization and values, on which our future is being built.”

He also emphasized the threat posed by online antisemitism, saying, “Let us not forget that the very first pogroms originated from the ‘fake news’ and slanders of the day against the actions of Jews. This is where it all originated. The new form of spreading this in the digital world should worry us. There is a lot of hope in digital society for progress, but this must not turn into a nightmare spiraling out of control.”

Israeli Knesset Speaker Yariv Levin said, “Antisemitism happens not only in the darkest corners of the internet but also in the open. We must ask how we got here and how we can combat it. We need to use all the tools available, legislation, education to stop hate speech and antisemitism. We must urge adoption of the IHRA definition of antisemitism. I hope that the message of Albania’s vote will inspire other parliaments in the Balkans and around the world.”