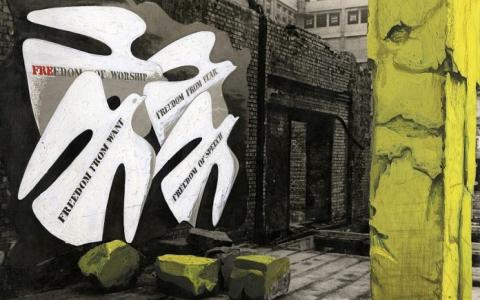 A nationwide UK arts festival celebrating the refugees who came from Nazi Europe and their indelible contribution to British culture opens March 2, and will run through March of next year. Coinciding with the 80th anniversary of the outbreak of World War II, the festival, called “Insiders/Outsiders,” brings together a vibrant program of exhibitions, concerts, dance and theater performances, film screenings, walks, lectures and literary and educational events.

The festival launches with a series of exhibitions, talks and concerts, as well as the opening of two design exhibitions in London. The Isokon Gallery will house an exhibition entitled “George Adams: Bauhausler in Britain,” focusing on the prolific, Austrian-born graphic designer, while at the London Transport Museum, “Émigré Poster Designers” will feature the work of Hans Schleger, Hans Ungar and László Moholy-Nagy.

A lecture at Jewish Book Week is set to shine a light on Oscar Nemon, the little-known sculptor behind some of Britain’s most iconic public statues, including those of Freud and Churchill, and a number of events held in London and Cambridge will pay tribute to the Austrian-born musician and writer Hans Keller, along with his wife, artist Milein Cosman.

Initiated by London-based art historian, curator and writer, Monica Bohm-Duchen, “Insiders/Outsiders” pays tribute to the artists, photographers, writers, architects, musicians as well as art historians, dealers and publishers who greatly enriched British life and culture. An accompanying anthology of essays, focusing on the visual arts and edited by Bohm-Duchen, will be published this month.

Speaking to The Times of Israel over the phone, Bohm-Duchen, the festival’s creative director, explains that she had the idea when she was exploring the northwest London suburb of Hampstead for a potential project. “I was lucky enough to grow up in Hampstead, an area where so many of the refugees came, so it was a very rich cultural milieu,” Bohm-Duchen says. “About two years ago, I was in conversation with another curator about a possible exhibition on that subject and I had this sudden — not a revelation exactly — but an idea that it could become much, much bigger. I had absolutely no idea then how big it would become,” she says.

There are numerous institutions participating in the festival, including The National Gallery, Glyndebourne, Pallant House Gallery Chichester, the Trinity Laban Conservatoire of Music and Dance and the Courthauld Institute of Art. Bohm-Duchen believes that the festival has struck the right chord, at the right moment. “With issues of immigration and a sense that feelings of xenophobia are horribly on the rise again, everybody says how it’s very timely. So, it’s not just the historical significance, it does seem intensely sadly relevant to the present,” she says.

But the initiative is also influenced by personal reasons. “On a profound level, I’m doing it for my parents. They both came to the UK, just in time. In my dad’s case, in 1938 from Poland, and my mother [the celebrated photographer Dorothy Bohm], left Lithuania in June 1939,” says Bohm-Duchen.

“Both families suffered profound losses in the Holocaust — my dad in particular. He lost his mother and his sister, and could never talk about any of it. That left a real impact on me growing up, without being fully conscious of it at the time,” she says.

She says her parents always expressed gratitude towards the UK, against the unspoken backdrop of their tragedy and loss. “[That’s] very much what this festival is about. It’s about celebration, it’s about achievement but it’s also, hopefully, about reminding a broad spectrum of the public of the trauma and the difficulties of leaving; that it wasn’t always straightforward when they did come,” Bohm-Duchen says.

“I think one needs to be reminded that the British government didn’t then, as now, make it easy. But there were well meaning British-born individuals who did generally want to help, and they did,” she says. Bohm-Duchen believes that it is also a fitting moment to acknowledge those people, who by welcoming and working with the émigrés, “chose openness and internationalism over provincialism and xenophobia.”

“But that’s sort of said en passant,” she says. “I think this is a real opportunity to examine their impact and contribution in a more nuanced way across a spectrum of art forms and experiences.” “Insiders/Outsiders” coincides with the centennial anniversary of the establishment of the Bauhaus School of art, architecture and design, founded in Weimar by architect Walter Gropius in 1919.

The school was closed by its leadership in 1933, under pressure from the Nazi regime, but though short-lived, influential alumni included figures such as Anni Albers, Marcel Breuer and László Moholy-Nagy. The school itself is the subject of an exhibition, “The Bauhaus in Britain,” which opens in June, at Tate Britain.

That is, says Bohm-Duchen, serendipitous. “Very few people know how many of the really big names from the Bauhaus [such as László Moholy-Nagy, Walter Gropius and Marcel Breuer] came to the UK, even briefly, but they actually did, and exerted some influence here. It was an important transitional period for them,” she says.

From the autumn, the Royal Institute of British Architects (RIBA) will be running an exhibition focusing on the architectural contribution of these three prominent Bauhaus figures. Later in the year, the William Morris Gallery in London will hold the first exhibition to explore the British textile designer William Morris’s relationship with the Bauhaus. Pallant House Gallery Chichester will exhibit portrait paintings and drawings by the artist and potter, Grete Marks — also known as Margarete Heymann — who trained at the Bauhaus.

It is, says Bohm-Duchen, invidious to highlight any particular aspect of the festival. “It’s so wide ranging. In the broader sense, it can reveal to people the shared extent — the pervasiveness of the influence — across all the different art forms and indeed beyond,” she says. Although the primary focus is on the arts, Bohm-Duchen is keen to point out that the festival includes events relating to the émigrés’ remarkable contributions in other fields, such as science and psychoanalysis.

For Bohm-Duchen, it is important to acknowledge the link between the past and present experience of refugees. “By examining the refugee generation of the 1930s and ’40s, it will, I hope, help people look more sympathetically at the refugees coming to this country now, with an understanding that it may not be immediately obvious, but their contribution too, could be immense,” she says.