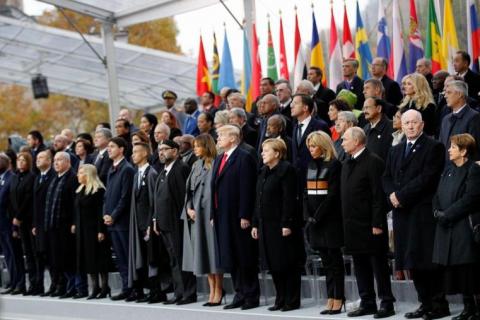 On the 11th day of the 11th month and at the 11th hour — the moment at which the armistice ending World War I was declared a century ago — the leaders of the nations that once murdered one another during that brutal conflict gathered in Paris. That was expected. The surprise was the degree to which a formal occasion so brilliantly exposed the relationships between former allies and former opponents today.

The British prime minister, Theresa May, was not there. She chose to attend a ceremony in London, led by Prince Charles, in front of a memorial to Britain’s war dead. This is an event that takes place every year, so there was nothing surprising about her decision to stay home. Still, it came at the end of a week in which her cabinet tore itself apart, bitterly and publicly arguing over the way in which Britain will leave the European Union and create new conflicts with old allies. In that context, the absence of Britain, one of the most important participants in the war, felt ominous.

As most of the leaders walked down the Champs-Elysees to the Arc de Triomphe, the U.S. president, Donald Trump, was not there either. Trump had failed to appear at an American cemetery near Paris on the previous day, citing the excuse of “rain.” On Nov. 11, his spokesman alluded to “security protocols” to explain his tardiness. Because others were not worried about security, this explanation seemed insufficient. Perhaps Trump was still stewing about the midterms; or perhaps he could not or would not make a gesture of solidarity to allies with whom America fought in past wars; of Europe, he wrote back in 2000, “their conflicts are not worth American lives.” In any case, he arrived late. With characteristic arrogance, Russian President Vladimir Putin arrived even later.

The German chancellor, by contrast, was not bothered by security protocols. And despite the rain, Angela Merkel did make it to a ceremony the previous day in Compiegne, the site of the actual German surrender in 1918. Merkel was the first German chancellor to come to Compiegne since Adolf Hitler, who insisted that the French, in turn, surrender there in 1940. Her willingness to appear in Compiegne — and to send the German president (a more ceremonial head of state) to London, also for the first time — is the kind of gesture we have come to expect from her and from Germany, a country whose political leaders still believe their future lies in the alliances built in the aftermath of the terrible wars of the 20th century. But although we now expect them, it’s worth remembering how extraordinary, in the context of Germany’s post-1918 history, these gestures really are.

Finally, it was left to the French president to sum up all of these images and to put them into words. In France, a country that is accustomed to thinking of itself as a great nation — it was Napoleon, the conqueror of much of Europe, who ordered the building of the Arc de Triomphe — there have historically been conflicting feelings about alliances. Emmanuel Macron sought to resolve them, using the occasion to draw a distinction that is too rarely made, between patriotism and nationalism: “Patriotism is the exact opposite of nationalism . . . By saying ‘our interests come first and the interests of others don’t matter’ we erase what a nation has most precious, what enables it to live: its moral values.” But although we have come to expect this argument from Macron — that it is possible to feel simultaneously loyal to one’s country and to “universal values” — not everybody in France agrees, and the French president is unpopular. There is certainly no guarantee that his successor, whoever he or she may be, will argue the same.

As I say, it was just a ceremony, just an orchestrated event with music and flags. But we may also look back on it, someday, as one of the last ceremonies of its kind.