Hunger Supplants Religion as the Driver for Middle East Conflict 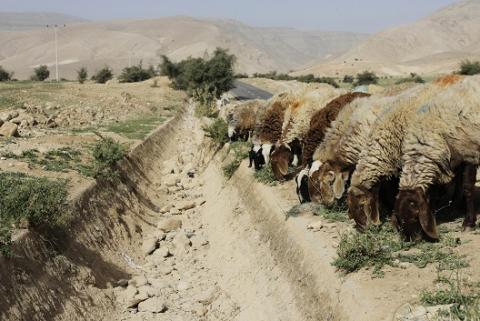 The products that have captured the headlines in the U.S.-China trade wars have been things like computer chips and iPhones. That’s understandable because a big part of the conflict is about global high-tech leadership and who will be the dominant power in critical fields like artificial intelligence.

Yet the trade war is having its impact on low-tech things like pork and soybeans and that shouldn’t be ignored. Even in a world of robots and big data, people still need to eat and expect to eat well. It’s not just Trump’s trade wars but his stubborn denial of climate change that are creating the conditions that threaten to make the world’s supply of food less reliable than what we have come to expect. Israel and the Middle East are especially vulnerable.

For now, they’re riding on ponies, but those two horsemen of a future food apocalypse are trotting across China. Chinese are big consumers of pork, but the country’s pig population has been devastated by Africa swine flu. Meanwhile, the fall harvest awaits an invasion of the armyworm, which is threatening to slash harvests of rice, corn and wheat. Food prices have begun to soar. Neither problem is connected with climate change, but they are indicative of how that the industrial-scale farming that has so successfully fed the world is vulnerable to industrial-scale disasters.

Climate change is only going to make these kinds of large-scale events more frequent. In the U.S. there were more than four times more weather events causing damage in excess of $1 billion (in 2011 prices) in 2007-11 than in 1980-85. In a scenario where two major shocks to the supply of basic food commodities occurred in the same year it would spell a sudden drop of 5% to 10% of world harvest, an amount about equal to a year’s worth of U.S. consumption.

It’s been the glory of the system of global free trade that Trump so disparages that when a shortage develops in one part of the globe, another part can ship commodities there. Of course, the system isn’t perfect, but the world is more food secure than any time in history.

Climate change will do a lot to shake up the familiar patterns of food production and consumption and make the system of moving food from where it is grown to where it’s eaten more critical than ever.

But if Trump pursues his trade wars and others follow suit, the system that feeds the world (international trade delivers enough of the four basic food commodities – wheat, corn, rice and soybeans – to feed 2.8 billion people) will inevitably become disrupted by fear, paranoia and protectionist, beggar-thy-neighbor policies.

That is already the case with China, which is loath to turn to a mercurial partner like Trump’s America to solve the problem.

Take all the problems China is facing and multiple them by 10 when it comes to the Middle East. As it is,the region is famously dry and only about 5% of its land is arable. Government policies only make this worse by encouraging farmers to grow water-thirsty cereal crops and overexploiting underground aquifers. Even though it has little water, prices are heavily subsidized and a lot is wasted.

It’s only going to get worse. Climate change is going to hit the Middle East harder than most parts of the world, and the region on the whole doesn’t have the technical resources or effective government to handle it. Over the past century temperatures have risen 0.5 degrees Centigrade and precipitation has fallen in some areas by as much as 10%. The future will bring even higher temperatures, more droughts and lower yields.

Who will feed the region? The Middle East is already the single biggest importer of food: Even though its accounts for just 6% of the world’s population, it gobbles up 27% of the world’s cereal imports and accounts for outsized shares of things like sugar and poultry. If anything, climate change will make it more dependent on imports than ever, yet the system of world trade may not be robust enough to deliver them. We can see that already.

China responded to U.S. tariffs by slapping its own on U.S. agricultural imports. The result has been a surge of exports from Brazil of soybeans and other oilseeds to China, which jumped 48% between July 2018 and April 2019. Some experts predict Brazil may devote acreage no less than the size of Greece to meet China’s soybean hunger.

But if the Chinese are importing more Brazilian soybeans, that means someone else isn’t getting what they had expected. And, lo and behold, media reports say the Saudi government is worried its food imports from Brazil may suffer. The kingdom grows just 8% of the cereals it consumes.

Israel may be better off than its neighbors because we have more technological and financial resources to cope with climate change and trade disruptions. But we’re still at risk because it will be impossible for us to stay aloof of climate and food crises just over our border. Indeed, it has already happened once with the Syrian civil war, which many analysts believe was sparked by weather-related agricultural crisis.

It portends a Middle East where religion and nationalism give way as sources for hope and grievance to an empty stomach.