How to integrate haredi? 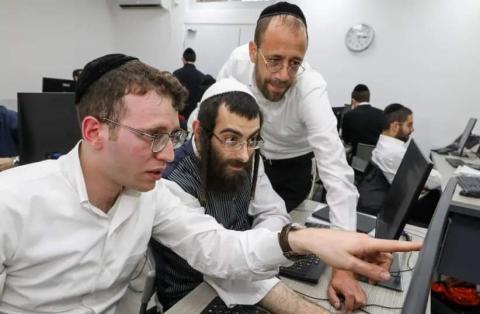 Israel has generally avoided coercion toward the haredi minority, regarding the draft, education and other issues. That aligns with the liberal idea that sanctifies discourse and disdains force. This idea sounds progressive and correct, but it’s misleading and in this context dangerous. The dawn of a new Hebrew year is a good time to examine the issue, which is vital to the future of the Jewish state, people and religion.

Persuasion is increasingly difficult across society. But even in our mulish era the ultra-Orthodox leadership stands out: there is no one to persuade; they strongly tend to disrespect perceived weakness and will clearly respond to pressure alone. If modern Israel wishes to preserve itself it must decide what is needed, act, and be ready for a degree of conflict.

Which is not the end of the world. This, more or less, is how the state acts on most matters with most people. The tax bill and the draft notice simply arrive in the mail. It’s true that the haredim have been exempt from coersion for so long that a change would beget anger and shock. But there is no choice, because an emergency is at hand whose contours are basically these:

The haredim largely refuse to teach students a core curriculum that will make them employable. Only about half the men work and many of these are in fictitious positions funded by the state in a vast religious bureaucracy that is largely an indirect subsidy to the sector.

The other half are encouraged to study religion all their lives; this gets them community respect and also puts great power in the hands of the community leaders. Moreover, evading the army is made possible by yeshiva study, which ensures mass enrollment and helps the leadership keep their flock cloistered.

Haredi families have over seven children on average, which is so much higher than the rest of society (in Israel as well as anywhere) that the community doubles itself every 16 years (attrition is low), placing Israel en route to a haredi majority in a few generations – unfathomable though this may be to most non-haredim.

This setup is made economically possible by haredi expectations that rather than paying a tuition, the adult religion students will receive a salary, through huge discounts on municipal tax, daycare and the like, and by subsidies for each child without limit. Maintaining this as the community grows further will require tax increases, will lead to tax revolts and emigration and will eventually bring the economy to collapse.

Beyond the prosaic, there is a philosophical conflict between the two cultures that cannot easily be bridged; any pretense of mutual respect is increasingly based on a lie.

Many haredim have been systematically taught to disdain the entire edifice of external human culture and experience – from Rousseau, Shakespeare and Confucius to computer science and rock music – as an “empty cart.” They view secular fears of a haredi demographic takeover as a sign of their strength and success, and their leaders betray no concern about the coming economic collapse (perhaps they really believe God will print more money, or otherwise fix it).

BY THE same token, non-haredim cannot genuinely respect a culture that assigns rigid gender roles to men and women and widely ignores science in favor of the rulings of rabbis who are expert only in matters of religion (as we saw in the widespread ignoring of corona guidelines). Some (though certainly not all) non-haredim make a show of respecting it, which comes from a cocktail of politeness, Yiddishkeit nostalgia with nationalist roots, and a naïve political correctness that assigns equal value to all endeavors.

The haredim do not want the state subsidizing the philharmonic and the national basketball team; the secular generally do not want to subsidize yeshivot. The difference, of course, is that it is overwhelmingly the non-haredim who are actually subsidizing anything.

Until today the main argument has been about the draft. There is a logical reason for the haredi leadership’s refusal to sanction service: fear of exposing haredi youth to the temptations of secular life (including the dreaded mixing of the sexes). There is a logical reason for the support for this among haredi youth: it is no fun to risk one’s life. But when the claim becomes that fervent prayer and religious study are a comparable sacrifice to national service – which is indeed what many claim – this is hypocrisy so brazen and outrageous that one can only be amazed that it lives on another day.

The rage it causes may be useful, because it clarifies the essence and makes visible the truth. And the truth is that modern society and haredi life are so irreconcilable that the only way they can coexist is if one of the two groups is a small minority, as the haredim have been to date.

At 12% now, the haredim are already pushing the limits of this delicate balance, and this is why there is such tension. The possibility of letting them break off into a Jewish version of Iran is made impractical by the community’s dispersal around the country. Absent that, if the haredi proportion of society grows much further without the group changing its ways there is a real risk of civil war (again, unfathomable but true). And it will not change its ways without a change in circumstances.

Modern Israelis cannot advise the haredim to enact responsible and normative family planning (it will only give rise to absurd charges of antisemitism). But modern Israel is also under no obligation to continue to subsidize its increasingly accelerated destruction. A strategic dismantling of this time bomb is needed, whose components could be as follows:

• Salaries for adults studying religion should be phased out, with no new ones added and existing students allowed an adjustment period of several years to fund their own education with work, as Maimonides himself had done.

• Child subsidies should be phased out after the third child (for all Israelis), with no new ones added and with payments for those already born continuing out of fairness.

• State funding should be withdrawn from any school that does not teach math, science and English, and this should be monitored to ensure compliance (as opposed to fake classes).

• The draft exemption for yeshivot should be eliminated, with a few exceptions for true Torah sages who can defer service, as with super-talented students in all sectors. I would recommend allowing all haredim to do national service (including within haredi communities) as an alternative, however, for a transition period at least.

This should naturally lower birth rates, begin the process of integration, and end the outrageous inequality that currently prevails. There is bad karma in that inequality; it cannot go on.

To enable the Left and the Right to unite behind such a difficult plan, the status quo in the West Bank should be frozen for several years (no new settlements, no new peace plans, and a genuine minimizing of the scandalous oppression). Unless this happens and succeeds there will be no Israel remaining to make peace with the Palestinians anyway.

This must happen while the haredim are not in the coalition – like now. The haredi leadership will curse and howl, and they need to be ignored. There is no one there to talk to in that leadership at present; their interests, as they perceive them, lie in the catastrophic status quo.

But the sons and daughters of the community should be embraced, with compassion, love and Jewish charity.