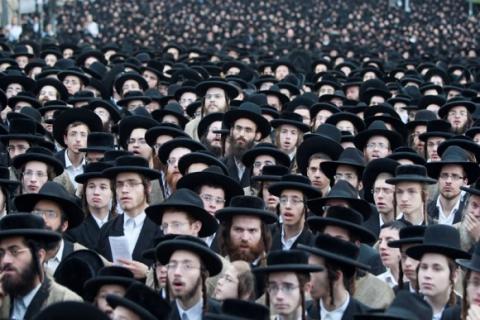 Some secular Jews must feel like they’re members of a vanishing species. Every few months, another poll comes out calculating that on current demographic trends, within one generation every El Al flight will be segregated between men and cattle class, and the in-flight entertainment will consist of talmudic debates.

Last month, it was a study carried out by the estimable Institute for Jewish Policy Research in London, which estimated that by the end of the 21st century, the majority of British Jews will be ultra-Orthodox. A couple of years ago, there was a similar report on Jewish demographics in New York, where almost the entire growth in numbers had come from the Haredi community – with similar projections for the future.

In Israel, of course, we get these predictions nearly monthly – soon the Haredim will be the majority in schools, and we won’t have enough soldiers and engineers. These projections have become so sensitive that the Central Bureau of Statistics last month dropped the numbers of religious and secular schoolchildren from its annual report, citing “accuracy” problems.

Of course, you don’t have to be a demographer to gauge the trend. Birthrates among Orthodox and Haredi families are nearly three times as high as those of secular and other non-Orthodox Jews, who are also much more liable to “marry out,” assimilate and live far away from established Jewish communities. So it figures that the result over a generation or two would be the numbers of Orthodox overtaking the rest. But numbers aren’t everything.

If birthrates were the only factor determining Jewish demography, the vast majority of Jews today, and at any point in history, would have overwhelmingly been Orthodox. But there are so many other factors that for over a century have kept them in the minority.

Over the last couple of centuries, there were at least four waves of mass secularization. The first came in the 19th century as Jews gradually gained civil rights in Western and Central Europe, and the dual currents of Enlightenment and Haskalah opened the way into general society for them. In the early 20th century, it was the great Russian revolutions that brought the Jews there, and inspired others elsewhere to join a socialist utopia and relinquish their religion – sometimes by force. Meanwhile, across the Atlantic, the allure of capitalism was doing the same for hundreds of thousands landing in America and quickly losing their religious practices (but not necessarily their Jewishness). And then there was Zionism and life in Israel, which for so many became an alternative Jewish identity.

A historical study of Jewish birthrates over the last 100 years, if possible, would demonstrate that Orthodox families were always having many more children, but that most of those children would not end up having Orthodox children themselves. And then there was the Holocaust, the greatest demographic upheaval of all.

The extermination of close to half the world’s Jews, the dislocation of millions others – including the forced emigration of Jews from Arab lands in the decade after the Holocaust – ripped the living heart out of Jewish Orthodoxy, whose main communities and institutions, slow in emigrating from Eastern Europe, were all destroyed. The postwar years saw the continued prosperity of the two main remaining Jewish communities, in the United States and Israel – but those trends had been in place before World War II.

For the Haredim, it was a long and difficult process of rebuilding from the ruin. High birthrates were key to that rejuvenation, but they were offset by the fact that the temptation to become “ordinary” Americans or Israelis was still more powerful to many young people, who didn’t want to remain members of small, isolated and alien communities. There are no statistics, but all available evidence points to an outward trend with most young Israelis and American Jews becoming less religious well into the 1980s.

Why did the trend reverse?

Ultimately, birthrates that enlarged and strengthened communities played a role, but they are not the main reason the Orthodox greatly improved their retention rates and kept most of their young within the fold. What happened is that a new generation of leaders, who grew up in Israel and America, became much better at playing the political and financial game, parlaying the numbers into electoral clout and power at the local and national government level.

Money, connections and greater respectability allowed them to expand and improve institutions, provide young men with social benefits, allowing them to continue studying Torah and start their own families at the age of 19 or 20, and establishing their financial dependency on the community.

More resources, manpower and growing self-confidence also allowed them to focus greater efforts on recruitment and various Hazara and Kiruv outreach movements, such as Chabad. But many others also became highly professional in attracting those who felt unmoored from their Jewish roots. For the first time in over a century, Orthodox Jewry was growing again, exponentially. All the current reports predicting that they will become a majority at some point are based on these trends continuing. But will they?

The political influence and organizational savvy of the Haredi leadership doesn’t seem to be weakening, certainly not while Benjamin Netanyahu remains in power and chooses to rely on them as his coalition mainstay. But the religious politicians and spiritual leaders are gradually losing control over their people. On the outside, the Orthodox and ultra-Orthodox communities look as powerful as ever. But as a generation of admired, venerated rabbis – their lives extended to over 100 by modern medicine – dies out, the leaders who inspired the rebuilding are departing. Their successors, men in their seventies and eighties, cannot grasp the information age of the 21st century, in which every youngster can reach out beyond the walls of the self-imposed ghetto.

The rabbis’ attempts to prohibit Web surfing and the use of smartphones have totally failed, as shown by the massive number of young Haredim on social media, many of them using their real identities. Online, at employment exchanges, in army induction centers and vocational colleges, the proportion of ultra-Orthodox men and women openly seeking an alternative is impossible to ignore. Most are still trying to accommodate their personal choice with their religious beliefs and affiliation, but the ideological contradictions and social pressures may becoming too much to bear. For nearly 70 years, the rabbis built the community’s revival on isolating their followers from external influences. But can the center hold when every young man and woman now has a world of foreign information and outside human connections in their pockets? The question is no longer whether they will leave, but when and how many?

Will there be a fifth wave of mass secularization? Demographers cannot predict that, but recent history can and the signs on the ground do. Secular Jews aren’t dying out: More and more of them are being born every day in the Haredi community.