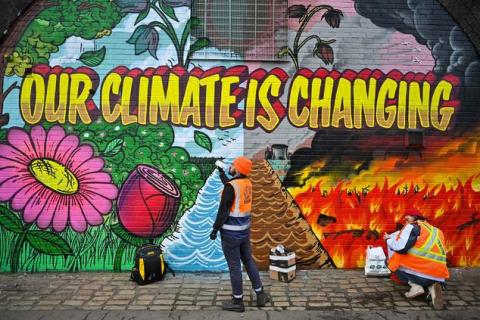 Global leaders will meet in November to outline the plans of countries, cities, and industries to mitigate and adapt to climate change. The 26th edition of this annual meeting, officially known as the “Conference of the Parties” or COP, will take place in an atmosphere of justified global alarm.

The Intergovernmental Panel on Climate Change recently warned that changes triggered by runaway carbon emissions—including global sea level rise, increasing wildfires, and extreme heat—are already “irreversible for centuries to millennia.” Failure to act immediately will accelerate those dangers, which is why every fraction of degree is crucial when it comes to limiting global temperature rise and why reducing emissions from every major source matters.

COP26, in Glasgow, is the best chance in years for countries to commit themselves to solutions: deep cuts in carbon emissions, the expansion of renewable energy, modernization of transportation systems, investments in equity for low-income countries and communities, and more.

Will leaders seize this opportunity, or will another year pass without adequate action? It all depends on what’s happening right now, in negotiating rooms around the world. To understand the process, we need to start with a bit of history.

The United Nations held the first Conference of the Parties back in 1995. COP1 concluded with the Berlin Mandate, a precursor to the Kyoto Protocol. The Berlin Mandate committed world leaders to keep talking but rejected plans to make targets and timetables for carbon emissions reductions legally binding. This decision was crucial and echoed through COP after COP, where big emitters, including the United States, consistently refused to commit to specific and accountable limits on their greenhouse gas emissions.

These “bad COPs” continued until we finally got a “good COP” in 2015. At COP21, held in Paris, the international community agreed to a new process. Every single country in the world would announce a specific target for emissions reductions this decade, by either 2025 or 2030. The targets would not be legally enforceable—a limitation largely the result of political gridlock in the United States—but each nation’s success or failure would be measurable and comparable, providing diplomatic and peer accountability for the first time.

The 2015 commitments were a strong foundation, but even then it was clear that the countries’ emissions targets were inadequate. Recent research suggests that current international commitments would increase greenhouse gas emissions by about 16 percent by 2030 compared to 2010, far short of the roughly 45 percent reduction in carbon emissions that is required to keep the world at 1.5 degrees Celsius of global warming.

Significantly, the Paris Agreement built in a ratcheting mechanism. All countries committed to a tightening of their emissions commitments every five years, with the assumption that advancing technology and greater political will for solutions were on the horizon.

Strengthening emissions targets has become a major test of a country’s commitment to tackling climate change. Several major emitters have failed to increase their ambition, or they are even taking steps backward. Brazil’s recently announced plan, for example, is weaker than its 2015 promise. And, according to international observers, the country is not on track to meet even that commitment. Russia is another problem emitter. The country’s carbon emissions (the fourth largest in the world) are on track to rise for decades, with the government arguing incorrectly that carbon absorption by Russia’s forests and swamps will offset these increases.

“COP26 has to be a moment of acceleration to put us on track to stay below 1.5 degrees Celsius of warming,” says Brendan Guy, NRDC’s lead strategist on international climate. “We need commitments and actions for this decade, not decades in the future.”

The first major deadline for improved targets was 2020, five years on from COP21, but the COVID-19 pandemic set the timetable back to this year. That’s why COP26 is such a crucial event.

This year’s COP, however, will be nothing like the dramatic 2015 conference. The outcome in Paris was uncertain up till the last moments. Diplomats, negotiators, civil society groups (including NRDC), industrial leaders, and others were actively engaged in down-to-the-wire discussions to hammer out the agreement in real time.

The stakes are just as high for COP26, but most of the drama has been playing out ahead of the meeting. As you read this, diplomats from the world’s major emitters are negotiating among themselves and with representatives from lower-emitting countries, while environmental groups and others encourage them to make stronger commitments to reduce carbon pollution. By the time the delegates land in Glasgow on October 31, most of those targets will already be settled and ready for ceremonial announcement at the podium.

So what can we hope for, and what can we expect from COP26? British Prime Minister Boris Johnson describes the goal as “coal, cars, cash, and trees,” and that’s a pretty good summary.

We must stop mining and burning coal, an indefensibly dirty energy source, as quickly as possible. The United States has been moving in the right direction, cutting coal consumption roughly in half over the past decade. And the United Kingdom, the host of COP26 and the birthplace of the coal-fired industrial revolution in the 1800s, now sources less than 2 percent of its power from coal. But to avoid catastrophic climate change, much more progress is needed, and civil society groups are pushing wealthier countries to completely phase out coal by 2030.

Vehicle emissions already account for about 15 percent of global carbon pollution, and transportation emissions are rising faster than other sectors. This is why phasing out the internal combustion engine and electrifying cars, buses, trucks, and trains are crucial to combating climate change as well as promoting public health. While the transition to zero-emission cars is already beginning to take off in some markets, saying goodbye to gas-powered vehicles by 2035 will require strong policies for countries and cities to electrify their fleets, spur innovation among manufacturers, and encourage consumer savings.

Carbon cuts raise a thorny equity issue. The industrialized world got rich over the past two centuries by releasing huge amounts of greenhouse gases into the atmosphere. Those riches put them in a much stronger position to both mitigate and adapt to the climate change that they fueled. Meanwhile, lower-income countries are more likely to suffer from a problem they did little to cause. To address this issue, the largest emitters committed in 2009 to provide $100 billion annually, starting in 2020, to help other countries meet their targets and adapt to climate impacts. Unfortunately, the donor countries are approximately $20 billion short of fulfilling their promise. At COP26, wealthy countries must instill confidence that they will deliver their long-standing cash commitment in full each year through 2025.

Fighting deforestation was a critical piece of the Paris Agreement, and the landmark accord established financial incentives for countries to preserve forests, which serve as vital carbon sinks. In 2018, however, forest loss still represented 8 percent of total global carbon emissions. The Amazon rainforest is in particular danger. In 2019, deforestation reached an 11-year high in Brazil and then increased an additional 25 percent the following year. The signatories to the Paris Agreement now face a critical moment: What will they do to make meaningful progress toward protecting the world’s most important carbon sinks so that their commitments are more than just paper?

“A strong outcome would be 2030 targets from all G20 countries to reduce emissions and keep the door open to 1.5 degrees Celsius, along with concrete policies to achieve those targets,” says Guy. “Plus a set of commitments and signals coming from major economic sectors. Transportation, for example, must commit to 100 percent zero-emission vehicle sales in the 2030s; energy must consign coal to history. And, let’s not forget, we need the money that was promised more than a decade ago.”

Now that you know what to watch for at COP26, stay tuned. The future of the world hangs in the balance.