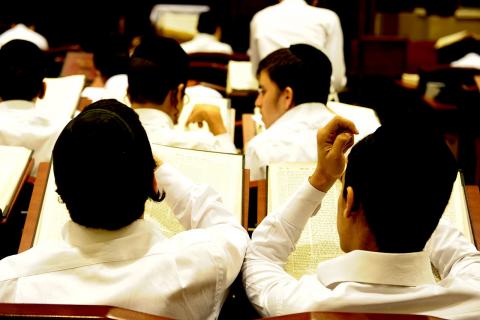 Israel is already changing demographically, but within a generation or two, it will experience a potentially seismic shift. According to a recent study by Prof. Dan Ben David at Tel Aviv University, the haredi community comprises approximately 9% of Israel’s population. His long-term prediction suggests that this figure will rise to about 35% by 2065.

This presents an enormous challenge to the government as well as Israeli society-at-large. With a projected overall population somewhere north of 16 million by 2048, there could be as many as 6 million haredim by 2065. With increasing concern about the haredi community’s socioeconomic standing and attitudes toward non-religious education, what does the future hold? Is the status quo unsustainable?

While grappling with these questions, it’s imperative that the conversation transcends short-term political concerns and focuses on a much longer game. Amid the current Rubik’s Cube of the coalition-building process, Israel’s politicians likely don’t have the time and energy to conceptualize the big-picture needs of demographic communities. But if political leaders can shift the emphasis for a moment from politics to the population’s well-being, it may bear sweeter fruit down the line.

In higher education, the disparities – both perceived and practical – are even more acute. This is why the Jerusalem College of Technology (JCT) works to create a paradigm shift in the haredi community. By elevating the standards of education for haredi young adults, we vastly increase their employment opportunities. There is far too much at stake to allow such a large and growing segment of the population to be left behind. Rising employment for haredim benefits not just haredim themselves, but Israel’s entire socioeconomic well-being.

We answered Prof. Ben David’s call long before he sounded the alarm on haredi education. By demonstrating to the haredi community that opportunities exist for balancing serious Torah study with high-level science and technology education, we help them strike a crucial balance that ultimately results in greater integration and harmony for Israeli society as a whole.

While the college still largely serves the national-religious community, there are today a significant portion of haredim in the student body, and the relations between the students have thus far been excellent. It is critical that our religiously sensitive campus environment enables our students to thrive academically, charting a course to fulfilling and financially viable careers.

Like many other communities within any larger population, haredim are not monolithic or homogenous. What they do have, however, is a strong sense of cohesion – and some 94% of haredim who grow up within the community remain within it as adults. Taking into account their far higher birth rate than any other demographic sector in Israel, it is clear that the haredi community’s fate and all of Israel’s medium-to-long-term future are strongly entwined.

Since its inception 50 years ago, JCT has maintained that providing high-quality STEM (science, technology, engineering and mathematics) education is the key to greater employment. This, of course, is equally true for the haredi community, who attain an 89% employment rate after graduation from JCT.

As a society, we must further investigate the ways in which we can more fully integrate the haredi community. It starts with a strong collective commitment to increasing opportunities for haredim to study secular subjects without compromising their religious beliefs. If demography is destiny, Israel truly has no other choice.