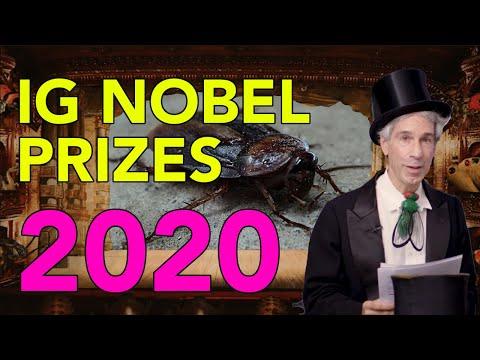 Certain scientific advancements—such as the discovery of penicillin or the structure of DNA—are such game-changers that the scientists behind them are honored and immortalized with a Nobel Prize. And then there is the sort of research that involves giving helium to alligators or identifying narcissists by their eyebrows.

Since 1991, these scientific misfits have found recognition by the Ig Nobel awards, a product of the Annals of Improbable Research. On Thursday (September 17), this year’s cohort of esteemed-ish honorees was announced via webcast.

While there is a world of difference in the Ig Nobel’s prestige and the prizes founded by Alfred Nobel, the two groups are not mutually exclusive, and there are scientists who are recipients of both.

The 30th First Annual (not 31st Annual) Ig Nobel Prize ceremony, held entirely online for the first time due to the ongoing coronavirus pandemic, celebrated truly jaw-dropping studies in 10 categories, six of which were presented by Nobel laureates:

Acoustics: Awarded to a team of scientists “for inducing a female Chinese alligator to bellow in an airtight chamber filled with helium-enriched air.”

Economics: Awarded to a team that studied “the relationship between different countries’ national income inequality and the average amount of mouth-to-mouth kissing.”

Entomology: Awarded to an American researcher who collected “evidence that many entomologists (scientists who study insects) are afraid of spiders, which are not insects.”

Materials Science: Awarded to a group of scientists “for showing that knives manufactured from frozen human feces do not work well.”

Medical Education: Awarded to a group of world leaders including President Donald Trump, Prime Minister Boris Johnson, President Vladimir Putin, and President Jair Bolsonaro “for using the COVID-19 viral pandemic to teach the world that politicians can have a more immediate effect on life and death than scientists and doctors can.”

Medicine: Awarded to doctors “for diagnosing a long-unrecognized medical condition: Misophonia, the distress at hearing other people make chewing sounds.”

Peace: Awarded to unnamed government officials from India and Pakistan who “surreptitiously [rung] each other’s doorbells in the middle of the night, and then [ran] away before anyone had a chance to answer the door.” Essentially, Ding Dong Ditch with diplomatic immunity.

Physics: Awarded to a team that discovered “what happens to the shape of a living earthworm when one vibrates the earthworm at high frequency.”

Psychology: Awarded to a pair of scientists “for devising a method to identify narcissists by examining their eyebrows.”

Winners receive a paper cube (which the recipients printed and folded themselves) and a note for $10,000,000,000,000. Not US dollars, of course, but a relic from the days of Zimbabwe’s hyperinflation. According to reports, this was the sum required to buy a loaf of bread in 2009.

Warmest congratulations to all of this year’s honorees!