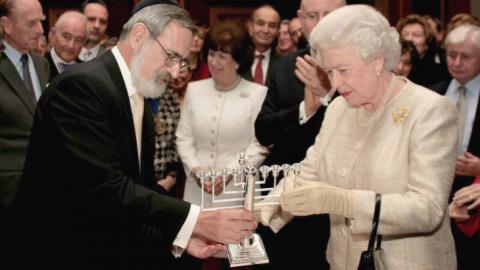 Queen Elizabeth II, the longest-serving monarch in Britain’s history who died on Thursday at the age of 96, ascended to the throne of the United Kingdom in 1952, embarking on a 70-year odyssey that ushered her nation into its postwar, post-imperial period.

No fewer than 15 British prime ministers were sworn in by the Queen, among them Sir Winston Churchill, who was born in 1874, and current incumbent Liz Truss, who was born in 1975. Her reign witnessed the twilight of the British Empire and its transformation into a Commonwealth alongside the development of a domestic welfare state. Married to Prince Philip, the Duke of Edinburgh, from 1947 until his death last year, the Queen leaves four children, eight grandchildren and 12 great-grandchildren.

The Queen long enjoyed a close and productive relationship with Britain’s Jewish community. Hailed in 2016 on the occasion of her 90th birthday by the late British Chief Rabbi Lord Jonathan Sacks for having “enriched our lives” through the “respect she has she has shown for all religions,” the Queen served as a patron of several community organizations, including the Jewish Leadership Council, the Council of Christians and Jews and the Holocaust Memorial Day Trust — the latter position gaining a special significance because of Philip’s wartime military service and the role of her mother-in-law, Princess Alice of Battenberg, in saving Greek Jews from the clutches of the Nazis.

Rabbi Sacks also recounted a 2005 meeting between the Queen and a group of Holocaust survivors at St. James’s Palace in London. “When the time came for her to leave, she stayed. And stayed,” Sacks recalled. “One of her attendants said that he had never known her to linger so long after her scheduled departure. She gave each survivor – it was a large group – her focused, unhurried attention. She stood with each until they had finished telling their personal story.”

Sacks added that this “was an act of kindness that almost had me in tears. One after another, the survivors came to me in a kind of trance, saying: ‘Sixty years ago I did not know if I would be alive tomorrow, and here I am today talking to the Queen.’ It brought a kind of blessed closure into deeply lacerated lives.”

Reflecting on the last two hundred years of British history at a Jewish charity event in 2015, the Queen’s successor, Prince Charles, emphasized that “there has always been one constant in the United Kingdom – a Jewish community which has organized itself to support those who need help and support.”

Added Charles: “During a year when many in the Jewish community have had cause to feel under threat, for no reason other than simply the fact of your Jewishness, your unity is all the more precious. Your commitment and loyalty to one another, and to society more widely, is ultimately what keeps you strong.”

As news of the Queen’s passing spread on Thursday, Jewish leaders from Britain and across the world paid tribute to the monarch. The Board of Deputies tweeted that it “mourns the death of Her Majesty, Queen Elizabeth II. No words can fully describe the extent of our nation’s loss; Her Majesty’s wisdom, benevolence and dedication to duty served as an inspiration to generations. May Her memory be for blessing.”

Ronald Lauder, President of The World Jewish Congress, said that Queen Elizabeth and her family “were beloved symbols of resistance to Nazi tyranny, refusing to leave London during the worst times of the Blitz and standing in solidarity under siege with their compatriots.”

Condolences also poured in from Israeli political and civil society leaders. “She leaves behind an unparalleled legacy of leadership and service. May her memory be for a blessing,” tweeted Israeli Prime Minister Yair Lapid.

President Isaac Herzog, who has Irish heritage, called the Queen “a historic figure.” “She lived history, she made history, and with her passing she leaves a magnificent, inspirational legacy,” he said in a statement released by his office.

The Queen’s funeral is scheduled to be held in ten days time, following a tour of the country by her oldest son, who now becomes King Charles III.