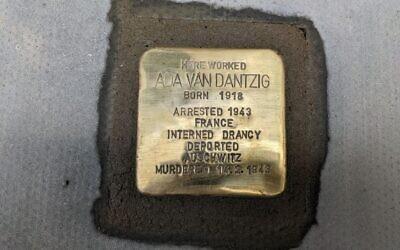 The U.K. is getting its first, and probably only, “stumbling stone” Holocaust memorial. In German, it’s called a “stolperstein,” and is part of a project to commemorate victims of the Holocaust with a small cobblestone and a brass plaque at the person’s last known home or place of work.

Since the project began in 1992, more than 100,000 stones have been placed in 26 countries across Europe, though none in the U.K., which was never occupied by the Nazis. But project organizers felt an exception should be made to memorialize Ada Dantzig, a Dutch Jew who came to London to study, and returned to the Netherlands to help her family flee the Nazis. She instead was captured and killed in Auschwitz.

In London’s Soho neighborhood, the stolperstein for Dantzig will be laid in front of 3 Golden Square, the former studio of Helmut Ruhemann, with whom she studied painting conservation. The ceremony will take place after nearly two years of delays due to the COVID-19 pandemic.

Organizers of the project said there were few people, who, like Dantzig, left the U.K. to rescue relatives and then were themselves killed in the Holocaust, so it will likely be the country’s only stumbling stone.

The creator of the stolperstein project, Gunter Demnig, a German artist, calls the cobblestones “stumbling stones” because they are designed to slightly catch your feet, though they are flush with the pavement surface. “You won’t fall,” Denmig told CNN in 2018. “But if you stumble and look, you must bow down with your head and your heart.”

He began the project as a one-off installation in memory of Sinti and Roma people. Thirty years later, the project is the world’s largest decentralized Holocaust memorial.

Dantzig and all her relatives, except for one brother, were deported to Auschwitz, where she and her parents were murdered on Feb. 14, 1943. A sister had been killed there two weeks earlier, and a brother was killed there two months later.

Demnig often quotes the Talmudic saying: “A person is only forgotten when his or her name is forgotten,” according to a statement from the Wiener Holocaust Library in London. “With this Stolperstein, Ada van Dantzig’s name, inscribed into the urban landscape of Soho, will be remembered.”