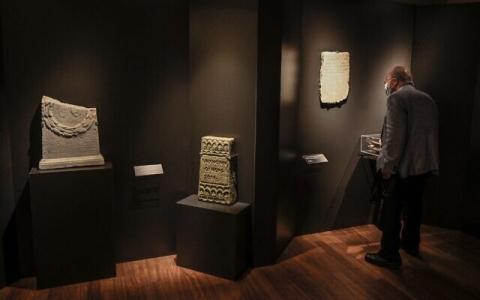 Exhibition features a Greek inscription referring to Jews dated to between 300 and 250 BC Little is known about the origins of Jews in Greece, but their presence dates back centuries and they were an "integral" part of ancient society, a new exhibit in Athens reveals. The show is a treasure trove of ancient inscriptions unearthed during more than two decades of research by the Jewish Museum of Greece.

It is the first time that the Jewish presence in the country has been confirmed as early as the fourth century BC — one of the oldest recorded religious and cultural settlements in Europe, according to the show's website.

Their existence proves the crucial role that Jews played in the social, religious, political and cultural life of ancient Greece, curators say. "The Jewish community is an integral part of Greek identity, a fact that has been too often denied for centuries," Greece's chief rabbi Gabriel Negrin told AFP on Monday at the exhibition's inauguration. "This history should be passed on to future generations in order to combat ignorance and prejudice."

The exhibition, which opened Tuesday, features a Greek inscription referring to Jews dated to between 300 and 250 BC. The precious piece was discovered at the sanctuary of Amphiareion near Athens, and makes reference to a freed slave from Judea. A total of 10 inscriptions are on display at the Jewish Museum, while another 29 are on display at the Epigraphical Museum, which is co-hosting the exhibition.