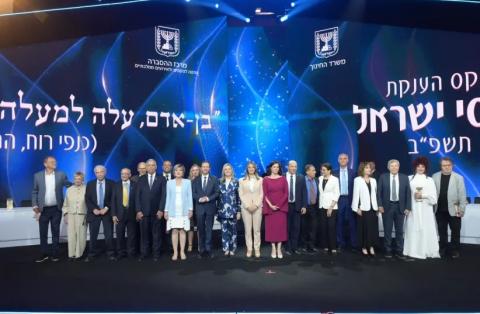 Wrapping up Independence Day celebrations, the Israel Prize, the country’s top civilian honor, was awarded on Thursday to ten citizens for their contributions to society, culture, and research. The diverse group of recipients included an actor, a songwriter, cancer treatment researchers and a woman who established a homeless shelter.

“Sitting here on the stage, their glorious achievements are a testament to their diligence and hard work, an expression of their heart and curiosity,” Shasha-Biton said. “Each and every one of you is a model for exceptional excellence and together you reflect the beautiful and diverse face of Israeli society.”

Mariuma Klein was honored for founding the Shanti House in 1984, a shelter for homeless and at-risk teens in Tel Aviv, that has helped thousands of people over the decades.

Berman “established a generation of scholars,” the prize selection committee said. “Her research and working methods she has developed now serve as an infrastructure for language development research worldwide.”

The prize for Entrepreneurship and Technological Innovation went to Prof. Yoram Palti, professor emeritus of physiology and biophysics at the Technion — Israel Institute of Technology for helping develop a groundbreaking treatment that fights various types of cancers using electric pulses. “This breakthrough required thinking outside the box and believing in one’s path,” the selection committee said.

Prof. Shimon Shamir was awarded the prize for his research in the Near Eastern Sciences. Shamir “laid the academic foundations for the study and study of the history of the contemporary Middle East in Israel,” the committee said. Among other achievements, Shamir set up the Israeli Academic Center in Cairo and in the past served as Israel’s ambassador to Egypt and Jordan.

Prof. Joshua Zack was awarded the prize for his work in physics and chemistry, including the development of the Zack Transformation and Zach Show, used in exploring electric conduction in a magnetic field, while Prof. Musa Yodim received the prize in Life Sciences Research for his “groundbreaking scientific achievements in the field of neuropharmacology.”

Renowned actor, director, and playwright Oded Kotler received the prize for theater and dance. “Kotler founded and managed groundbreaking institutions that have allowed voices from a variety of backgrounds to be heard, expanded the boundaries of the Israeli spirit, and enabled the development of original Israeli plays,” the prize’s selection committee stated.

He often evokes in his work the country’s political situation, including the conflict with the Palestinians.

Such reflections have made him at times a target of critics on the right. There was criticism of his selection for the prize with far-right MK Itamar Ben-Gvir of the Religious Zionism party calling it “shameful.”

Songwriter Avihu Medina was honored for leading “a significant breakthrough in Israeli music, for his excellent and high-quality work.”

Prof. Yoram Felti won the prize for entrepreneurship and technological innovation for his innovations in non-invasive cancer treatments.

In addition, Izzy Shretzky, owner of the Kiryat Shmona soccer team, was recognized for his special contribution to society and the state.

First awarded in 1953, the Israel Prize is presented annually in four categories — the humanities, science, culture and lifetime achievement — and is considered one of the highest honors in the country.

Israel this year marked 74 years since it was established in 1948. Last year’s Israel Prize distribution was marred by controversy after some government ministers, including Shasha-Biton, opposed giving the award to Prof. Oded Goldreich over his alleged support for anti-Israel boycotts.

Goldreich, a professor of computer science at Israel’s Weizmann Institute, received the Israel Prize at the offices of the Education Ministry last month after a nearly year-long dispute.