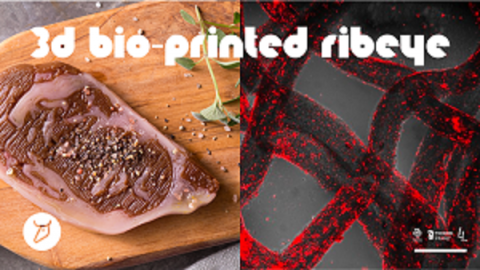 A bioprinted plant-based "scaffolding" helps the successful cultivation of edible muscle fibers, researchers from the Technion-Israel Institute of Technology have discovered. The development of cultivated meat, i.e. meat that does not involve the raising and slaughtering of animals, is a potential solution for the growing need for meat products following population growth, the environmental damage caused by breeding cattle, and the increasing awareness to animal welfare.

To fulfill the promise of cultivated meat to meet various consumer expectations, there is a need for technologies that allow for the production of whole muscle cuts that are as similar as possible – in terms of taste, smell, and culture – to those slaughtered from animals.

The process is outlined in a new article in Biomaterials by Professor Shulamit Levenberg and Ph.D. student Iris Ianovici of the Faculty of Biomedical Engineering, in collaboration with cultivated meat producers Aleph Farms.

Other partners in the research described in the article are Dr. Yedidya Zagury, Dr. Idan Redensky, and Dr. Neta Lavon. Researchers think that besides the scientific-engineering accomplishment, this technology is likely to enable the robust production of cultivated meat at large scale in the near future.

Levenberg became involved in cultivated meat several years ago after recognizing that her inventions in tissue engineering for medical needs were relevant for growing cultivated meat. Her research on the subject led to the founding of Aleph Farms, which sponsored the research study now being published. Last year, Aleph Farms presented the first cultivated ribeye steak in history – created in the Levenberg lab – and has since pursued the development of new products. Aleph Farms' CEO is Didier Toubia, Levenberg is Chief Scientific Advisor, and Lavon is the company's CTO.

The ability to produce a wide variety of cultivated meat products was the primary focus of the present research, which sought to develop the technology for creating thicker cultivated steaks while using alternative materials as "scaffolding."

Enabling the perfusion of nutrients across the thicker tissue has been a significant challenge, with most of the currently used scaffolding materials for growing tissues being derived from animals. In the article, the Technion researchers present a solution in the form of an alternative bio-ink, which is used to bioprint scaffolds from animal-free proteins, as well as living animal cells.

The bio-ink contains the cells that will form the muscle tissue – satellite cells originating from a biopsy taken from livestock, and is formulated by combining alginate (a compound found within the cell walls of brown algae) and proteins isolated from plants – soy or pea proteins. The printing process enables the creation of protein-enriched scaffolds with different geometries. The printing process is based on a method in which the bio-ink is deposited into a suspension bath that supports the materials during printing.

After the scaffolds were printed with the living animal cells, high cell viability was observed. Furthermore, the cells successfully matured to create muscle fibers as the tissue grew. Since the geometry of the scaffold can be controlled, it is possible to control the introduction of nutrients and the removal of waste from the developing tissue.

"In the engineering process we developed in the lab, we tried to mimic the natural process of tissue formation inside the animal's body as much as possible," Levenberg said.

"The cells successfully adhered to the plant-based scaffold, and the growth and differentiation of the cells proved successful as well. Our bio-ink led to a consistent distribution of the cells across the bioprinted scaffold, promoting growth of the cells on top of it. Since we used non-animal-derived materials, like pea protein, which is non-allergenic, our findings promise greater development of the cultivated meat market moving forward," she added.