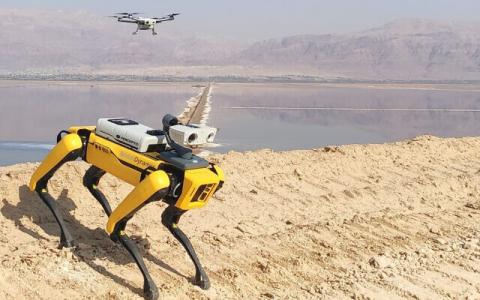 Four Israeli tech companies have been named in this year’s annual list of TIME magazine’s 100 Best Inventions for creations “that are changing how we live, work, play and think about what’s possible,” the publication said Wednesday. The global list of 100 “groundbreaking inventions” includes COVID-19 vaccines, a toy robot to support hospitalized children, a smart sneaker, a hidden breast pump, a new pasta shape, waterless haircare products and eco-friendly dye for jeans.

To compile the 2021 list, TIME asked for nominations both from its editors and correspondents from around the world and via an online application process. The jury then evaluated each contender on “key factors, including originality, creativity, effectiveness, ambition and impact.”

Every year, TIME highlights inventions that “are making the world better, smarter and even a bit more fun,” the magazine said.

1. OrCam Read, a smart reading support device developed by OrCam Technologies, the maker of artificial intelligence-based wearable devices to help the blind and visually impaired read texts via audio feedback. The company launched OrCam Read in 2020, a handheld digital reader meant to help people with language processing challenges, including dyslexia. The device (priced at $1,990) captures and reads out full pages of text and digital screens, and follows voice commands.

OrCam was founded in 2010 by Amnon Shashua and Ziv Aviram, who are also the founders of auto technology firm Mobileye, which was sold to Intel Corp. in 2017 for a whopping $15.3 billion.

The company is a repeat entry in the TIME’s 100 best inventions list, nabbing a spot in 2019 for the OrCam MyEye, an artificial intelligence-powered device that attaches to the frame of glasses and can identify faces or currency or read a text or other information aloud.

The OrCam Read was featured in the accessibility category.

The company was founded in 2014 by Dor Abuhasira, Sagi Blonder, Raviv Raz and Ariel Avital. It has a development center in Modi’in and offices in the US and Australia and employs some 75 people. Percepto says its solutions are used by Fortune 500 customers in more than 10 countries including Italy’s ENEL, Florida Power and Light, and Verizon.

“It is truly an honor to receive this award from TIME, a great and respected media brand for nearly a hundred years,” Abuhasira said in a press statement in response to the recognition. “Percepto created a new paradigm for industrial facility inspection by integrating AI and autonomous robot management with advanced visual data analysis. Being on this list is a testament to this accomplishment, and we thank the editors and staff at TIME for this recognition.”

Percepto was included in the artificial intelligence category.

Founded in 2015, SupPlant says it combines plant sensing, artificial intelligence and accumulated data to provide growers with irrigation recommendations to inform better decisions. The company claims that its product “dramatically enhances water use efficiency” as well as yield quantity and quality.

Its latest project is an irrigation platform that targets some 450 million smallholder farmers in India and sub-Saharan Africa.

SupPlant appeared in the sustainability category.

Founded in 2013, ElectReon’s wireless charging system uses copper coils laid beneath the asphalt to transfer energy from the electricity grid to the road and to manage communication with approaching vehicles. Receivers are installed on the floor of the vehicles to transmit the energy directly to the engine and the battery while the vehicles are on the go, doing away with concerns about limited driving range and short battery lifespans.

The company signed a new deal last month with the Tel Aviv-Jaffa Municipality and the Dan Bus Company to launch a large-scale commercial deployment of its wireless charging infrastructure to power electric buses in Tel Aviv.

This summer, ElectReon welcomed former Israeli president Reuven Rivlin as company president to “enhance the company’s collaboration with governments and global companies, as well as to share our activities with decision-makers around the world.”

ElectReon was founded in 2013 and is based in the northern Israeli community of Beit Yannai. It has a number of running partnerships in Europe to pilot its smart road tech in Germany, France and Belgium.

In Sweden, ElectReon has installed a 1.65-kilometer (1-mile) electric stretch used by a bus and a truck on the 4.1 kilometer (2.5 miles) route between the airport and town center of Visby on Gotland Island.

“We are honored by the recognition of ElectReon’s wireless charging solution by TIME as we work to spread awareness on the viability of this technology in maximizing fleet owner vehicle efficiencies, eliminating the cost of fuel, and reducing their full lifecycle carbon emissions,” said ElectReon CEO Oren Ezer in a statement. “As we rapidly scale our deployments around the world, we envision this technology to play a key role in accelerating the mass transition towards total
electrification and we look forward to continuing to build the transportation infrastructure of tomorrow with the ongoing outstanding support from our industry and governmental partners we have experienced until now.”

ElectReon was listed in the transportation category.