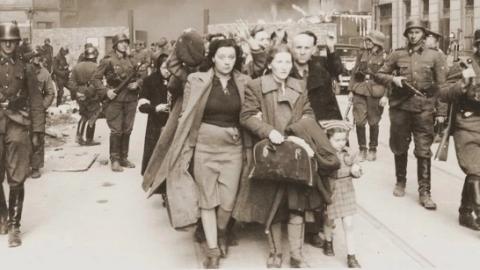 In a grassy patch of public park in central Warsaw last month, archaeologists dug up a rusted metal coat hook and the tangled chain of a decayed necklace. The objects couldn't be more ordinary. Or more extraordinary.

The team excavated them from the buried rubble of the Warsaw Ghetto, where German occupiers sealed hundreds of thousands of Poland's Jews into crowded, desperate squalor during World War II and over 80,000 died inside the walls of starvation, exposure and infectious diseases. Amid the twisted metal and bits of glass, the archaeologists unearthed small, unassuming remnants of daily life, suspended in hardened earth "like a time capsule," says Philip Reeder, a professor of natural and environmental science at Pittsburgh's Duquesne University and chief cartographer for the group working on the dig.

A fork. A light-green heart-shaped keepsake. A palm-size silver memorial medallion for a man named Nachum Morgenstern who died in 1880, inscribed in Hebrew. "It makes you think," Reeder muses of the tiny heart. "Did it belong to a child who lived in that house and most likely ended up dead when the ghetto was liquidated?"

The excavation -- organized by Poland's Warsaw Ghetto Museum and led by its research specialist Jacek Konik -- is part of a broader effort to fill gaps in Holocaust history using geoscientific tools. These include ground-penetrating radar; GPS systems; magnetometers, which study variations in Earth's geomagnetic field; and electrical resistivity tomography, a technique typically used for engineering and environmental investigations that images subsurface structures down as far as 660 feet (200 meters). Geoscience allows for what's called "non-invasive archaeology."

"Archaeology is the most destructive science on Earth," says Richard Freund, an archaeologist and professor of Jewish studies at Christopher Newport University in Virginia. "What's good about the geoscience is you don't destroy anything before you stick a spade in the earth. It's not very labor intensive and, most importantly, it's not very expensive."

Because these advanced tools identify and map historical sites without disturbing human remains, they also enable searches that honor the view held by some that digging up Holocaust graves disrespects the victims.

"It's a game changer for Holocaust studies," says Freund. He heads a multidisciplinary geo-archaeological research group aimed at unearthing lost Holocaust history to preserve the past and to protect the future from similar depravity. The group includes Geoscientists Without Borders, a program of the Society of Exploration Geophysicists that applies geoscience to humanitarian efforts.

"You get to tell the stories of people who can't." Philip Reeder, chief cartographer for the excavation team.

This summer in Warsaw's Krasinskich Park, a powerful metal detector turned up an anomaly that Freund's team thought could be part of the Ringelblum Archive, a vast undercover cache of documents collected by as many as 60 volunteers determined to bear witness to Jewish life in Poland under Nazi occupation. The archive contains tens of thousands of invaluable items that testify to terror and suffering, but also to courage and acts of defiance. Collated in secret, the archive itself represents one such act.

In 1946, one of the few survivors of the ghetto guided a search party to metal boxes filled with archive documents amid the ghetto's ruins. Polish construction workers building new apartments chanced upon two milk cans holding more archive material in 1950. Another milk can has long been rumored -- based on diaries like Ringelblum's -- to be hidden at the site of an old brushmaker's shop near the ghetto's edge.

The archaeologists had hoped the metal object detected this summer would be that missing piece. Instead, they dug into the rocky earth last month to find a large steel beam collapsed on top of brick walls. This was a letdown, but still a significant victory, as the other, more subtle artifacts they found carry their own historical and emotional value. "In many ways it's a somber experience," Reeder says of uncovering such everyday relics. "But in many ways it's an exhilarating experience. You get to tell the stories of people who can't."

Freund has led international teams exploring some 30 Holocaust-era sites in Poland, Latvia, Greece and Lithuania. There, researchers have mapped sites of mass burials and used radar and radio waves to uncover a 100-foot (30-meter) hidden escape tunnel leading out of a little-known Nazi extermination site at Ponar forest, known today as Paneriai. Eighty Jewish prisoners dug the tunnel over 76 nights using only their hands and rudimentary tools like spoons.

Just 12 prisoners managed to make it through the escape tunnel to the forest, with 11 surviving to recount constructing the passageway and squeezing through it to avoid massacre. But until Freund's team found the tunnel, there hadn't been physical evidence to reinforce the survivors' accounts.

More than 100,000 people died at Ponar, bullet by bullet, including 70,000 Jews, as well as Poles and Russians. The tunnel's discovery sheds light on another piece of the story: the tenacity and hope some prisoners still managed to harbor in the most unspeakable circumstances.

Electrical resistivity tomography images the ground's subsurface by assessing the transition of electrical charges at various depths. Because different materials conduct electricity in different ways, the ERT instrument can delineate between stone, sand, clay, organic material or open voids buried underground. It reports findings back to an attached monitor and, after processing the information with ERT-specific software, generates images that outline the shape of the underground finds.

In July, 21-year-old Christopher Newport University undergraduate Mikaela Martínez Dettinger stood in Krasinskich Park and watched tangible pieces of the past pulled from the ground attached to electricity-conducting metal ERT stakes as passersby rode their bikes and pushed strollers in the afternoon heat.

"The tips of [the stakes] were all stained terracotta orange, and it was because we had literally been hammering them into the rubble of the Warsaw Ghetto factory that was right beneath our feet," says Martínez Dettinger, a senior studying political science, philosophy and comparative religion who joined Freund in Poland as a research intern this summer.

"I never want to make it sound like I know what it would have been like to be in [ghetto inhabitants'] shoes," Martínez Dettinger added, "but you can feel in your heart the sorrow or the feelings of anger or persistence these people must have felt."

Martínez Dettinger, who wants to pursue a career in archaeology, worries her generation doesn't know enough about Holocaust horrors. She cites a 2020 national survey of Holocaust awareness among American millennials and members of Gen Z from 50 states. Of all survey respondents, 63% didn't know 6 million Jews were murdered and 36% thought "2 million or fewer Jews" were killed. Of those polled, 48% couldn't name a single ghetto or concentration camp.

This summer, visiting the most notorious of those camps, Auschwitz, Martínez Dettinger walked the path that prisoners took to the gas chambers where they took their last breaths. And she toured warehouses where prisoners sorted fellow inmates' suitcases and other personal effects. As she stepped off a gravel path onto the floor of one warehouse, she noticed the sound of her footsteps changing and realized she was standing on hundreds of buttons that had once fastened shirts, possibly like the one she was wearing that day.

"The science helps prove if atrocities have taken place and can be used to demonstrate war crimes." Alastair McClymont, geophysicist and member of the excavation team

With most Holocaust survivors now in their 80s and 90s, fewer and fewer are alive to share their memories. Holocaust deniers distort the facts of the mass extermination or claim it never happened at all. Earlier this month, a Texas school district came under fire after an administrator discussed with teachers the potential need to offer "opposing" views of the Holocaust, based on a new state law that requires teachers to present multiple perspectives when covering "widely debated and currently controversial" issues.

"The science helps prove if atrocities have taken place and can be used to demonstrate war crimes," says Alastair McClymont, a Calgary-based geophysicist and environmental consultant who joined the Ponar excavation in 2016 and just returned home from working on the Warsaw dig. "Holocaust education helps young people understand how important it is to protect human rights and keep democracies from failing."

"May this treasure end up in good hands, may it live to see better times. May it alarm and alert the world to what happened," 19-year-old Dawid Graber, one of the Jewish volunteers who hid the Ringelblum Archive, wrote in his last will and testament.

The Ringelblum Archive isn't the only trove of eyewitness testimony to survive the Holocaust, but it's considered the most comprehensive, valuable chronicle of Jewish life in occupied Poland, and a vital piece in the history of Jewish resistance. UNESCO included the archive in its Memory of the World register, alongside the original manuscripts of composer Frederic Chopin and writings by astronomer Nicolaus Copernicus.

Sealed off in November 1940, the Warsaw Ghetto confined more than 350,000 Jews, about 30% of the city's population, into 2.4% of the city's total area, or about 1.3 square miles. German SS and police forces liquidated the ghetto in May 1943 following the Warsaw Ghetto Uprising, a monthlong armed revolt of Jewish ghetto residents trying to prevent their deportation to death camps.

Before the ghetto's obliteration, the archivists -- a group code-named Oyneg Shabes ("Sabbath pleasure") -- strategically hid the archive, divided in three parts to increase the chance at least some of the documents might survive. They also transmitted to the Polish underground all the information they'd recorded about deportations and murders. The underground smuggled the materials out of the country so the free world could learn first-hand of the horrors taking place.

But as Warsaw was rebuilt post-war, some city maps shifted, and that has complicated the search for the archive's missing piece.

Using subsurface mapping techniques, Freund's team surmised that the wartime location of the brushmaker's shop at 34 Świętojerska Street doesn't correspond with the modern-day 34 Świętojerska Street, where the Chinese embassy now stands -- and where another team using traditional archaeology methods already tried, unsuccessfully, to find the missing part of the archive. The geoscientists concluded the old shop can now be found across the street beneath Krasinskich Park, countering long-held assumptions about the best place to search for the lost section of the archive.

At the end of one long workday in the park this summer, Martínez Dettinger found Freund sitting on an equipment bin, staring transfixed at a section of grass with pink flags stuck in it to indicate scanners had found an object of interest. She asked him a question, but he couldn't seem to summon the words to answer. "He could not take his eyes off the piece of grass, and he looked at me and goes, 'This could be the Ringelblum Archive,'" Martínez Dettinger recalls. "It felt like a moment out of a movie."

Last month's excavation might not have produced the cinematic scene the team envisioned, at least not yet. But they hope the Polish government will issue further permits so they can excavate more of the area they've identified as the former 34 Świętojerska Street.

"What we were unable to cry and shriek out to the world, we buried in the ground," the young Dawid Graber wrote. Now that Freund's team has pinpointed the original location of the brushmaker's shop, they're determined to make more silenced voices heard.

"The work," Freund says, "will continue."