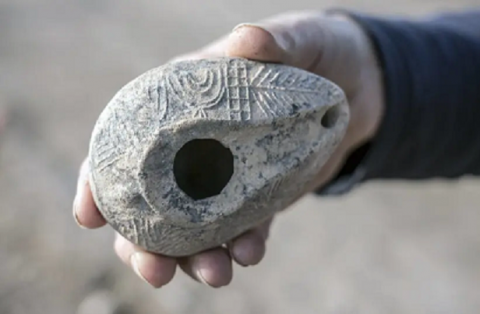 What was Jewish life in Israel like after Rome’s destruction of the Temple and Jerusalem? A new exhibition by the Israel Antiquities Authority in Kibbutz Ginossar’s Yigal Allon Center offers a glimpse of how the Sages managed to rebuild a community in the Galilee in the centuries that followed the great tragedy.

The “Sanhedrin Trail” features over 150 objects from the late Second Temple period and the following centuries, some of them on display for the first time, including an imposing stone engraved with a depiction of the Temple. It presents a deeper look into the hiking trail, inaugurated in 2017, connecting different sites from those centuries.

The Great Sanhedrin was the assembly of 71 Sages which acted as the supreme court for the Jewish people. After the destruction of the Temple in 70 CE, it was relocated several times, the Talmud recalls.

“The Sanhedrin was exiled in ten stages at the end of the Second Temple period and after the destruction of the Temple. This is known from tradition. It moved from “the Chamber of Hewn Stone, its fixed seat in the Temple, to Ḥanut, literally, shop, a designated spot on the Temple Mount outside the Temple proper; and from Ḥanut to Jerusalem; and from Jerusalem to Yavne;” reads a passage of the Rosh Hashanah Tractate (31a) as translated by the William Davidson Edition of the Talmud.

Located in the central part of the Land of Israel, according to Jewish tradition, “Yavne and its Sages” were the reward requested by Rabbi Yohanan Ben Zakkai to Roman general Vespasian after predicting that he would become the new emperor.

The history and life of the five centers in the Galilee, Usha, Shfaram, Beit She’arim, Tzipori and Tiberias is one of the focuses of the exhibition.

Artifacts on display include an oil lamp, inscriptions featuring the words ‘shalom’ and ‘shabbat’, and sages’ names such as Yaakov and Shimon in Hebrew and in Aramaic, and a hoard of silver and bronze coins from the time of the revolt against the Romans led by Shimon Bar Kokhba (132-135 CE), which was found in the middle of a burned building, suggesting the heavy toll that the conflict exacted even in the Galilee.

In addition, for the first time, the public is offered the opportunity to see the original Magdala Stone.

The stone was found in 2009 in Magdala, a large Jewish settlement during the early Roman period located on the western shore of the Sea of Galilee.

The excavation unearthed Jewish ritual baths (mikvaot), streets, a marketplace and industrial facilities – as well as a synagogue, whose walls were decorated with colored plaster, along with mosaic floors along the pavement. The stone stood in the middle of the synagogue’s main hall, portraying the Second Temple of Jerusalem, with a carved seven-branched menorah on one of its sides. It represented a crucial discovery because the depiction was engraved in the stone when the temple was still standing.

“The exhibition is unique, not only because of the fascinating finds on display but also because it provides a glimpse into the ‘behind the scenes' of their exposure,” said IAA general director Eli Escosido. “The display shows the people who found the artifacts, whether in excavation or in the various activities behind the creation of the trail.”

“Visiting the exhibition and walking along the Sanhedrin trail complement each other like moving along a two-way street, it allows us to travel in time into our history and heritage.”