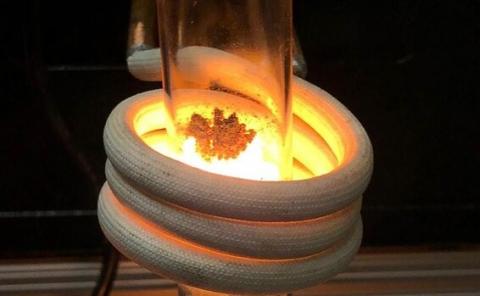 An Israeli startup is developing technology to extract oxygen from lunar and Martian soil to be used by future space missions. Helios, headquartered in Zur Yigal in central Israel, has been awarded funding by both the Israeli Space Agency and the Energy Ministry for a system slated for use in two missions scheduled for the next three years.

For the moon, Helios is designing a reactor into which lunar soil is fed and produces oxygen as well as various types of metal after processing. The process does not require materials shipped from the Earth, so it could serve as an instrumental part of self-sustaining human communities off-planet.

Over 50 lunar missions are planned for the next five years, all of which will require thousands of tons of oxygen, which comprises some 70% of the weight of rockets that propel shuttles into space.

Helios co-founder and CEO Jonathan Geifman explained that the startup's technology is part of a chain that will allow humanity to establish permanent communities on the moon or even other plaets. "So that we don't have to move endless amounts of equipment to the space station, causing life off planet Earth to get bottlenecked, we need to think in terms of infrastructure when it comes to producing raw materials from natural resources," Geifman said.

Director General of the Israeli Space Agency Avi Blasberger said, "Helios' revolutionary technology to produce oxygen from lunar soil with the need for raw materials from Earth will reduce the costs of the launch, expand the amount of cargo, and in future also allow long-term human presence in deep space.

"We foresee that the return to the moon entailing NASA's Artemis program will create major business opportunities for the space industry in general and the Israeli space industry in particular. Helios, which got its start as part of an entrepreneurial workshop during Israel Space Week, is an excellent example of a groundbreaking Israeli startup that will lead and take a central part in this developing trend," Blasberger said.