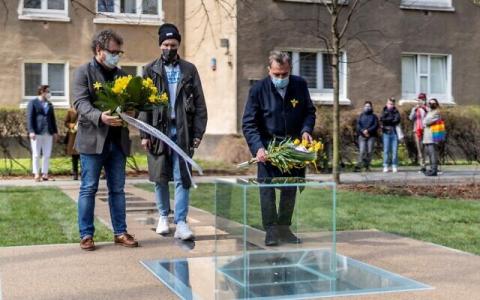 A new monument unveiled in Warsaw on Monday consisting of a glass cube above an underground chamber commemorates the extraordinary history of a Holocaust-era archive hidden by Jewish volunteers. The somber memorial has been erected on ground now surrounded by Soviet-era buildings where the trove of documents about life and death in the Warsaw Ghetto was buried in total secret in 1942.

Inside the cube is a page from the archive — a handwritten will by 19-year-old Dawid Graber, one of the volunteers who helped hide the documents from the Nazis.  The will, written on a page torn out of a school book, states that “what we were not able to pass through our cries and screams, we hid underground.”

The monument is being inaugurated on the 78th anniversary of the start of the Warsaw Ghetto Uprising — a failed revolt by hundreds of Jewish fighters against their Nazi oppressors in 1943. The Ghetto was created by Nazi Germany after its invasion of Poland in 1939 and enclosed 480,000 people — almost all of whom starved to death, died of disease or were murdered by the Nazis.

The Ringelblum Archive is the name given to some 30,000 documents gathered by Jewish historian Emanuel Ringelblum and his helpers that are now listed in UNESCO’s Memory of the World Register. It includes official documents and underground publications and statistics on those who died and the testimony of those who witnessed the horrors.

But it also provides insights into daily life by including rationing cards, medical prescriptions, theater programs, and candy wrappers. The monument’s creator, Lukasz Mieszkowski, said it was intended as a “time capsule” for future generations by those who buried it, with the hope “that this trove would witness better days.”

The documents were collected by a group of activists called “Oyneg Shabbes” (Sabbath Pleasure) and buried in metal boxes and milk cans. Without the archive, “the history of the Jewish Ghetto, of this terrible place, this hell on Earth, would never have been documented,” said Piotr Wislicki, head of the Association of the Jewish Historical Institute in Poland.

Only three members of “Oyneg Shabbes” survived the war and their testimony allowed the first part of the archives to be retrieved in 1946. A second part was found in 1950, but a third section was never recovered as the area was destroyed by the Nazis after the defeat of the Ghetto Uprising.

Today, the archive is on display in the Jewish Historical Institute in Warsaw, and all the documents have been digitized and are available online. “We have no testimonies as detailed as this,” said Aleksandra Engler-Malinowska from the Stacja Muranow Association, which aims to keep alive the memory of the Ghetto for the area’s current residents.

“That was the aim of those who put this together — to ensure that these documents could serve in future as part of a court prosecution,” she said. There are plans now to honor the members of “Oyneg Shabbes” with a monument at the Jewish Cemetery in Warsaw. The first stone was laid on Monday.