Facebook AI can translate directly between any of 100 languages 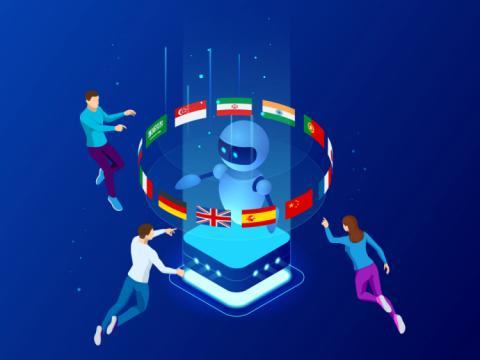 Facebook has developed an artificial intelligence capable of accurately translating between any pair of 100 languages without relying on first translating to English, as many existing systems do. The AI outperforms such systems by 10 points on a 100-point scale used by academics to automatically evaluate the quality of machine translations. Translations produced by the model were also assessed by humans, who scored it as around 90 per cent accurate.

Facebook’s system was trained on a data set of 7.5 billion sentence pairs gathered from the web across 100 languages, though not all the languages had an equal number of sentence pairs. “What I really was interested in was cutting out English as a middle man. Globally there are plenty of regions where they speak two languages that aren’t English,” says Angela Fan of Facebook AI, who led the work.

The model was trained by focusing on languages that are commonly translated to and from each other, grouping languages into 14 separate collections based on geography and cultural similarities. This was done to ensure high quality translation of more commonly used connections, and to train the model more accurately.

For some language pairs, the new system shows significant improvements over existing translation quality. For example, translating from Spanish to Portuguese is particularly strong because Spanish is the second-most spoken first language worldwide, meaning the researchers had access to a large amount of training data. Translation between English and Belarusian also improved over existing efforts because the AI learns from translating Russian, which shares similarities with Belarusian.

While the system isn’t yet in use on the social network site, Facebook plans to put it to work soon to handle the 20 billion translations made every day when people click “Translate” on posts written in more than 160 languages. Future work will be done on other languages, says Fan, “especially for languages where we don’t have a lot of data, like South-East Asian and African languages”.

The work “breaks away from the English-centric models and tries to build more diverse multilingual ones”, says Sheila Castilho of the ADAPT Centre at Dublin City University, Ireland. “That’s refreshing.” But, says Castilho, the human assessments only looked at a small fraction of examples, making it hard to know if this is an accurate judgement of how the AI performs.

She also worries that the evaluation was done by bilingual volunteers, rather than professional translators. “Non-professionals lack knowledge of translation and so might not notice subtle differences that make one translation better than another,” she says.

Her colleague at the ADAPT Centre, Andy Way, suggests Facebook isn’t making a fair comparison with state-of-the-art translation systems. “Their claim to have such a large improvement over ‘English-centric’ models is a bit empty, as most of the time, people don’t do this anymore,” he says. Facebook disagrees, saying translation through English is still commonplace.