New Sharansky Book: dialogue between Israel and the Jewish people 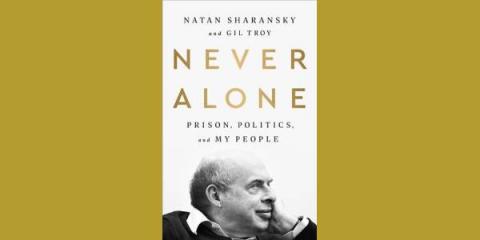 When Sharansky disputed the claim, Netanyahu explained: “They love an Israel that exists in their imaginations. But the real Israel, which can exist only if we defend ourselves, makes them uncomfortable, because it makes them unpopular with their president.”

Sharansky introduces his latest book, Never Alone: Prison, Politics, and My People, written with Gil Troy, by explaining to readers that it is “not exactly a memoir,” but rather “the story of the most important conversation of my life: the ongoing dialogue between Israel and the Jewish people.”

Sharansky spent nine years as a dissident in Soviet prison, nine years in Israeli politics as a minister and member of parliament and nine years as chairman of the Jewish Agency, prompting his joke that he’s the rare politician who went to prison before holding office. His book is organized in this three-part structure.

The Soviet prisoner period was covered well in Sharansky’s 1988 book Fear No Evil, but the new telling adds important details on the horrors and absurdities of communism. After his arrest in 1977, Sharansky endured more than 100 interrogations at the hands of an interrogation team of 17 officers.

Also new in this book is Sharansky’s telling of the tension between him and the Israeli government in 1976. The Israeli government wanted Sharansky to back off from participating in the Moscow Helsinki Group that was pressing the Kremlin for progress on a broad human rights agenda that went beyond emigration of Soviet Jews.

The book includes a devastating account of S. Daniel Abraham, “a self-made and generous billionaire who founded SlimFast,” urging Sharansky to fly secretly to Paris to meet “Syria’s future leader….He wants to bring democracy to the Arab world, quickly. He believes in human rights. He’s modern, sophisticated.” That was Bashar al-Assad, who Sharansky notes is today “known as the butcher of Syria, who mass murdered and even gassed his own people.”

Sharansky was a favorite of President George W. Bush, who awarded him the Medal of Freedom and took up Sharansky’s agenda of promoting freedom and democracy. This book is harsher on Bush’s successors. Donald Trump “followed Obama by abandoning dissidents,” taking “America’s human-rights-free foreign policy to absurd new depths,” Sharansky writes.

He does praise Trump for moving the American embassy in Israel to Jerusalem, recognizing Israeli rule over the Golan Heights and exiting the Iran nuclear deal under which the Obama administration flew “$1.7 billion in pallets of untraceable, non-US currency” to Tehran.

The book covers Israeli as well as American politics. Sharansky explains his opposition to Ariel Sharon’s unilateral withdrawal from the Gaza Strip. “In 2005, the prospect of expelling 8,500 fellow Israelis from the homes the state had encouraged them to build, so that Palestinian leaders could establish the world’s largest missile launching pad there, was too much,” he writes.

As chairman of the Jewish Agency for Israel, Sharansky was a key player in the Birthright Israel program that has brought more than 750,000 young Jewish adults to Israel. Sharansky describes it as “the biggest and most successful project uniting the diaspora and Israel.”

Perhaps as a result of that work, Sharansky has a special interest in what is happening on college campuses. Returning from one visit to America, he told Sharon that “the North American campuses had become the most important battlefield outside of Israel for the future of the Jewish people.”

He writes, on the basis of a 2010 focus group convened by pollster Frank Luntz, “Harvard and MIT Jews acted like Soviet Jews in so many ways…on these elite campuses were the early warnings of a hyper-judgmental, suffocating, campus-based fear society, rife with anti-Zionism, the New Anti-Semitism, where people who thought they were the freest Jews in history didn’t feel fully free.”

Even some American rabbinical students were turning against Israel, Sharansky says, citing Daniel Gordis reporting on how one such student “shopped for a tallit that was not made in Israel,” while “another added the creation of the state of Israel to a list of Jewish moments to mourn.”

The book concludes with a proposal for a global Jewish council to help unite Jews inside and outside Israel. And it includes Sharansky’s tips for coping with isolation, learned in prison but transferable to the coronavirus pandemic.

Among the pieces of advice: “always remember that you are part of something bigger than yourself.” Sharansky writes that after Israel’s victory in the 1967 war, he read a covertly‐circulated Russian translation of Leon Uris’s Zionist novel, Exodus. The book, Sharansky writes, “was a revelation. It drew me into Jewish history, and Israel’s history….It helped me see myself as part of the story.”

Perhaps Sharansky’s new book will have a similar, much‐needed, effect on some of today’s readers.