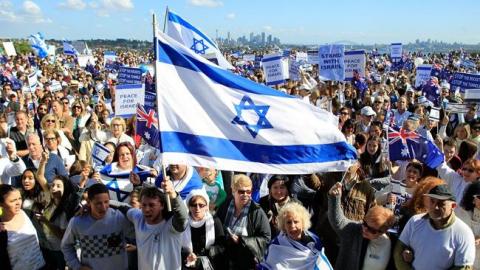 The government on Sunday approved what it said was the first-ever comprehensive plan geared toward securing the future of Diaspora Jewry, though few details about concrete measures to assist struggling communities outside of Israel were released.

The outline of the program was presented to the cabinet by Diaspora Affairs Minister Omer Yankelevitch, based on the findings of an advisory committee headed by Maxine Fassberg, a South Africa-born former senior Intel executive, and Moscow native Eugene Kandel, a Hebrew University professor and former senior economic adviser to Prime Minister Benjamin Netanyahu.

The committee started its work in early 2019, and was tasked with exploring ways to strengthen Israel-Diaspora ties and to adapt the Zionist project “to changing realities.”

Israel and world Jewry have appeared to move apart over the last several years, as a more progressive Diaspora has run into conflict with Israeli policies shaped by the country’s Orthodox-dominated religious leadership. Divisions have formed over shelved plans to open up the Western Wall to more pluralistic denominations, disputes over Jewish conversions and the Israeli government’s right-wing policies, leading to fears of a growing disconnect between liberal Diaspora Jews and Israel.

Kandel indicated that a main goal of the project would be bolstering the Jewish identity of those in Diaspora communities and battling assimilation. “In order to alter the trends, there is an immediate need for a long-term strategic process backed by resources from the Israeli government, in partnership with all world Jewish communities,” Kandel said. “Only thus do we stand a chance of preventing the collapse of many Jewish communities within a single generation, and the severance of ties between many young Jews and their People.”

A press release issued by Yankelevitch stressed the need to tighten relations between Israel and the Jewish world but failed to describe what concrete actions would be taken. The program to be created based on the committee’s recommendation “must focus on strengthening ties with Jewish communities worldwide based on an approach grounded in partnership, investing in formal and informal Jewish education, and reinforcing Jewish identity and the sense of connection to Israel through multiple channels,” it read.

While the effort appeared to be the first time the government had approved a strategic plan of this type, different Israeli bodies have in the past been tasked with the same goals of strengthening Jewish communities and boosting ties between Israel and the Diaspora. “The framework that was approved today will enable us to formulate a sustainable, long-term strategic program which is not dependent on any particular government,” Yankelevitch said.

The outline approved Sunday is officially called a “Comprehensive Strategic Framework for Ensuring the Continued Existence and Unity of the World Jewish Community.” It lists “tak[ing] a whole-of-government approach aimed at enhancing synergy among all the bodies involved in Diaspora affairs, the creation of an integrated global platform, and ensuring an appropriate allocation of resources.”

“We stand at a critical historical juncture with regards to the relationship between the State of Israel and the world Jewish community. Now is the time to decide whether we view ourselves only through the prism of the seven million Jews living in the State of Israel, or whether we see ourselves as one Jewish people, comprising fifteen million Jews around the world,” Yankelevitch said in a statement.

The coronavirus pandemic “sharpened the question of Israel’s commitment to Diaspora Jewry,” Yankelevitch went on, but did not outline how exactly Jerusalem intends to provide assistance to communities hard-hit by COVID-19.

A statement sent to reporters later on Sunday broadly outlined six areas in which the government intends to increase its activity: Jewish education, activities in Israel, Tikkun Olam (helping the world become a better place), innovation and technology, assessments and measurements, and common destiny.

The initiatives planned under the new outline will be implemented “in full cooperation” with the Foreign Ministry, the Immigration Absorption Ministry, the Jewish Agency and other national institutions, as well as “philanthropists and Jewish communities around the world,” her office said.

Jewish Agency chairman Isaac Herzog praised Yankelovitch for bringing the plan for government approval, predicting that it would lead to a “paradigm shift in Israel-Diaspora relations, and which stretches out a hand [of support] to the Jewish people in times of a difficult crisis.”