New educational game for children about the Holocaust 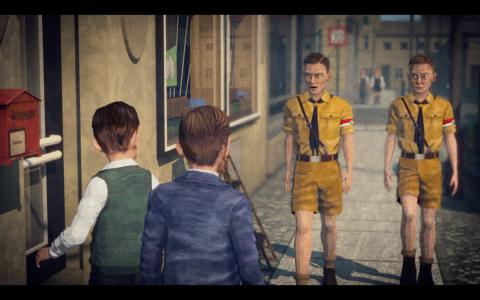 A new app for elementary school students allows users to follow the life of a Jewish boy through 1930s Berlin, the Jewish News reported. Called The Journey, the app is funded by the British government and developed over a three-year period by the National Holocaust Centre and Museum (NHCM), and is based on the NHCM Journey exhibition.

The app was made available for Apple devices, and will be made available for Android during the summer, the Jewish News reported.The game lets users step into the shoes of Leo, a young boy growing up in Berlin under Nazi rule, who is eventually forced to flee. The game's story covers the span of five years of events in ten animated episodes, which paint a picture of the lives of Leo and his friends and family, building up to Kristallnacht and when Leo must decide to stay in Nazi Germany with his family or escape on board the Kindertransport.

This is done by exploring 360-degree virtual environments.Much of the gameplay is focused on discovering hidden objects, answering questions and following a list of objectives and events – done in the form of a diary – after which they would progress to the next stage. The core of the game is to serve as an educational tool for students, primarily those aged nine to 11. "The Journey will grip you, sadden you… to make you think," the games page on the Apple app store states. "Explore themes of kindness, decency and empathy. What is it like to be thought of as ‘different’? What courage does it take to stand up for our friends even if they are ‘different’?

What does it mean to live in a society that is decent? You will face all these questions as you advance through episodes encountering loneliness, bullying and finally, threats to Leo’s life from people he thought he could trust… but who changed when the Nazis came to power. "The developers were helped when crafting the story and game design by survivors and family members of those who went on the Kindertransport during the Holocaust.

“They were consulted as part of the process and the fictitious character Leo is a composite of all of their real-life experiences,” an NHCM spokesman told the Jewish News.“[The Journey] gives primary school children an experience of what it was like for children of their age at the time of Hitler’s Reich,” said Holocaust survivor and Kindertransport refugee Ruth Barnett, who was involved in the game's development. “The possibilities for a user of this app are many times greater than those in the exhibition and as it can be downloaded into individual computers, there will be no time limit as there is in taking a group round the exhibition.

”The development of the app is notable not only from an educational standpoint, but also from the perspective of the medium of video games. While there is no shortage of video games on consoles, PC or smartphones that are set in World War II and either focus on military efforts (for example, much of the early Call of Duty games, as well as the Sniper Elite series) or on life under Nazi occupation (2009's The Saboteur), the Holocaust has received little to no attention in the medium.

The debate over whether to depict the Holocaust is controversial among those in the industry, with many feeling the topic is inappropriate. However, some have felt that to not include it would be a disservice as audiences are mature enough to handle the sensitive topic. In 2017, Call of Duty: World War II made headlines with its promise to depict the Holocaust in the game. "We didn't want to shy away from history. We wanted to be very respectful of it," senior creative director Bret Robbins said during a recent interview, Mashable reported.

"Some very, very dark things happened during this conflict and it felt wrong for us to ignore that."Earlier in 2014, Wolfenstein: New Order took a big step forward with its portrayal of both the Holocaust and a concentration camp, as well as an effort to portray society under Nazi rule in a fictional 1960s after a Nazi victory in World War II. Though the setting was far from realistic – with Nazi killer robots among one of the many leaps of logic – it made a concerted effort to capture Nazi ideology to remind players of the horrors of their rule and of the war itself, for all of those involved.

It seems that this game, while still targeted for children as an educational game, could help pave the way for greater awareness and respectful handling of the Holocaust, as modern gamers and children alike are ready to handle showing the horrors of the Holocaust in Nazi rule, particularly amid rising instances of antisemitism.Speaking about The Journey, NHCM chief executive Marc Cave said: “This is 21st Century storytelling and distribution aimed at a problem that society has continuously failed to solve since the 20th Century and indeed many centuries before that,” the Jewish News reported.