Despite pandemic, Israel Aerospace Industries saw over a billion in sales in the year's first quarter 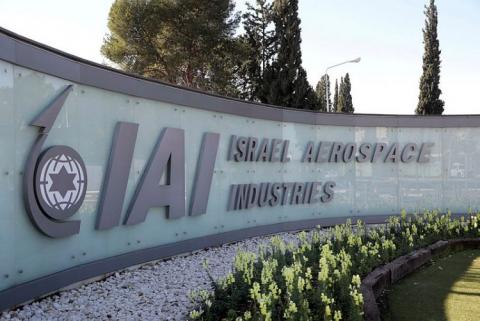 The Israel Defense Forces has in recent days held a video conference—the first of its kind—with militaries around the world to discuss insights on technological trends and operational issues during the coronavirus pandemic. Lt. Col. O, from the J6 (teleprocessing) and Cyber Defense Directorate, which organized the conference, told JNS that about 60 participants from 19 countries in 45 locations took part.

“The organization principle was, first of all, to be in touch at a time when there are no delegations and no outbound travel since March,” explained the officer. “This contact is very important for us.” The aim of the conference is to create a community of knowledge for information-sharing in the pandemic era, he added, allowing participants to also see, hear and speak to one another, while sharing valuable lessons.

Countries that took part included the United States, Britain, Thailand, Cyprus, Greece and several others. The video conference featured lectures by IDF representatives who outlined ways in which the Israeli military’s J6 and Cyber Defense Directorate adapted itself, as a technological unit, to the coronavirus restrictions. “We explained how the unit accesses data on platforms, how it changed its modus operandi in working from home and what tools were needed for this. How we manage a routine of remote learning and the ways we had to think out of the box to provide unique solutions,” stated Lt. Col. O.

The IDF participants shared insights on remote personnel management, the development of specialized applications to suit the social-distancing regulations, such as the one developed for the families of fallen soldiers in the absence of Remembrance Day events this year, and the unit’s support for national efforts.

Presentations also included ways that the directorate supported the IDF Home Front Command technologically, in addition to the creation of a database support tool for the medical system. The conference saw generals, colonels and lieutenant colonels from around the world participate, with other militaries presenting their own ways of coping with the times.

The conference discussed cyber-defense efforts in recent months as well. “It was a highly fruitful dialogue,” said Lt. Col. O. “It underlined how small the world ultimately is. When modern militaries in Europe, Asia, the East and the West are all dealing with the same challenges, it becomes clear that we are part of a global village.”

‘Our challenges have not changed’

Officers from the IDF’s software unit, Shachar, and the broader Unit for Telecommunications and Information Technology (known by its Hebrew acronym, Lotem), provided examples during the conference of digital-transformation processes and how to handle digital command in the cyber era.

They discussed how commanders must deal with sudden equipment requirements, how colonels remotely manage their subordinates, and ways in which career officers functioned when their partners lost their jobs and their children were out of school and at home.

Making information accessible was a common theme throughout the IDF presentations.

The international participants took special note of the Israelis’ agility and speed of adaptivity, which occurred despite the firm observance of information security protocols. Due to the singular security demands and location of the Jewish state, the IDF did simply did not have the option of closing bases and telling personnel not to show up for a month, noted the officer. As a result, it created “capsule” solutions for smaller teams in one space, alongside new secure remote working channels.

“We won’t harm our own operational tempo because the challenges have not changed. We still need to maintain a high alert,” he said. “Our challenges in cyber defense and the broader military-regional challenges have not changed. We have to monitor enemy networks continuously.” “This won’t be the last event of its kind,” said Lt. Col. O. “The dialogue was very important. We all share defense challenges and the need to protect information. We are all obligated to change.”

He added that “the idea of doing these things remotely is very comfortable. It is easy to organize. We are probably not far from the time that another military will take up the initiative and host the next conference.”

‘Improve readiness for the future’

Meanwhile, just as that conference took place, the IDF also held a study forum on the fight against the pandemic, in which officers presented interim conclusions and preparations for a potential second wave. The conference was led by the Chief of the General Staff, Lt. Gen. Aviv Kochavi, and saw the participation of the General Staff Forum and other senior commanders.

As part of the conference, case studies from units whose activity changed due to the virus were presented. The Commander of the elite Sayeret Matkal special force, Col. J presented ways in which the unit operated to assist the testing system. The head of the Research and Development Department in the Intelligence Directorate, Col. N, discussed the activities of the National Information and Knowledge Center that was set up to deal with the pandemic.

Following the study forum, as ceremony units were awarded with certificates for their efforts in maintaining functionality, as well as for projects designed to support the civilian economy and provide medical assistance.

“You were called to the mission during the outbreak of the pandemic, and you reported for duty,” said Kochavi. “Various efforts were made across the country—combat soldiers in the streets of Bnei Brak and Jerusalem distributed food; troops assisted in public outreach efforts; commanders assisted the local municipalities, hotels and hospitals; and the technological units toiled day and night to develop methods and advanced measures to support the effort.”

“The IDF does not rest,” he said. “We learn, review and draw the relevant conclusions to improve our readiness for the future, as part of the preparations for a second wave, with the hope that it will not come.”