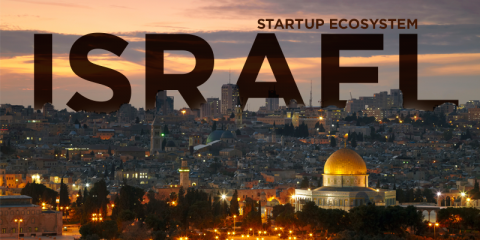 Israel has been named as the third leading start-up ecosystem worldwide in the latest edition of research center StartupBlink's annual ecosystem rankings report. Evaluating innovation ecosystems in 100 countries and 1,000 cities globally, StartupBlink ranks locations according to the quantity and quality of start-ups and supporting organizations, and factors related to their business environment, including ease of doing business and investment.

Israel climbed from fourth to third place in the 2020 rankings, overtaking Canada and sitting behind only the United States and the United Kingdom at the top of the index. The Tel Aviv area, known for being the hub of Israeli innovation, was ranked as the seventh leading city for start-ups worldwide, falling one place since the 2019 rankings due to the recent rise of Beijing.

Jerusalem rose three places to be named the world's 55th leading start-up city. Also, among the top 200 global start-up ecosystem cities were Haifa, which jumped 35 spots to 143rd place, and Beersheba, which slipped 19 places to rank 199th. The world's three leading cities remained without change in the 2020 rankings: San Francisco Bay, New York and London. They were followed by Boston and Los Angeles.

"Israel is known as the 'start-up nation' for a good reason," the authors of the report said. "It is a relatively small country which makes a substantial impact on the global start-up ecosystem. "To maintain its "outstanding rankings going forward," the authors said Israel must ensure that Tel Aviv remains a global hub of innovation in the face of growing competition; try to grow Jerusalem and strengthen the rankings of other cities; and improve its business environment.

New Israeli entries into the top 1,000 cities were Yokneam, noted for managing tax benefits in a cost-efficient way; Eilat, due to its focus on agro-tourism; and Ashdod, cited as an alternative location for innovation characterized by a lower cost of living. "There are a wide variety of verticals where Israel excels, from autonomous driving (Mobileye, Waze), advertising (Taboola), services (Fiverr), and much more," the authors of the report said. "One vertical that is maturing and shows substantial potential is cybersecurity, leveraging on the unique challenges Israel’s army faces.

"Moreover, the authors said, Israel represents a "shining example" of innovation to other countries courtesy of its ability to become a global hub despite a complicated geopolitical environment, and substantial tax revenues earned by the country from exits and high salaries.All this was done without public sector guidance, the authors add. Yet the local ecosystem has hugely benefited indirectly from "the creation of the world's biggest start-up accelerator" – the Israeli army.