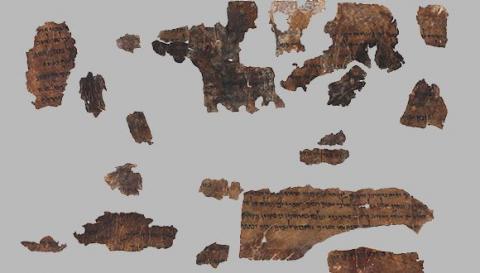 At least some of the Dead Sea Scrolls were most likely not manufactured locally but made their way at some later point to the unique community that amassed the library in the Qumran Caves, a project extracting and analyzing the DNA from the parchments has revealed.

For decades, scholars have been debating the origin of the extraordinary collection of hundreds of manuscripts collated in the heart of the Judean Desert. The seven-year-long endeavor carried out on about 35 fragments has opened new horizons into a possible solution to the mystery, as well as many other enigmas – including how to piece together fragments which might have belonged to the same scroll.

The idea of the project emerged by chance when Prof. Oded Rechavi, a geneticist from Tel Aviv University’s George S. Wise Faculty of Life Sciences, and Prof. Noam Mizrahi of TAU’s Department of Biblical Studies sat together at dinner during a retreat for new members of the faculty, and started discussing how two distant fields could work together.

“We came up with the idea of using the genetic information of the skin they were written on to investigate the possible connection between different fragments,” Rechavi told The Jerusalem Post.In years that have seen the field of ancient DNA booming, that first conversation became a major international cooperation that came to involve the Israel Antiquities Authority, Uppsala University in Sweden and Weill Cornell Medicine in New York – and whose findings were published as the cover story of the journal Cell on Tuesday.

The first challenge that the researchers had to face was the actual extraction of the DNA from the scrolls.“It was not entirely clear to us that doing it was at all possible: the process of turning skin into parchment, as well as 2,000-year-long aging, damage the DNA significantly,” Rechavi said. “Moreover, we could not just take a fragment and chop it apart.”As explained to the Post by Pnina Shor, founder of the IAA Dead Sea Scrolls Unit, which is in charge of preserving the artifacts, no attempt to extract the DNA from the parchment had been done in the past two decades precisely to avoid its potential destructiveness.

However, this time the team felt that the process could be carried out, by finding the right balance between protecting the scrolls for posterity and allowing scholars to open a new and rich field of study.The activity of sampling the manuscripts to provide the geneticists with the material to analyze was tasked to the team’s conservators, the only ones who are allowed to touch them. “We had to be very careful, but between the first fragment we sampled and the last one, we realized that we could also just scrape the back of the scroll and it would give us enough material to be analyzed, so either we did that or we cut a minute piece of the parchment,” Shor explained.

ANOTHER CHALLENGE was represented by the fact that over the course of the centuries, the scrolls had been contaminated by different animals, bacteria and humans who handled them in antiquity as well as in recent years.“We had to filter out all those residuals using computational tools and algorithms,” Rechavi explained. Once the major challenges were overcome though, the findings of analysis of the very limited amount of scrolls – chosen because of their significance vis-à-vis issues that scholars had been grappling with for decades – have proven extraordinary.

Almost all the fragments analyzed turned out to be made out of sheep skins, a species compatible with the desert environment, yet the parchment of two fragments was identified as cow hide, which represented one of the most crucial results of the project. “Cattle breeding in principle is not possible in the desert, as cows require a lot of grass and water – therefore most likely those parchments were not produced locally but brought from outside,” Bible scholar Mizrahi said.

“This is very important because there is a long-standing debate among scholars about the provenance of the Dead Sea Scrolls and which ones might be reflective of the very peculiar world of the extremist Jewish sect that probably resided in Qumran, and which ones were brought from the outside and potentially reflect the broader Jewish society of the period. ”Moreover, one of the two fragments written on cow hide, featuring some text from the biblical book of Jeremiah, was previously believed by many experts to be part of the same scroll of another two fragments from the same book.

However, the research proved that this was not possible, as the parchment was different.The researchers did not stop at the animal species: they were able to ascertain more than whether two fragments were made of parchment manufactured from the same animal or from genetically related animals. “This allowed us to cluster together some scroll pieces and to separate others,” Rechavi said.“We can now compare this classification with others proposed in the past on the basis of philological evidence,” Mizrahi added.Among the fragments analyzed was a scroll uncovered in Masada featuring the Song of the Sabbath Sacrifice, considered very connected to the Qumran community.

The artifact confirmed one of the pillars of the theory that refugees from Qumran made their way to Masada after its destruction by the Romans in 68 CE. However, that parchment was created using the skin of a sheep that seems genetically unrelated to the ones used for the Qumran copies examined, suggesting that the scroll was actually not originally from there. “Another aspect is that if the text in Masada was not from Qumran it was probably brought there from elsewhere, hence the song was known beyond Qumran in Second Temple Jewish society,” Mizrahi said.

“This might represent the missing link between this text and later mystical traditions bearing some similarities. We might have here one of the roots of Western mysticism.”IN OTHER areas, the DNA analysis supported theories proposed in the past.It confirmed that most fragments classified under what is known as “Qumran Scribal Practice,” a philological classification to distinguish between manuscripts considered specific to the Qumran community from general Jewish manuscripts, were written on the skin of genetically related sheep.

In the future, the team aims to analyze more fragments, but also to understand more about the genetics of the species used to produce the parchment in ancient Israel, for example, by extracting from contemporary animal bones. “As time passed we understood the challenges better, including the computational ones,” Rechavi explained. “We hope we will proceed faster now.

”With about 25,000 fragments still waiting, many enigmas are still to be solved, including the largest of all: who wrote and assembled those unique manuscripts, which 2,000 years later have offered the world the rarest glimpse into the ancient Jewish world before the exile?