Ten ‘catastrophic’ threats to our survival 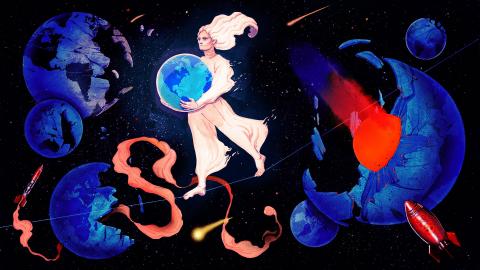 The current pandemic may have shifted our focus, but we cannot ignore 10 “catastrophic and existential” threats to human survival, a new report warns. The call for global, united action to address this crisis is published by the Commission for the Human Future, a body of concerned citizens and experts chaired by John Hewson from the Australian National University.

They list the threats as extinction and eco-collapse, resource scarcity, nuclear arms race, climate change, global poisoning, food system failure, pandemic diseases, uncontrolled technologies, overpopulation/megacity collapse, and denial and delusion. To be clear that the description of these threats is not arbitrary, they define a catastrophic risk as “one that menaces human civilisation in general” and an existential risk as “one that may potentially extinguish the human species”.

The complex risks highlighted by the report have been long germinating. “The human species’ ability to cause mass harm to itself has been accelerating since the mid-20th Century,” it says. "Global trends in demographics, information, politics, warfare, climate, environmental damage and technology have culminated in an entirely new level of risk.”

The warnings have been escalating too, from wildfires, floods and droughts to mass extinction, food insecurity, wars and pandemic diseases – “a wake-up call that our very way of life is at risk”. The threats posed by climate change, ecosystem collapse, biodiversity loss and dwindling water supplies – no surprise to scientists who have long tried to sound the alarm – have gained increased traction in public awareness.

Pandemic risk has now hit the world stage with a bang – although the warnings have been around for two decades, says Julian Cribb, a science writer who has been investigating the planet’s growing crises for 15 years. Pollution and chemicals are another major problem, poisoning land, water, animals and humans. Agricultural practices do more than their share of destruction, and ignorance of soil loss, declining water supplies, ecosystem decline and poor nutrition is threatening food security, which is on a “knife-edge”.

Food insecurity is the binding threat that connects all the others, the report notes, quoting a Spanish saying, “There are only seven meals between civilisation and anarchy.” Cribb suggests that overhauling the food system provides an opportunity for world peace: “When people have a full stomach, they don’t fight.”

Indeed, the report notes that two-thirds of wars over the past century arose from disputes about food, land and water. The nuclear arms race is possibly the greatest impending threat, with 2000 of the world's 13,890 nuclear weapons on high alert for pushing the button and a “capacity to destroy the human future in an afternoon”. “Detonating less than 1% of this arsenal would cause an abrupt ice age and a global famine affecting everyone.”

Other emerging threats are posed by dangerous new technologies – such as robot killing machines, biotechnology, nanotechnology and electromagnetic radiation – and widespread denial of scientific evidence. Underpinning much of this is the dinosaur in the room: unsustainable population growth leading to ballooning demand for precious resources and environmental degradation, fueled by an insatiable appetite for profits and consumerism. Yet, no government has a policy in place to address these man-made problems, says Cribb, with efforts piecemeal at best.

Solutions do exist, but the report stresses they must all be solved together because the threats are interconnected. Addressing them thus needs to ensure that none of the solutions worsen any of the other threats. “The ten catastrophic risks are all part of a system that humans have, generally without intention, created. “This means that the risks must be understood and analysed as a complex, interconnected system – not as standalone threats, to be dealt with one by one.”

All the systems we take for granted – economic, food, energy, production, waste and governance systems – and the way we relate to the Earth’s natural systems “must all undergo searching examination and reformation”. The COVID-19 pandemic has shown how a catastrophe can strike out of the blue, highlighting our vulnerability and lack of preparedness.

It has also demonstrated that radical action is possible, presenting an “unprecedented opportunity” to reconsider humanity and its impact on the planet. “After the storm, the global and societal landscape will have changed,” the report says. “We cannot resume business as usual and would be wise to prepare for sweeping change.”

And it needs people from all walks of life – from scientists and leading thinkers to indigenous communities, young people and female leaders – to come to the table, share views and solutions and take individual and collective action. “We recognise that solutions to these great risks depend not just on government policy and corporate activity, but also on the actions of billions of individual people in their daily lives,” the report says.

This includes our current behaviour, as well as applying pressure to governments and corporate bodies, “to achieve the kinds of changes that are really necessary to defuse the catastrophic threats. “What we lack at present, is any kind of coordinating, unifying spark.”

The report marks the beginning of a series of round tables that will be shared globally, exploring each of the ten catastrophic threats and identifying solutions that everyone seeking a safe, healthy future can embrace.