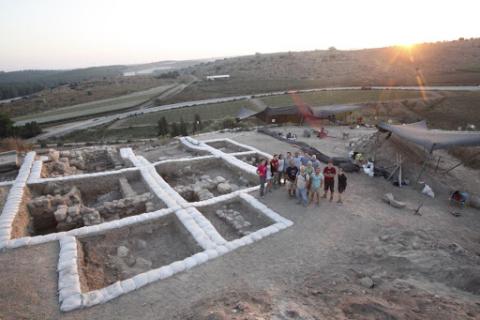 A Canaanite temple and many artifacts have been uncovered in a city that, according to the Bible, was destroyed by the Israelites when they entered the Land of Israel after 40 years in the desert. The discovery shed light on the extensive ruins of a structure dating back to the 12th century BCE in Lachish, the Hebrew University of Jerusalem announced Monday.

The team was led by Prof. Yosef Garfinkel from the university’s Institute of Archaeology and Prof. Michael Hasel from Southern Adventist University in Tennessee. It presented its findings in The Journal of the Council for British Research in the Levant. “Joshua proceeded with all Israel to Lachish; he encamped against it and attacked it. God delivered Lachish into the hands of Israel. They captured it on the second day and put it and all the people in it to the sword,” reads Joshua 10:31-32.

Among the crucial findings were a pottery shard featuring the Hebrew letter samekh, which represents the oldest-known engraving of the letter, gold artifacts and cultic figurines, including figurines depicting the warrior god Ba’al, who is mentioned dozens of times in the Bible – including several instances where the Israelites turn to its cult in spite of the commandments of God.

The site of Lachish was first identified in 1929 by William Foxwell Albright, who is considered the founding father of Biblical archaeology, Garfinkel told The Jerusalem Post. “The city was a major Canaanite center city, as we know from historical sources,” he said. “There is no other site in this region as prominent. It is the right location, the right place, and the name ‘Lachish’ was found on some inscriptions found there.”

Garfinkel’s team first started excavating the site in 2013. “We uncovered the temple and we dedicated three or four years to it, because it is very rare to find Canaanite sites in Israel,” Garfinkel said. “This kind of structure was only discovered in Megiddo, Nablus and Hazor. But this is the first time we revealed such a large monumental symmetrical kind of temple.”

The square-shaped layout of the building featured a compound in the front marked by two columns and two towers leading to a large room, as well as an inner sanctum with four supporting columns and several unhewn “standing stones” that might have represented the different gods worshiped. In addition, it presented numerous side rooms.

One of the research questions the team pursued in Lachish was connected to the time of the Kingdom of Judah, specifically whether the Bible contains historical memories about the 10th century BCE and whether King David can be considered an historical figure.

“The Bible says that Rehoboam, the grandson of David, fortified 15 cities, including Lachish,” Garfinkel said. The first researchers examining the site did not manage to uncover fortifications from the period, prompting many scholars to doubt the validity of the description presented in the Biblical book of Chronicles II, he said.

However, Garfinkel’s team was able to locate the fortification from the relevant period, also discovering houses, floors and pottery inside the city, whose dating was confirmed by carbon dating at around the late 10th century BCE. “This is why we went to Lachish. It was our goal,” Garfinkel said.

His team also managed to locate some inscriptions at the site for the first time in 40 years, along with an especially rich collections of objects such as daggers and ax-heads adorned with bird images, bronze cauldrons, jewelry, scarabs and a gold-plated bottle featuring the name of Egyptian Pharaoh Ramses II.

The Book of Joshua states that the Canaanite city was destroyed by the Israelites. Garfinkel did find traces of destruction, the first time by the Egyptians around 1550 BCE and then twice more, until Lachish succumbed for good around 1150 BCE. “The Bible says that the city was destroyed by the people of Israel, Garfinkel told the Post. “But it doesn’t talk specifically about a palace, a temple or what was in the city.”

Nor does it give specific dates, he added. “We know that the destruction of Canaanite tribes was a long process which took about a hundred years. In the site we found traces of destruction at two levels, one dating back to the end of the 13th century BCE and another one to the middle of the 12th century. There are therefore about 50 years between the two events. Which of the two destructions is the one that was carried out by Joshua remains a big question,” Garfinkel said.