Mark Zuckerberg: How to change the world in 10 years 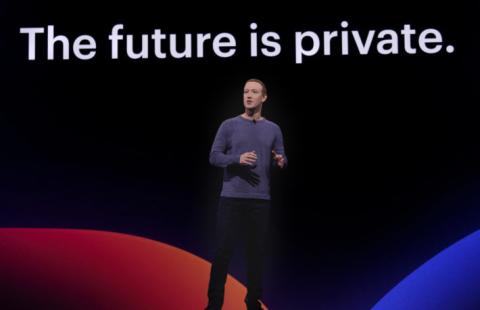 Every new year of the last decade I set a personal challenge. My goal was to grow in new ways outside my day-to-day work running Facebook. These led me to learn Mandarin, code an AI assistant for my home, read more books, run a lot more, learn to hunt and cook, and get more comfortable with public speaking.

When I started these challenges, my life was almost all about building the Facebook website. (It was mostly a website at the time.) Now there's so much more to learn from. At Facebook, we're building lots of different apps and technology -- ranging from a new private social platform to augmented and virtual reality -- and we're handling a lot more social responsibility. And outside Facebook, I'm a father now and I love spending time with my family, working on our philanthropy, and improving at the sports and hobbies I've picked up over the years. So while I'm glad I did annual challenges over the last decade, it's time to do something different.

This decade I'm going to take a longer term focus. Rather than having year-to-year challenges, I've tried to think about what I hope the world and my life will look in 2030 so I can make sure I'm focusing on those things. By then, if things go well, my daughter Max will be in high school, we'll have the technology to feel truly present with another person no matter where they are, and scientific research will have helped cure and prevent enough diseases to extend our average life expectancy by another 2.5 years. Here are some of the things that I think will be important in the next decade:

When I started Facebook, one of the reasons I cared about giving people a voice was that I thought it would empower my generation -- which I felt had important things to say and weren't being listened to enough. It turned out it wasn't just my generation that felt marginalized and needed more voice though, and these tools have given power to lots of different groups across society. I'm glad more people have voice, but it hasn't yet brought about the generational change in addressing important issues I had hoped for. I think that will happen this decade.

Today, many important institutions in our society still aren't doing enough to address the issues younger generations face -- from climate change to runaway costs of education, housing and healthcare. But as millennials and more members of younger generations can vote, I expect this to start changing rapidly. By the end of this decade, I expect more institutions will be run by millennials and more policies will be set to address these problems with longer term outlooks.

In many ways, Facebook is a millennial company with the issues of this generation in mind. At the Chan Zuckerberg Initiative, our focus is on very long term efforts that will primarily help our children's generation, like investing in curing, preventing and managing all diseases in our children's lifetimes, or making primary education more personalized to students needs. Over the next decade, we'll focus more on funding and giving a platform to younger entrepreneurs, scientists, and leaders to enable these changes.

The internet gave us the superpower of being able to connect with anyone, anywhere. This is incredibly empowering and means that our relationships and opportunities are no longer confined to just where we live. We're now part of a community with billions of people in it -- with all the dynamism, culture and economic opportunity that brings.

But being part of such a large community creates its own challenges and makes us crave intimacy. When I grew up in a small town, it was easy to have a niche and sense of purpose. But with billions of people, it's harder to find your unique role. For the next decade, some of the most important social infrastructure will help us reconstruct all kinds of smaller communities to give us that sense of intimacy again.

This is one of the areas of innovation I'm most excited about. Our digital social environments will feel very different over the next 5+ years, re-emphasizing private interactions and helping us build the smaller communities we all need in our lives.

In the last decade, the fastest growth in the economy has been in the tech industry. In the next decade, I expect technology will continue to create opportunity, but more through enabling all of the other parts of the economy to make better use of technology and grow even faster.

The area we're most focused on is helping small businesses. Across our services, more than 140 million small businesses already reach customers -- mostly for free. Today this takes the form of an entrepreneur setting up an account on Facebook, Instagram, or WhatsApp, and then either communicating with people for free or buying ads to get their message out more broadly. Over the next decade, we hope to build the commerce and payments tools so that every small business has easy access to the same technology that previously only big companies have had.

If we can make it so anyone can sell products through a storefront on Instagram, message and support their customers through Messenger, or send money home to another country instantly and at low cost through WhatsApp -- that will go a long way towards creating more opportunity around the world. At the end of the day, a strong and stable economy comes from people succeeding broadly, and the best way to do that is to make it so small businesses can effectively become technology companies.

The Next Computing Platform

The technology platform of the 2010s was the mobile phone. The platform of the 2000s before that was about the web, and the 1990s was the desktop computer. Each computing platform becomes more ubiquitously accessible and natural for us to interact with. While I expect phones to still be our primary devices through most of this decade, at some point in the 2020s, we will get breakthrough augmented reality glasses that will redefine our relationship with technology.

Augmented and virtual reality are about delivering a sense of presence -- the feeling that you're right there with another person or in another place. Instead of having devices that take us away from the people around us, the next platform will help us be more present with each other and will help the technology get out of the way. Even though some of the early devices seem clunky, I think these will be the most human and social technology platforms anyone has built yet.

The ability to be "present" anywhere will also help us address some of the biggest social issues of our day -- like ballooning housing costs and inequality of opportunity by geography. Today, many people feel like they have to move to cities because that's where the jobs are. But there isn't enough housing in many cities, so housing costs are skyrocketing while quality of living is decreasing. Imagine if you could live anywhere you chose and access any job anywhere else. If we deliver on what we're building, this should be much closer to reality by 2030.

One of the big questions for the next decade is: how should we govern the large new digital communities that the internet has enabled? Platforms like Facebook have to make tradeoffs on social values we all hold dear -- like between free expression and safety, or between privacy and law enforcement, or between creating open systems and locking down data and access. It's rare that there's ever a clear "right" answer, and in many cases it's as important that the decisions are made in a way that feels legitimate to the community. From this perspective, I don't think private companies should be making so many important decisions that touch on fundamental democratic values.

One way to address this is through regulation. As long as our governments are seen as legitimate, rules established through a democratic process could add more legitimacy and trust than rules defined by companies alone. There are a number of areas where I believe governments establishing clearer rules would be helpful, including around elections, harmful content, privacy, and data portability. I've called for new regulation in these areas and over the next decade I hope we get clearer rules for the internet.

Another and perhaps even better way to address this is by establishing new ways for communities to govern themselves. An example of independent governance is the Oversight Board we're creating. Soon you'll be able to appeal content decisions you disagree with to an independent board that will have the final decision in whether something is allowed. This decade, I hope to use my position to establish more community governance and more institutions like this. If this is successful, it could be a model for other online communities in the future.

We've got a lot to do this decade and there's a lot to learn to help make this all happen. I hope your new year and new decade are off to a good start. Here's to a great 2020s.