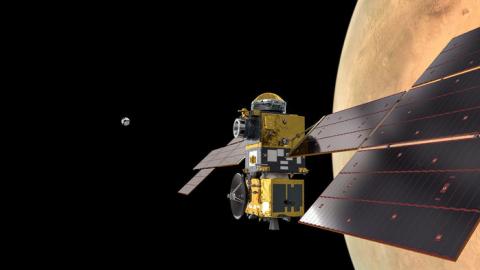 In just over a decade, a small capsule shaped like a flying saucer will blaze in from space and smash into an empty Utah desert. Inside the capsule, protected by shock absorbers, will be a precious payload: about half a kilogram of rocks gathered on Mars. After years as a dream, Mars sample return (MSR) is now a $7 billion plan, devised jointly by NASA and the European Space Agency (ESA).

Involving three heavy rocket launches from Earth, two rovers, the first ever rocket launch from another planet, and a daring rendezvous between the sample container and a spacecraft that would ferry it back to Earth, "It's as complicated as sending humans to the Moon," says Brian Muirhead, lead MSR planner at NASA's Jet Propulsion Laboratory in Pasadena, California.

If successful, MSR would fulfill what a 2011 report from the National Academies of Sciences, Engineering, and Medicine said was NASA's top priority in the study of the Solar System. Rovers like Curiosity, the car-size robot now exploring Mars, are increasingly capable, but their mobile labs are no match for tools available on Earth. Like the Apollo Moon rocks, Mars samples would be valuable across generations. Studies could reveal how a warm and wet Mars became cold and dry. Scientists could also get lucky and find evidence of life. "This has got to be one of the greatest missions of space exploration," says space scientist Andrew Coates of University College London.

Approval for ESA's initial contribution is expected next week, when ministers from ESA's 22 member nations gather in Seville, Spain, to approve the agency's budget for the next 3 years. David Parker, ESA's director of human and robotic exploration in Noordwijk, the Netherlands, says the total ESA contribution will be roughly €1.5 billion over 10 years, "which should be affordable to member states." At the ministerial meeting, he will ask for just under €600 million to pay for the first few years of MSR as well as the final elements of a separate project, the ExoMars rover due for launch next year. Parker is confident he'll get it. "This is the ministerial where Europe will step up and commit to this next phase of exploration," he says.

For its part, NASA will finalize its portion of the MSR architecture by January 2020, and the agency is hoping an MSR mission line will appear soon after in the Trump administration's 2021 budget request to Congress. Michael Meyer, NASA's Mars exploration scientist in Washington, D.C., says it's the right moment for the mission, which can take advantage of a cadre of engineers and scientists with rover experience and a set of still-healthy Mars orbiters that could provide communication relays. "Everything is kind of lined up right now," Meyer says.

The first stage of MSR is nearly complete and mostly paid for: NASA's $2.5 billion Mars 2020 rover. Due to launch in July 2020, the rover will land in Jezero crater near a fossilized river delta nearly 4 billion years old. The rover will range widely, performing science experiments and occasionally drilling small cores of mudstones and other rocks that could hold signs of ancient life. Each sample, containing up to 20 grams of rock and grit, will be stored in a tube about the size of a penlight. NASA is likely to cache some tubes on the ground and keep others on the rover.

MSR's next leg would come in 2028 when another NASA lander arrives carrying both a return rocket and an ESA-built "fetch" rover. After launch in 2026, the lander would take a slow, elongated route to Mars, allowing it to deliver a hefty 2100-kilogram payload—more than the Curiosity and Mars 2020 rovers combined. It would touch down in August 2028, after Mars's dust storm season, most likely using retrorockets guided by a new technology called terrain relative navigation. While descending, the lander will use a belly-mounted camera to take stock of the terrain and avoid hazards, putting it within 10 kilometers of the cached samples.

The fetch rover, about the size of a coffee table, will trundle out of the lander to seek the sample tubes deposited years earlier. The rover will rely on solar power, which gives it roughly 6 months to get its work done before it succumbs to the waning winter sun. To meet that tight schedule, it will travel up to 200 meters per day, navigating autonomously. "It's the only way to achieve the distances we need," says Sanjay Vijendran, ESA's campaign lead for MSR in Noordwijk.

Once the fetch rover returns to the lander, an ESA-built robotic arm will remove the sample tubes from racks on the rover and place up to 30 of them, containing just over half a kilogram of martian rock and soil, in a sphere the size of a basketball. (If Mars 2020 is still operating and carrying tubes, the arm can offload them, too.) The 2020 rover has 43 sample tubes, but some will remain on Mars so the rocket can remain a reasonable size, Muirhead says. Scientists seem to be able to live with the constraint, he says. "The general consensus was, ‘Bring us back 30 good tubes and we'll be happy.’"

Getting the sample sphere off the planet won't be easy, says Angie Jackman, an engineer who is leading the return rocket's development at NASA's Marshall Space Flight Center in Huntsville, Alabama. "This will be the first rocket off another planet," she says. NASA knew the rocket would have to be short and stubby to fit in the lander's protective entry shell. It also needed to survive for months in the cold. For years the agency pursued a hybrid rocket fueled by paraffin wax and a liquid oxidizer. But the selection of Jezero, which has a mild climate for Mars, meant a conventional solid rocket less than 3 meters tall could do the job without fear of its fuel cracking or exploding.

The sample sphere will be fired into an orbit higher than 300 kilometers to meet ESA's Earth return orbiter, which is supposed to follow the lander to Mars. With no martian version of GPS to guide it, ESA's orbiter will use cameras to track and capture the sphere. "The way we've set the geometry, we have a very good chance of seeing it within the first few hours," Muirhead says.

After the rendezvous, NASA-built robotic mechanisms will shunt the sphere into a containment module, seal it, and sterilize it. Like a Russian nesting doll, the module will be placed within a third protective shell, and then finally a fourth vessel: a disk-shaped vehicle to withstand a fiery, parachuteless re-entry through Earth's atmosphere.

To minimize the amount of fuel needed to send the craft back to Earth, ESA will mostly rely on ion thrusters, which use electricity from solar panels to drive a stream of ions out of the spacecraft, producing a gentle impulse that can be sustained for months. The approach—which ESA's BepiColombo probe is using to get to Mercury—generates so little thrust that each leg of the journey will take 2 years instead of the usual 9 months or so. "It's a disadvantage but it means we can do this within Europe's launch capability," Vijendran says.

Once the samples arrive on Earth in 2031, they'll be handled with care: They will be quarantined in a facility meant to protect the rocks from exposure to microbes on Earth—and earthly life from any martian pathogens. Developing instruments that won't contaminate the samples will be a challenge, but a manageable one, Meyer says.

Exactly how scientists will study the samples more than a decade from now is hard to predict. But they will surely want to check for signs of past or present life. Last year, the Curiosity rover identified two sites flush with complex organic macromolecules that resemble the goopy building blocks of oil on Earth. But its instruments cannot tease out whether life or geology produced these molecules. With just a few grams of material, however, scientists on Earth will be able to analyze carbon isotopes in similar materials from Jezero crater to determine whether life created them, says Maria-Paz Zorzano of the Center for Astrobiology in Madrid, who helped define MSR science priorities and sample selection for an international panel.

And if Jezero's clays show no signs of past life, scientists will want to know why. "Was it because it wasn't habitable, or because life couldn't get started?" asks Benjamin Weiss, a planetary scientist at the Massachusetts Institute of Technology in Cambridge. Scientists believe Mars lost its magnetic field billions of years ago as its core cooled, allowing its atmosphere to escape and leaving its surface cold, dry, and exposed to radiation from space. By dating different samples and measuring their fossil magnetism and the conditions in which they formed, scientists can test whether this theory is true—and, if so, whether the martian environment grew inhospitable so early that life could never get started.

With momentum building for much more Mars exploration—including human visitors—chances are waning to study the planet while it is pristine, Zorzano says. "I hope we don't miss the chance to catch this train," she says. "If we don't step in now, we will miss this unique moment."