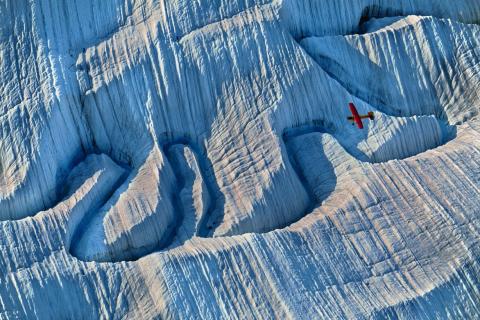 Politicians, economists and even some natural scientists have tended to assume that tipping points (1) in the Earth system — such as the loss of the Amazon rainforest or the West Antarctic ice sheet — are of low probability and little understood. Yet evidence is mounting that these events could be more likely than was thought, have high impacts and are interconnected across different biophysical systems, potentially committing the world to long-term irreversible changes.

Here we summarize evidence on the threat of exceeding tipping points, identify knowledge gaps and suggest how these should be plugged. We explore the effects of such large-scale changes, how quickly they might unfold and whether we still have any control over them.

In our view, the consideration of tipping points helps to define that we are in a climate emergency and strengthens this year’s chorus of calls for urgent climate action — from schoolchildren to scientists, cities and countries.

The Intergovernmental Panel on Climate Change (IPCC) introduced the idea of tipping points two decades ago. At that time, these ‘large-scale discontinuities’ in the climate system were considered likely only if global warming exceeded 5 °C above pre-industrial levels. Information summarized in the two most recent IPCC Special Reports (published in 2018 and in September this year) (2,3) suggests that tipping points could be exceeded even between 1 and 2 °C of warming (see ‘Too close for comfort’).

If current national pledges to reduce greenhouse-gas emissions are implemented — and that’s a big ‘if’ — they are likely to result in at least 3 °C of global warming. This is despite the goal of the 2015 Paris agreement to limit warming to well below 2 °C. Some economists, assuming that climate tipping points are of very low probability (even if they would be catastrophic), have suggested that 3 °C warming is optimal from a cost–benefit perspective. However, if tipping points are looking more likely, then the ‘optimal policy’ recommendation of simple cost–benefit climate-economy models (4) aligns with those of the recent IPCC report (2). In other words, warming must be limited to 1.5 °C. This requires an emergency response.

We think that several cryosphere tipping points are dangerously close, but mitigating greenhouse-gas emissions could still slow down the inevitable accumulation of impacts and help us to adapt.

Research in the past decade has shown that the Amundsen Sea embayment of West Antarctica might have passed a tipping point3: the ‘grounding line’ where ice, ocean and bedrock meet is retreating irreversibly. A model study shows (5) that when this sector collapses, it could destabilize the rest of the West Antarctic ice sheet like toppling dominoes — leading to about 3 metres of sea-level rise on a timescale of centuries to millennia. Palaeo-evidence shows that such widespread collapse of the West Antarctic ice sheet has occurred repeatedly in the past.

The latest data show that part of the East Antarctic ice sheet — the Wilkes Basin — might be similarly unstable (3). Modelling work suggests that it could add another 3–4 m to sea level on timescales beyond a century.

The Greenland ice sheet is melting at an accelerating rate (3). It could add a further 7 m to sea level over thousands of years if it passes a particular threshold. Beyond that, as the elevation of the ice sheet lowers, it melts further, exposing the surface to ever-warmer air. Models suggest that the Greenland ice sheet could be doomed at 1.5 °C of warming3, which could happen as soon as 2030.

Thus, we might already have committed future generations to living with sea-level rises of around 10 m over thousands of years (3). But that timescale is still under our control. The rate of melting depends on the magnitude of warming above the tipping point. At 1.5 °C, it could take 10,000 years to unfold3; above 2 °C it could take less than 1,000 years6. Researchers need more observational data to establish whether ice sheets are reaching a tipping point, and require better models constrained by past and present data to resolve how soon and how fast the ice sheets could collapse.

Whatever those data show, action must be taken to slow sea-level rise. This will aid adaptation, including the eventual resettling of large, low-lying population centres.

A further key impetus to limit warming to 1.5 °C is that other tipping points could be triggered at low levels of global warming. The latest IPCC models projected a cluster of abrupt shifts7 between 1.5 °C and 2 °C, several of which involve sea ice. This ice is already shrinking rapidly in the Arctic, indicating that, at 2 °C of warming, the region has a 10–35% chance (3) of becoming largely ice-free in summer.

Climate change and other human activities risk triggering biosphere tipping points across a range of ecosystems and scales (see ‘Raising the alarm’).  Ocean heatwaves have led to mass coral bleaching and to the loss of half of the shallow-water corals on Australia’s Great Barrier Reef. A staggering 99% of tropical corals are projected (2) to be lost if global average temperature rises by 2 °C, owing to interactions between warming, ocean acidification and pollution. This would represent a profound loss of marine biodiversity and human livelihoods.

As well as undermining our life-support system, biosphere tipping points can trigger abrupt carbon release back to the atmosphere. This can amplify climate change and reduce remaining emission budgets.

With the Arctic warming at least twice as quickly as the global average, the boreal forest in the subarctic is increasingly vulnerable. Already, warming has triggered large-scale insect disturbances and an increase in fires that have led to dieback of North American boreal forests, potentially turning some regions from a carbon sink to a carbon source (9). Permafrost across the Arctic is beginning to irreversibly thaw and release carbon dioxide and methane — a greenhouse gas that is around 30 times more potent than CO2 over a 100-year period.

Researchers need to improve their understanding of these observed changes in major ecosystems, as well as where future tipping points might lie. Existing carbon stores and potential releases of CO2 and methane need better quantification.

The world’s remaining emissions budget for a 50:50 chance of staying within 1.5 °C of warming is only about 500 gigatonnes (Gt) of CO2. Permafrost emissions could take an estimated 20% (100 Gt CO2) off this budget (10), and that’s without including methane from deep permafrost or undersea hydrates. If forests are close to tipping points, Amazon dieback could release another 90 Gt CO2 and boreal forests a further 110 Gt CO2 (11). With global total CO2 emissions still at more than 40 Gt per year, the remaining budget could be all but erased already.

In our view, the clearest emergency would be if we were approaching a global cascade of tipping points that led to a new, less habitable, ‘hothouse’ climate state11. Interactions could happen through ocean and atmospheric circulation or through feedbacks that increase greenhouse-gas levels and global temperature. Alternatively, strong cloud feedbacks could cause a global tipping point (12,13).

We argue that cascading effects might be common. Research last year14 analysed 30 types of regime shift spanning physical climate and ecological systems, from collapse of the West Antarctic ice sheet to a switch from rainforest to savanna. This indicated that exceeding tipping points in one system can increase the risk of crossing them in others. Such links were found for 45% of possible interactions (14).

In our view, examples are starting to be observed. For example, Arctic sea-ice loss is amplifying regional warming, and Arctic warming and Greenland melting are driving an influx of fresh water into the North Atlantic. This could have contributed to a 15% slowdown (15) since the mid-twentieth century of the Atlantic Meridional Overturning Circulation (AMOC), a key part of global heat and salt transport by the ocean (3). Rapid melting of the Greenland ice sheet and further slowdown of the AMOC could destabilize the West African monsoon, triggering drought in Africa’s Sahel region. A slowdown in the AMOC could also dry the Amazon, disrupt the East Asian monsoon and cause heat to build up in the Southern Ocean, which could accelerate Antarctic ice loss.

The palaeo-record shows global tipping, such as the entry into ice-age cycles 2.6 million years ago and their switch in amplitude and frequency around one million years ago, which models are only just capable of simulating. Regional tipping occurred repeatedly within and at the end of the last ice age, between 80,000 and 10,000 years ago (the Dansgaard–Oeschger and Heinrich events). Although this is not directly applicable to the present interglacial period, it highlights that the Earth system has been unstable across multiple timescales before, under relatively weak forcing caused by changes in Earth’s orbit. Now we are strongly forcing the system, with atmospheric CO2 concentration and global temperature increasing at rates that are an order of magnitude higher than those during the most recent deglaciation.

Atmospheric CO2 is already at levels last seen around four million years ago, in the Pliocene epoch. It is rapidly heading towards levels last seen some 50 million years ago — in the Eocene — when temperatures were up to 14 °C higher than they were in pre-industrial times. It is challenging for climate models to simulate such past ‘hothouse’ Earth states. One possible explanation is that the models have been missing a key tipping point: a cloud-resolving model published this year suggests that the abrupt break-up of stratocumulus cloud above about 1,200 parts per million of CO2 could have resulted in roughly 8 °C of global warming (12).

Some early results from the latest climate models — run for the IPCC’s sixth assessment report, due in 2021 — indicate a much larger climate sensitivity (defined as the temperature response to doubling of atmospheric CO2) than in previous models. Many more results are pending and further investigation is required, but to us, these preliminary results hint that a global tipping point is possible.

To address these issues, we need models that capture a richer suite of couplings and feedbacks in the Earth system, and we need more data — present and past — and better ways to use them. Improving the ability of models to capture known past abrupt climate changes and ‘hothouse’ climate states should increase confidence in their ability to forecast these.

Some scientists counter that the possibility of global tipping remains highly speculative. It is our position that, given its huge impact and irreversible nature, any serious risk assessment must consider the evidence, however limited our understanding might still be. To err on the side of danger is not a responsible option.

If damaging tipping cascades can occur and a global tipping point cannot be ruled out, then this is an existential threat to civilization. No amount of economic cost–benefit analysis is going to help us. We need to change our approach to the climate problem.

In our view, the evidence from tipping points alone suggests that we are in a state of planetary emergency: both the risk and urgency of the situation are acute (see ‘Emergency: do the maths’).

We argue that the intervention time left to prevent tipping could already have shrunk towards zero, whereas the reaction time to achieve net zero emissions is 30 years at best. Hence we might already have lost control of whether tipping happens. A saving grace is that the rate at which damage accumulates from tipping — and hence the risk posed — could still be under our control to some extent.

The stability and resilience of our planet is in peril. International action — not just words — must reflect this.

3. IPCC. IPCC Special Report on the Ocean and Cryosphere in a Changing Climate (IPCC, 2019).