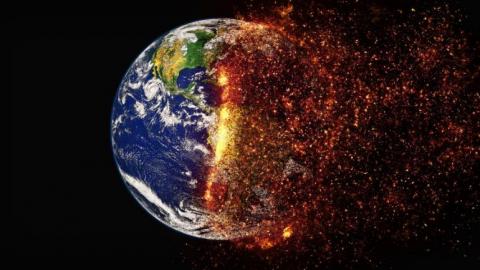 The world may already have crossed a series of climate tipping points, according to a stark warning from scientists. This risk is “an existential threat to civilisation”, they say, meaning “we are in a state of planetary emergency”.

Tipping points are reached when particular impacts of global heating become unstoppable, such as the runaway loss of ice sheets or forests. In the past, extreme heating of 5C was thought necessary to pass tipping points, but the latest evidence suggests this could happen between 1C and 2C.

The planet has already heated by 1C and the temperature is certain to rise further, due to past emissions and because greenhouse gas levels are still rising. The scientists further warn that one tipping point, such as the release of methane from thawing permafrost, may fuel others, leading to a cascade.

The researchers, writing in a commentary article in the journal Nature, acknowledge that the complex science of tipping points means great uncertainty remains. But they say the potential damage from the tipping points is so big and the time to act so short, that “to err on the side of danger is not a responsible option”. They call for urgent international action. “A saving grace is that the rate at which damage accumulates from tipping could still be under our control to some extent,” they write. “The stability and resilience of our planet is in peril. International action – not just words – must reflect this.”

Prof Tim Lenton at the University of Exeter, the lead author of the article, said: “We might already have crossed the threshold for a cascade of interrelated tipping points. The simple version is the schoolkids [striking for climate action] are right: we are seeing potentially irreversible changes in the climate system under way, or very close.” “As a scientist, I just want to tell it how it is,” he said. “It is not trying to be alarmist, but trying to treat the whole climate change problem as a risk management problem. It is what I consider the common sense way.”

Phil Williamson at the University of East Anglia, who did not contribute to the article, said: “The prognosis by Tim Lenton and colleagues is, unfortunately, fully plausible: that we might have already lost control of the Earth’s climate.”

The new article comes as the UN warns action is very far from stopping global temperature rise, with the world currently on track for 3C-4C. The commentary lists nine tipping points that may have been activated. “We have this alarming evidence that part of the west Antarctic ice sheet may be in irreversible retreat,” said Lenton. “All the signals are that it is.” A similar situation appears to be occurring at the Wilkes basin in east Antarctica. The collapse of these ice sheets would eventually raise sea level by many metres.

The massive Greenland ice sheet was melting at an accelerating rate, the scientists said, while Arctic sea ice is shrinking fast. “Permafrost across the Arctic is beginning to irreversibly thaw and release carbon dioxide and methane,” they said.

The Gulf Stream current in the Atlantic, which warms Europe, has also slowed by 15% since the mid-20th century. “That is just about in the range of natural variability, but it is also hard to rule out that it is part of a longer downturn,” Lenton said.

The scientists report that 17% of the Amazon rainforest has been lost since 1970. The tipping point, where loss of forest leads to it drying out, could lie in the range 20%-40%, they said. In temperate forests, especially in North America, heating has triggered more fires and pest outbreaks, potentially turning some regions from a sink for carbon to a source. In the tropics, corals are predicted to be wiped out by 2C of heating.

A cascade of tipping points could occur because, for example, the melting of Arctic sea ice amplifies heating by exposing dark ocean that absorbs more sunlight. That may increase the melting of Greenland ice and permafrost areas. “Multiple risks can interact, with one change reinforcing another, and with warming of just a degree or two sufficient to result in dramatic cascading effects,” said Williamson.

Prof Martin Siegert, at Imperial College London, said: “The new work is valuable. They are being a little speculative, but maybe you need to be.” He pointed out that the extremely rapid rate at which CO2 was being pumped into the atmosphere was unlikely to have ever occurred on Earth before. “It may mean that tipping points can occur in unexpected ways as there is no geological precedent for this rate of CO2 change.”

The article reports that preliminary results from the latest climate models suggest global heating will be greater than expected, increasing the risk of tipping points. Prof Piers Forster, at the University of Leeds, disagreed on that point. However, he added: “I completely endorse their call for action. Although possibly low probability, the risks they identify are real.”

Lenton said action would still have real benefits, by slowing the impacts and giving more time for people to adapt. He said: “This article is not meant to be a counsel of despair. If we want to avoid the worst of these bad climate tipping points, we need to activate some positive social and economic tipping points [such as renewable energy] towards what should ultimately be a happier, flourishing, sustainable future for the generations to come.”