British Jews at the center of the political struggle 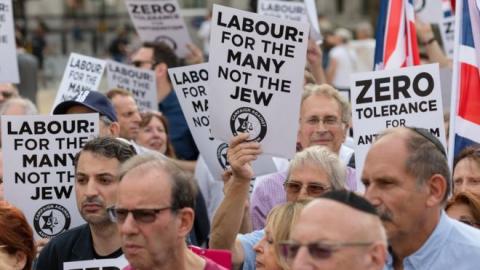 Britain’s relatively small Jewish community won’t have much of an impact on the general election next month. At most there are perhaps half a dozen seats in north London and Manchester where the number of Jewish voters could prove decisive. To win these seats (if the latest polls are to be trusted), the Labour Party led by Jeremy Corbyn will struggle because only 6 percent of British Jews plan to vote Labour, according to polling company Survation.

But the Jewish question — or, more specifically, the issue of anti-Semitism associated with Corbyn’s Labour — could have a much wider implication for the election. A key element in the campaign strategy of Prime Minister Boris Johnson’s Conservative Party is to encourage a split among voters who support remaining in the European Union and who voted overwhelmingly for Labour in the last election in 2017.

The Conservatives, who are trying to monopolize the “leave” vote, know there is no chance that these “remainers” will come over to them. But a mass defection from Labour — which under Corbyn has been incoherent over the future of Brexit — to the strenuously pro-remain Liberal Democrats could push Labour down to second place in many constituencies and help the Conservatives win enough seats to gain a majority in the new parliament.

For many pro-remain voters, Corbyn’s history of left-wing euroskepticism and his insistence on running the campaign on issues other than Brexit will be enough to make them vote Lib Dem. Some may need just a bit of an extra push.

Focus groups have shown that the relentless series of revelations on Corbyn’s questionable associations with anti-Semites and Holocaust deniers, his history of controversial statements on Israel and the surge in the number of Corbynist party members making anti-Semitic comments on social media has registered with the broader public. It may not be the key issue for many non-Jewish voters, but together with Brexit and other question marks over Corbyn’s suitability to serve as premier (his personal ratings are the lowest for an opposition leader in polling history), this could be enough to nudge many wavering voters away from Labour and into the Lib Dems’ arms.

Corbyn’s rivals are already using the anti-Semitism talking point against him. The slavishly pro-Tory Sunday Telegraph ran an interview with Conservative Party Chairman James Cleverly on its latest cover, claiming that Jewish families will leave Britain if Corbyn is elected. The report was notable for not quoting any Jews. And it failed the basic test of news because it simply wasn’t. A raft of polls in recent years have said that a significant chunk of British Jews would consider emigrating should a Corbyn government come to power. The recent Opinium poll put this number as high as 47 percent.

Cleverly wasn’t alone. On Monday, it was senior Conservative Minister Michael Gove who embarked on a long series of tweets demanding that prominent Labour activists condemn Corbyn for calling “anti-Semitic killers Hamas and Hezbollah” his friends in a speech back in 2009.

And it’s not just the Conservatives. At an event launching the Liberal Democrats’ campaign on Tuesday, party leader Jo Swinson said a main reason she won’t join a Corbyn government if no party wins a majority in the next parliament is his “complete and utter failure to root out anti-Semitism in his own party … a total dereliction of duty when it comes to protecting that value of equality.”

There is a cruel dilemma for British Jews in this election. Naturally, the overwhelming majority — 87 percent of British Jews believe Corbyn is an anti-Semite according to the Survation poll and only 8 percent think he isn’t — want the country’s most prominent figures to call out what has been happening in Labour. But when it is his political rivals doing the calling out during an election campaign, it leaves many Jews with a feeling of unease. Are they being treated as British citizens with equal rights and standing, or as convenient political footballs?

British Jews are torn between their right to have their own political views and voting preferences, and the need to stand up for their identities as Jews and in solidarity with their community. Sixty-four percent of them intend to vote Conservative. Many would have voted for the party anyway, but since two-thirds of British Jews are believed to have voted in the 2016 Brexit referendum to remain in the European Union, it seems that for many of them the vote for the now staunchly pro-leave Conservatives is principally due to their hope that Johnson can block Corbyn’s path to Downing Street.

But many Jews are incapable of voting Conservative, especially when the party is going through one of its most right-wing and nativist evolutions. While there isn’t reliable data on Jewish voting patterns going back decades, it is pretty safe to say that the 24 percent of British Jews planning to vote Lib Dem next month is the highest proportion in a century — since the days when the Zionist David Lloyd-George led the Liberal Party.

Even the small number of Jews who still intend to vote Labour are split three ways. There are those who have held on, despite the abuse at party branch meetings and online, in the hope that it’s still possible to “fight from within” and that Corbyn will eventually be ditched by the party.

Even Jewish Corbyn supporters are split and bitterly at war with each other. Some, like Jon Lansman, the founder of Momentum (the Corbynist party within a party), acknowledge that Labour has anti-Semitism issues and, while continuing to support Corbyn, have called for the more egregious Judeophobes like former London Mayor Ken Livingstone and MP Chris Williamson to be expelled from the party. And then there’s the tiny group of Jews who tokenize their identity to give cover to just about every anti-Semite on the left.

There has a been a lot of debate in the Jewish community about what kind of threat to Jewish life a Corbyn government would pose. Some of it has verged on the hysterical, with words like “existential.” But one thing is now certain: The election has forced British Jews to the forefront of a toxic political struggle they never wanted, and certainly don’t deserve.