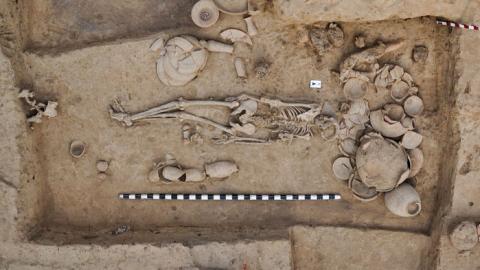 The civilization’s abrupt downfall remains one of the great mysteries of the ancient world. Now, for the first time, scientists have analyzed the genome of an ancient Harappan. The findings reveal little about why the society collapsed, but they illuminate both its past and its continuing genetic legacy in modern Indians.

“The Indus Valley Civilization has been an enigma for a long time,” says Priya Moorjani, a population geneticist at the University of California, Berkeley, who wasn’t involved with the study. “So it’s very exciting to … learn about [its] ancestry and history.”

The Indus Valley Civilization emerged sometime around 3000 B.C.E. and had collapsed by about 1700 B.C.E. During its height, it stretched across much of what is today northwestern India and parts of eastern Pakistan. It is alternatively known as the Harappan civilization, after the first of its sites to be excavated in Punjab province in Pakistan beginning in the 1820s. Along with ancient Egypt and Mesopotamia, it was among the world’s first large-scale urban agricultural societies, boasting somewhere between 1 million and 5 million inhabitants across five central cities.

Although hundreds of skeletons from the Indus Valley have been uncovered, the region’s hot climate rapidly destroys the genetic material that has been instrumental in tracing the history of other early civilizations.

In recent years, however, scientists have learned that the petrous bone of the inner ear contains an unusually high quantity of DNA, allowing them to locate usable genetic material even in otherwise degraded skeletons. A team led by geneticist David Reich at Harvard University and archaeologist Vasant Shinde at Deccan College in Pune, India, decided to try the promising technique with Indus specimens. They sampled more than 60 skeletal pieces, including numerous petrous bones, before they were able to extract ancient DNA from one. Then they had to sequence the sample more than 100 times to piece together a relatively complete genome.

“There’s no doubt this is the most intensive effort we’ve ever made to get ancient DNA from a single sample,” Reich says.

The sampled individual, most likely a woman based on her DNA, was buried among dozens of ceramic bowls and vases in an Indus site known as Rakhigarhi, about 150 kilometers northwest of modern-day Delhi. Archaeological evidence suggests she lived sometime between 2800 and 2300 B.C.E. Her genome closely matched DNA from 11 other individuals who had been found at sites in Iran and Turkmenistan, where conditions favor better DNA preservation. (Those individuals belong to a set of 523 ancient DNA sequences used to chart the population history of South Asians and published today in Science.)

Knowing that the Indus civilization traded with those regions, and that those 11 individuals had little in common genetically with others buried in their regions, Reich and colleagues concluded they were likely Harappan migrants.

Now working with a bank of Indus genomes presumed to be 12 individuals strong, the researchers compared their genetic signatures to DNA from other ancient civilizations in Eurasia as well as modern populations. A resulting Indus family tree revealed that although the civilization collapsed nearly 4000 years ago, its genetic stock forms the basis of most people living in India today, the team reports today in Cell.

The Science paper, also led by Reich, notes that modern people from North India also bear the genetic marks of ancient interbreeding with herders from the Eurasian steppe, a vast grassland that stretches across northern Asia, moving southward around 2000 B.C.E. Those steppe herders carried European DNA from previous interbreeding events, the authors note, explaining the once-perplexing genetic link between Europeans and South Asians. Over the next few thousand years, the groups in north and south India intermixed, leading to the modern population’s complex ancestral mix.

One surprise concerns DNA related to ancient Iranians, which was previously found to be prevalent in modern South Asians. The finding seemed to back a popular belief among anthropologists that migrants from the Fertile Crescent—which comprises modern-day Iran and gave rise to the world’s first farmers who began to rove about 10,000 years ago—moved east at some point and mixed with South Asian hunter-gatherers, introducing agriculture to the Indian subcontinent. Yet the new study suggests the Iranian-related DNA in both the Indus individuals and modern Indians actually predates the rise of agriculture in Iran by some 2000 years. In other words, that Iranian-related DNA came from interbreeding with 12,000-year-old hunter-gatherers, not more recent farmers, Reich explains.

“It seems likely there were independent advents of farming,” says biological anthropologist Gyaneshwer Chaubey at Banaras Hindu University in Varanasi, India, who wasn’t involved with the study. One explanation, he notes, might be that ancient South Asians learned farming practices from their neighbors without interbreeding with them.

Figuring out exactly what happened will require more archaeological work and more ancient DNA samples from across the region, Chaubey says. “The findings from the study are extremely exciting, but this is just the beginning of the story.”

Photo: Ancient DNA from the Indus Valley Civilization was found in this individual buried at India’s Rakhigarhi archaeological site.