The Battle of the Arctic 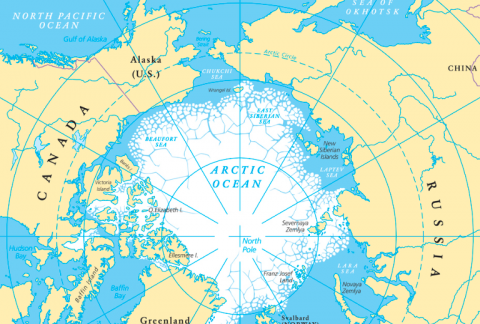 The two most important global issues of the coming decades are the return of rivalry between great powers and the intensification of climate change. Squarely at the intersection of these trends sits the Arctic, a region whose growing importance is reshaping the world’s geo-economics and geopolitics alike.

Publicly, the Trump administration is giving greater attention to the Arctic – an indication that the U.S. is mobilizing for the new era. Unfortunately, while Washington is speaking the language of great-power rivalry, its actions have yet to catch up with its words.

Since January, the Navy and Coast Guard have releasedseparate Arctic strategies. Secretary of the Navy Richard Spencer has called for new freedom of navigation operations and an increased naval presence in the region. At a May meeting of the Arctic Council, which consists of the eight nations bordering the ocean, Secretary of State Mike Pompeo warned that predatory powers were making inroads in the region. Calling out China’s actions in the western Pacific, he asked, "Do we want the Arctic Ocean to transform into a new South China Sea?" And last month, the Pentagon released its department-wide Arctic Strategy, rewritten to reflect changes in the world environment since the last was released in 2016.

There's no mystery why the Arctic is getting so much attention. Climate change is transforming the region, and thereby opening new shipping lanes and facilitating exploitation of undersea resources. The Northern Sea Route, which runs along Russia’s northern coast, slashesshipping times between East Asian and European ports compared to existing routes through the Strait of Malacca. And by some estimates, the Arctic contains 30 percent of the world's natural gas and over $1 trillion in strategically important rare-earth minerals.

At the same time, the Arctic is becoming a contested zone. Russia is enhancing its power-projection capabilities and asserting control over key sea routes. China, a self-proclaimed “near-Arctic” power, is starting to develop a military presence and linking its activities there to its globe-spanning Belt and Road Initiative. As the frictions between the major powers intensify around the world, they will increasingly spill over into the Arctic.

U.S. strategists are coming to understand that, in time of conflict, Russian (and eventually Chinese) forces could threaten the northern extremities of the American homeland in the Arctic. They might also use Arctic capabilities to interfere with the deployment of U.S. forces to Europe or the Asia-Pacific. Questions of sovereignty and freedom of navigation in the Arctic are becoming more pressing as maritime traffic increases and the economic stakes rise. Previously obscure waterways like the Bering Strait may become critical chokepoints – the Persian Gulfs of the future. All this, in addition to the disruptive effects that climate change will have on Arctic populations, ecology and wildlife.

The Pentagon's proposed response is relatively straightforward and sensible. Key strategy documents and speeches emphasize that the Navy, Marines and Coast Guard will conduct more exercises in the region. The U.S. may undertake freedom of navigation operations to challenge Russia and other countries that claim sovereignty over what the U.S. considers international waterways; the Marine Corps will prepare two expeditionary brigades to operate in Arctic conditions. There will be enhanced cooperation with allies to secure key passages, such as the so-called Greenland-Iceland-U.K. Gap, and counter challenges from U.S. rivals. Notably, the Pentagon’s Arctic strategy also goes heavy on affirmations of the rules-based international order - despite the White House's disdain for that term - in recognition that promoting common rules of the road is critical to avoiding a zero-sum scramble that would suit more ruthless actors quite well.

These are important steps in focusing U.S. attention on the Arctic and defending U.S. interests there. Yet several major challenges remain.

The first is the yawning gap between goals and resources. Russia has 14 icebreakers, has built six Arctic bases since 2013, and is bringing old air bases and infrastructure back into use. China's Arctic capabilities are far weaker but growing. U.S. capabilities, unfortunately, are seriously lacking.

The Coast Guard has one heavy and one medium icebreaker, even though these ships are indispensable to operating in the Arctic. Congress recently appropriated$655 million for a planned three new polar-security cutters, and the government awarded a contract for its first new heavy icebreaker in decades. All good, but hardly satisfactory: between the dearth of icebreakers, the lack of suitable infrastructure and facilities north of the Arctic circle, and other shortfalls, the U.S. is at a disadvantage that will require time - and money - to overcome.

Second, there is an unavoidable tension in U.S. strategy, because Washington is facing problematic behavior by rivals and allies alike. Yes, Russia is flexing its muscles in asserting jurisdiction over the Northern Sea Route. But Canada also claims the Northwest Passage as its territorial waters, contrary to the U.S. view of international law. Perhaps this can be managed, just as the U.S. has conducted freedom of navigation operations that challenge the claims of several countries - not just China - in the South China Sea. Yet it creates a certain awkwardness when the U.S. touts the need for stronger cooperation with allies while also publicly considering freedom of navigation operations that would surely aggravate the Canadians. Here the requirements of evenhandedness and the imperatives of coalition-management come into conflict.

Finally, there is the glaring incongruity of a strategy necessitated on part by the effects of climate change and the position of administration that refuses to acknowledge that man-made climate change is a problem. America’s Arctic allies look at the region not simply as an arena for rivalry, but as a manifestation of the havoc that climate change may wreak on the world. But official Washington — the executive branch, at least — has chosen largely to disengage from multilateral efforts to get a handle on the problem.

The potential environmental fallout from this position is troubling enough. The strategic consequences are equally problematic. The administration’s stance gives China, the world’s largest emitter of carbon dioxide equivalent gasses, an opportunity to position itself as a responsible power on climate change, and raises international doubts about how committed Washington really is to upholding a healthy, congenial environment in the Arctic and beyond. Trump once famously argued that climate change was a Chinese hoax meant to make the U.S. less competitive. In reality, ignoring climate change will ultimately put America at a strategic disadvantage.