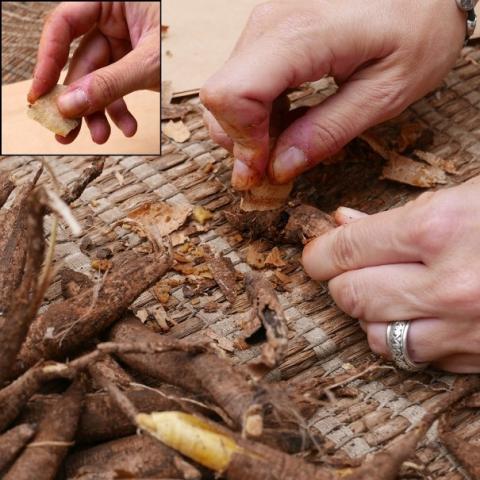 “Waste not, want not,” goes the age-old adage. So age-old, in fact, that even prehistoric humans adhered to it. These ancient humans, according to new Tel Aviv University research, “recycled” discarded or broken flint tools to create small, sharp utensils with specific functions some 400,000 years ago. These recycled tools were then used with great precision to perform tasks involved in the processing of animal and plant materials.

The recycled tool kit is just one find from the Qesem Cave near Tel Aviv, which has previously offered up other insights into prehistoric life in the region. Exceptional cave conditions allowed for the immaculate preservation of the materials.

While archaeologists have already known for some years that prehistoric people recycled daily life objects, the Israeli study recently published in the Journal of Human Evolutiondemonstrated for the first time the specific uses of the recycled toolkit at Qesem Cave. “Recycling was a way of life for these people,” says Prof. Ran Barkai of Tel Aviv University, who led the study with other researchers from TAU and from Sapienza University of Rome. “It has long been a part of human evolution and culture.”

TAU postdoctoral fellow Flavia Venditti explains what the tools were used for. “We used microscopic and chemical analyses to discover that these small and sharp recycled tools were specifically produced to process animal resources like meat, hide, fat and bones,” she explains. “We also found evidence of plant and tuber processing, which demonstrated that they were also part of the hominids’ diet and subsistence strategies.”

“Our data shows that lithic recycling at Qesem Cave was not occasional and not provoked by the scarcity of flint,” Venditti concludes. “On the contrary, it was a conscious behavior which allowed early humans to quickly obtain tiny sharp tools to be used in tasks where precision and accuracy were essential.”

The researchers plan to continue investigating prehistoric recycling by applying their analysis to other sites in Africa, Asia and Europe.