The Return of Anti-Semitism 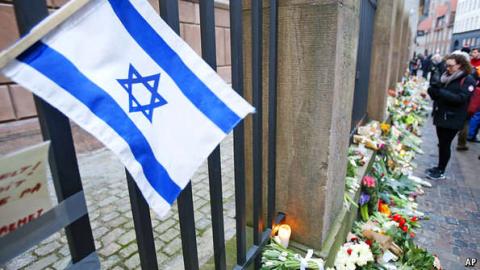 That was 17 years ago. In 2003, Gabriel Schoenfeld, then a COMMENTARY editor, published a book called The Return of Anti-Semitism. Over the past three years, since the massacre at the kosher supermarket in Paris and the rise of explicit anti-Semitic sentiments from white nationalists on social media, articles too numerous to count have noted a revival of anti-Semitism. And, on Sunday, Rabbi Lord Jonathan Sacks produced a series of tweets about “the shooting at the Chabad of Poway synagogue in San Diego and the continued return of Antisemitism.”

Whatever form it takes—and this past week alone, it has taken the form of a disgusting cartoon, a white nationalist shooting up a shul, the smiling face of the representative of a nuclear-ready regime that vows to destroy the state where Jews have ingathered for the first time in two millennia—we’ve seen it before, and we will see it again. Anti-Semitism has been returning for so long that it feels like it never left.

But of course it did leave—or rather, it was quieted in Western society for quite a while, for many decades, at least in its most obvious form. To be sure, it continued in the Soviet Union, which was an anti-Western regime, and it continued in Muslim countries, where it had and has many uses.

But after 1945, the societies of the West, stricken with horror at the way in which an advanced and civilized nation could deploy the tools of technology to fulfill the Satanic dream of working to rid the world of Jews on a mass scale, all but organized themselves on the principle that Jew-hatred was an unmitigated evil. They did so not only because of the way Jew-hatred threatened a small minority but also because history has had an ugly habit of showing that the ingestion of anti-Semitism and its explosive expression is a cancer that can destroy a nation from the inside.

Of course, you cannot destroy so entrenched a sentiment, with roots as multifarious as those of Jew-hatred. But you can insist on standards of conduct at workplaces, at institutions, in schools, and in public discourse that leaves it where it belongs—in the darker corners of the human heart and the darker ideas of the conspiracist’s brain. And that is what happened.

Discriminatory behavior against Jews, especially in America, became a thing of the past. White shoe law firms that wouldn’t interview a Jew soon became disproportionately populated with Jewish attorneys. Jews were prevented from attending the Ivy Leagues in great numbers until the early 1960s but, by the 1990s, most Ivy League colleges had Jewish presidents.

This unprecedented set of circumstances still obtains, especially in the United States, but it is fraying. Perhaps the fraying was inevitable. The pent-up energy of the Jewish people has, over the past eight decades, caused us to rise in a manner that has proved threatening. Mordant Jewish humor has always warned this would be a possibility, as in the joke about the two Jews facing a firing squad. One says, “I would like please a blindfold.” The other says, “Sam, don’t make trouble.” Keep your head down. Ask for nothing. No good will come of it.

In 2019, an editor at the international edition of the New York Times, an extraordinarily prestigious position, slotted and ran a cartoon in which the prime minister of Israel was drawn as a dog, malevolently leading a blind U.S. president. As Bret Stephens wrote in a horrified column about his own paper’s perfidy, “Here was an image that, in another age, might have been published in the pages of Der Stürmer. The Jew in the form of a dog. The small but wily Jew leading the dumb and trusting American. The hated Trump being Judaized with a skullcap. The nominal servant acting as the true master. The cartoon checked so many anti-Semitic boxes that the only thing missing was a dollar sign.”

This matters because it reveals just how frayed the anti-anti-Semitic standard has become. It likely did not occur to the editor, whose identity we do not know, that he was acting as the unwitting reincarnation of Julius Streicher. It is, rather, likely that this editor has not had a conversation in years with anyone who did not think Benjamin Netanyahu was a monster and therefore was fair game. The idea that exactly such imagery was part and parcel of the conscious effort to gas and incinerate the Jewish people was unknown to him. Indeed, the very idea that the Jewish people are only a few generations removed from near-destruction and that a certain degree of sensitivity is required in depicting them may not ever have occurred to him. Indeed, perhaps something close to the opposite is at work in his understanding of the world.

We know about the selective expectations involved in the unique criticism of Israel for behaving in ways that dozens of other countries behave when it comes to contested territories. The constant harping critics of the world’s only Jewish state say disingenuously that they are doing it for Israel’s own good or to hold Israel to the standards of its own prophets when they tend to hold no other state in the world to any standards.

But it’s not just Israel that matters here. In Europe, laws have been passed to make it difficult or impossible for Jews to engage in the religion’s oldest single practice—the circumcision of newborn boys—and to impede the right of Jews to keep kosher. Creating legal impediments to the daily practice of a minority’s faith tradition is not some newfangled social-media meme; it’s the oldest form of religious discrimination there is.

Yisroel Goldstein, the rabbi of Chabad of Poway, emerged from surgery on his wounded hands and issued a statement–a beautiful, defiant, eloquent, and life-affirming declaration at the end of Passover that while, as we say in the Haggadah, “in every generation they rise up to destroy us,” we will not be destroyed. He asks that Jews go to synagogue this coming weekend and that we take up the call, “Am Yisrael Chai.” Am Yisrael Chai. The people of Israel live. And we will.