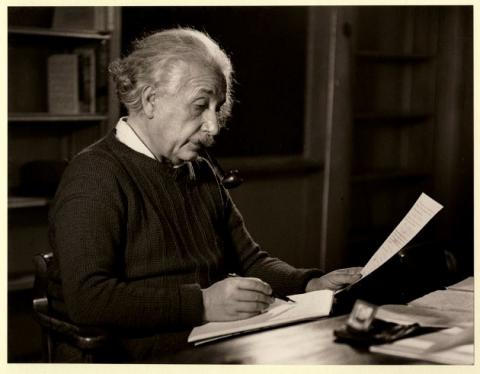 "You surely won't go to hell, even if you've been baptized," Albert Einstein assured his close friend Michele Besso, who had converted to Christianity. Writing to Besso in German, Einstein remarked that there were also advantages in leaving the Jewish religion. "As a goy, you're not obligated to study the language of our forefathers, while I, as a 'Jewish saint,' should be embarrassed at the fact that I know almost nothing. But I prefer to be embarrassed rather than learning it," Einstein wrote in reference to Hebrew.

The comments appear in a handwritten letter that is part of a collection of manuscripts from the legendary scientist, most of which were made public for the first time on Wednesday at Hebrew University of Jerusalem to mark this month's 140th anniversary of Einstein's birth.

At Besso's funeral in 1955, Einstein made astoundingly prescient remarks: "Now he has departed from this strange world a little ahead of me. That means nothing. People like us, who believe in physics, know that the distinction between past, present and future is only a stubbornly persistent illusion." Einstein died just over a month later, on April 18, 1955.

Einstein's letter to Besso is one of 110 manuscripts, written in German, that were recently acquired by Hebrew University from a private collector from North Carolina in the United States. They provide insight into Einstein's scientific work and personal life and now become part of the Albert Einstein Archives, which is maintained at Hebrew University's Givat Ram campus in Jerusalem.

It contains about 80,000 items that have already been made public. Einstein bequeathed his personal and scientific papers to the university and was one of its founders. Many of the documents in the newly acquired collection relate to mathematics and were written between 1944 and 1948. There is also one page with a concise explanation of the basic principle underlying the physics of the atom bomb and of nuclear reactors.

But the most fascinating document is scientific work by Einstein that has never been published or researched and was thought until recently to have been lost. It is an appendix to a scientific paper that he presented to the Royal Prussian Academy of Science in 1930. "The scientific connection of many of these calculations is still not clear," Hebrew University explained, but are part of his effort to integrate all of the forces of nature into a single theory.

The new collection also includes a letter that Einstein sent in 1935 to his son, Hans Albert, who was living at the time in Switzerland. In the letter, the elder Einstein wrote of his concern over the threat of war, but the correspondence also reflects his optimism, two years after the Nazis had taken power in Germany in 1933.

"I read with a bit of concern about a significant movement in Switzerland, incited by the German bandits. But I believe that even in Germany, things are slowly beginning to change. Let's just hope that there isn't a war in Europe before that. Germany's arming itself is certainly very dangerous, but the rest of Europe is finally beginning to take it seriously, particularly the British. It would have been better and easier if they had acted with a heavier hand a year and a half ago."

The new collection of the Einstein manuscripts was acquired by Hebrew University with a contribution from the Crown-Goodman Family Foundation of Chicago.

Prof. Hanoch Gutfreund, a former president of Hebrew University who is now an academic adviser to the university's Einstein Archives, called Wednesday's disclosure of the new collection an "important day." He also expressed pride at the opportunity that the archive has to preserve Einstein's legacy.

In three letters from 1916, Einstein writes about his work on the absorption and emission of light by atoms – a concept that later became the basis for laser technology. In a fourth letter, written decades later, on December 12, 1951, the scientist acknowledged that, after devoting 50 years of thought to the subject, he still hadn't managed to understand the quantum nature of light.

"Fifty years of thought have not brought me closer to the question of what light particles are. Today every simpleton thinks he knows the answer, but he is fooling himself," Einstein wrote.