The race of new nuclear weapons - a silly game without winners 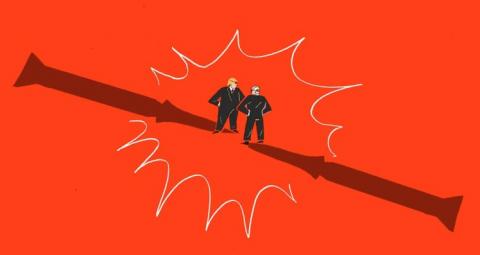 Before the fear of being blown up on a plane, or a train, or a sidewalk gave millions of people sleepless nights, before the threat of global climate disaster stirred dread, nuclear annihilation was the stuff of nightmares. By the mid-1980s, the United States and the Soviet Union had amassed 63,000 nuclear weapons, with the promise of mutually assured destruction if even one were ever used, even accidentally.

Then, after years of global protests and skyrocketing budgets, American and Soviet leaders stepped back from the brink and began a process of arms control diplomacy, accelerated by the fall of the Soviet Union, that shrank those arsenals by nearly 90 percent. For decades, that process and that diplomacy continued … until now.

President Trump and his Russian counterpart, Vladimir Putin, who control 90 percent of the world’s nuclear weapons, are preparing to abandon the 1987 treaty that eliminated ground-launched ballistic and cruise missiles with ranges of 310 miles to 3,100 miles. They have yet to begin serious talks on extending a 2010 treaty that reduced the nuclear warheads deployed on intercontinental ballistic missiles and other strategic systems, and the Americans, in particular, don’t appear to have any interest in doing so. Washington and Moscow are also modernizing old weapons systems and building new ones, at a cost of$494 billion over the next decade in the United States alone.

At the same time, Pakistan, India and North Korea are expanding their arsenals as the international consensus for nonproliferation erodes. Experts with The Bulletin of Atomic Scientists, who evaluate the nuclear threat, last month judged the current state of affairs to be “as worrisome as the most dangerous times of the Cold War.”

The Intermediate-Range Nuclear Forces Treaty of 1987, which eliminated 2,692 ground-based missiles, is part of a web of arms control agreements that have managed the threat. Mr. Trump is right to blame the Russians for beginning to unravel the I.N.F. treaty during the Obama administration by testing and then deploying a cruise missile banned by the treaty.

But he was wrong to assert in his State of the Union address that he had “no choice” other than to withdraw from the treaty, a move that takes effect in August. His threat to “outspend and out-innovate all others by far” in the production of weapons of mass destruction was chilling, particularly given Mr. Putin’s vow of a “symmetrical” response. “If our American partners suspend their participation in the I.N.F. treaty, so will we,” he said on Feb. 2. “And if they start working on new weapons, so will we.”

It’s unlikely the treaty will be revived, given the deterioration of Russian-American relations, despite Mr. Trump’s promises of warmer ties and a coziness that has drawn the scrutiny of the special counsel Robert Mueller.

The pact’s imminent collapse has intensified concerns that the United States and Russia will let the 2010 New Start agreement, with its caps on deployed nuclear warheads, intercontinental ballistic missiles and heavy bombers, as well as requirements for verification and data exchanges, expire in 2021. (Start stands for Strategic Arms Reduction Treaty.) Absent an extension or a new treaty, the nuclear arsenals will become unregulated — meaning there will be no legally binding, verifiable limits on the American or Russian nuclear arsenals — for the first time since 1972.

Adding to the uncertainty, Mr. Putin has warned that Russia is developing new “invincible” hypersonic missiles that will travel at more than five times the speed of sound. The United States, meanwhile, is developing a new conventionally armed intermediate-range missile that could one day be deployed in Europe. By the end of the year, Washington may be ready to field a low-yield nuclear weapon that could make it easier to use nuclear weapons without courting Armageddon.

Mr. Reagan appreciated the dangers of nuclear war and the value of negotiated agreements that could reduce weapons. The New Start numbers can go even lower. It has been over seven years since the two powers held serious nuclear arms reductions talks. The United States, its allies, even the Russians will be less safe if that process atrophies.

With Democrats now in control of the House, the new chairman of its Armed Services Committee, Adam Smith of Washington, plans to hold what could be the most fundamental public examination of American nuclear doctrine in decades. If Mr. Trump continues to push for an expanded nuclear arsenal and abandons the strategic arms accord, Congress should freeze the nuclear modernization budget and block funding for new weapons.

The commitment to spend billions of dollars to upgrade the aging nuclear arsenal was part of the Faustian bargain President Barack Obama made with Senate Republicans to win support for the New Start pact. He did so with the hope that it would help lead, eventually, to a world with no nuclear weapons.

Outspending Russia on a nuclear arms race, as Mr. Trump has bragged he would do, or abandoning an arms control regime that has helped forestall nuclear war for decades, is a foolish game of chicken, with no possible winners.