Bernard-Henri Lévy: Antisemitism Is ‘Back 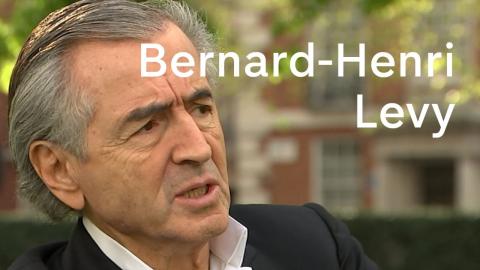 The steady rise of antisemitism around the world means that Jews in the US and Europe have little choice but to recognize that the need for “resistance and counteroffensive has returned,” the leading French-Jewish writer and public intellectual Bernard-Henri Lévy told The Algemeiner during an extensive interview this week.

Lévy’s core message — to be elaborated further when he appears in conversationwith the historian Simon Schama at New York City’s 92nd St Y on Feb. 13 —  is that antisemitism has reached a severity that the majority of Jews alive today have not so far encountered. “Antisemitism is back. Everywhere. Openly,” Lévy said,  as he reflected on a year that saw numerous instances of deadly antisemitic acts, among them the murder last March of Mireille Knoll, an 85-year-old Holocaust survivor living alone in Paris, and the slaughter by a neo-Nazi gunman of 11 Jewish worshipers at the Tree of Life synagogue in Pittsburgh at the end of October.

Hatred of Jews now carries “a strength and an absence of compunction that we had believed to be long gone,” Lévy argued. “Times are tough again for the Jews,” he continued. “The need for resistance and counteroffensive has returned for the Jews of Europe, the United States, and the world. It’s terrible. But that’s the way it is. And it is a fact that we’re going to have to start dealing with right now.”

Lévy said that at his forthcoming New York appearance, he would “tell the story of a Jewish child — me — born soon after the Second World War, whose parents said to him, ‘It is thanks to the Americans that you were born; it is thanks to them that Europe was saved from Nazism and, ultimately, from suicide; in the United States of America we have a special nation, an exceptional nation, that is, almost as much as Israel, a refuge for the world’s Jews.'”

He added: “Today, however, I wonder. I think of my parents — of my mother, who idolized the American soldiers; of my father, who fought at their side. And sometimes I wonder if they weren’t too confident. Pittsburgh tore a hole in the splendid pact between America and the Jews. Why? How? How far back does the rift go? That is what I will try to explain.”

What Lévy calls the “great American reversal,” is rooted, he said, in “the perverse effects of political correctness run amok and a communitarianism that is devouring good American patriotism from within. All against the background of the uniquely modern malady, the form of leprosy known as competitive victimhood, of which the United States of America is one of the epicenters.”

This was not always the case, Lévy argued, and it does not have to be. “I admire Martin Luther King Jr. precisely because he always resisted, to his last breath, the temptation of pitting memories against each other in rivalry,” he said. “I am leery of the Black Lives Matter movement because it has distorted King’s heritage in this regard.”

Asked for his views on civic education as a means of preparing future generations to counter racial hatred and antisemitism, particularly by teaching the history of the Holocaust in schools, Lévy asserted that such initiatives are premised on a misreading of antisemitism. “Antisemitism is not an opinion, it is a passion, even a religion,” he said. “And that religion is stronger than reason, education, and information campaigns. That was the dream of the Enlightenment: by opening a school you could silence an antisemite. But that’s not how it works.”

Lévy pointed out that the 18th-century French philosopher Voltaire, commonly regarded as “the incarnation of the Enlightenment, was also the incarnation of antisemitism.” A more contemporary example would be the American linguist and left-wing activist Noam Chomsky, described by Lévy as “a very great thinker (and a Jew, by the way)” who was “also one of the leaders of contemporary antisemitism.”

Remarked Lévy: “There is no correlation between education and wisdom. You can teach remembrance of the Holocaust all you want — but that’s not going to protect us against the return of the Beast.”

A better strategy, Lévy asserted, lay in “an accurate analysis of antisemitism — its nature, its sources, and the way it operates. There are so many clichés on that score, so much conventional thinking. These have to be deconstructed.” A dogged critic of President Donald Trump, Lévy acknowledged that the Israeli government’s positive view of the US leader was understandable at one level, if short-sighted.

“Trump has of, course, made gestures of friendship, and when one is a small nation subjected to immense hostility and every form of persecution, a basic rule applies: don’t be too difficult when friendship is offered; don’t play hard to get; don’t look a gift horse in the mouth,” he said. “That has always been Israel’s attitude.”

Lévy said that he could “understand that attitude, which is akin to an extension of our necessary and very healthy metaphysical pessimism.” However, citing a famous passage from the biblical Book of Exodus about the new pharaoh who “did not know” Joseph — the respected Israelite leader who had lived in Egypt — and who subsequently enslaved the Jews, Lévy argued that “Israel’s alliance with a mercurial, inconsistent American administration” was fraught with risks.

That Biblical passage,”coupled with the wisdom of our ancestors and sages,” Lévy said, “offers us useful lessons of caution in the face of the temptation to throw ourselves heedlessly into the arms of Donald Trump.” Quoting the French writer Jean Cocteau’s maxim, “I don’t believe in love; I believe only in evidence of love,” Lévy noted, “In this case, the opposite applies.” “Gestures of friendship are fine, but what are they worth if they are not grounded in a deep, basic friendship that comes from the heart?” he asked. “Defending Israel at the United Nations is obviously important. But what if that defense is not based on a true Ahavat Israel (love of Israel)? That is the question.”

Much of Lévy’s activity in the last decade has been devoted to advocacy on behalf of the Kurds — a nation of more than 30 million people split between Turkey, Syria, Iraq and Iran. Asked about the prospects for a change of regime in the Islamic Republic — whose own Kurdish population is almost 12 million — Lévy called for policymakers to “to be consistent and think things through.”

Said Lévy: “You can’t say ‘Iran is our enemy,’ and then authorize specific countries and companies to purchase its oil. Nor can you pretend that you want to overturn the Iranian regime while simultaneously abandoning the Kurds, who are our true allies in that battle, our real boots on the ground against renascent Persian imperialism.” Alas, he continued, “that is precisely what the West is doing.”

On the viability of regime change in Iran, Lévy said that “at the risk of disappointing my compatriots, I continue to believe it’s possible.” “I am a man of the left, a liberal,” he said. “But on this point — on the possibility and the necessity of provoking changes of regime — the American neoconservatives are right. We have to have the courage to acknowledge this.”