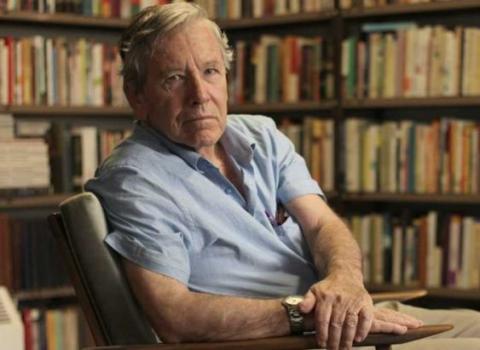 Amos Oz, a giant of Israeli letters for his works that explore human nature and the Israeli experience, died Friday at 79 from cancer, his daughter wrote on Twitter. Oz, an Israel Prize laureate, was the author of dozens of Hebrew-language books including novels, novellas, short-story collections and essays, as well as around 500 pieces for Israeli and foreign periodicals. His most famous works include the novels "Black Box" and "My Michael," as well as the nonfiction works "A Tale of Love and Darkness" and "In the Land of Israel."

Oz, born Amos Klausner, received a raft of awards in Israel and abroad such as the Prix Femina and Officier des Arts et Lettres in France, the Frankfurt Peace Prize and the Primo Levi Prize in Italy. He was also regularly touted as a favorite for the Nobel Prize for Literature.

Oz, a proponent of the two-state solution to the Israeli-Palestinian conflict, spoke out countless times during Israeli military operations in Lebanon and Gaza, urging dialogue and restraint. "A Tale of Love and Darkness," which was published in Hebrew in 2002, won the Goethe Prize. It is one of Israel’s best-selling prose books ever.

Among the figures appearing in the work is Israeli poet Zelda, who was a neighbor of the Klausner family in Jerusalem and who tutored the young Amos. Israeli-American actress Natalie Portman directed and starred in a film adaption of the book, released in 2015.

President Reuven Rivlin said the news of Oz’s death “bring us sadness” and called him “a literary giant.” Culture Minster Miri Regev added that “your works, which you’ve left in our hearts, will resonate all over the world.” The 2016 English translation of “Judas” was shortlisted for the International Man Booker Prize.

Oz was born in Jerusalem in 1939 and raised on Kibbutz Hulda in the center of the country. As a young man he studied philosophy and literature at the Hebrew University of Jerusalem. He began publishing his writings in 1961, at the age of 22; a year earlier he had married Nili Zuckerman, with whom he had three children.

One of his daughters, historian Fania Oz-Salzberger, announced her father's death on Twitter, saying in Hebrew that he "has passed away ... just now, after a rapid deterioration, in his sleep and at peace, surrounded by his loved ones." She thanked "all those who loved him."

Oz was also a visiting fellow at Oxford University, an author in residence at the Hebrew University and a writer in residence at Colorado College. Before beginning his university studies, he spent three years in the army's Nahal Brigade, and returned to duty during the 1967 Six-Day War and the 1973 Yom Kippur War. It was after his army experiences that Oz embraced a dovish outlook, promoting dialogue and peace between Israel and the Arab states. He wrote extensively about Israel’s conflict with its Arab neighbors.

Many of Oz’s stories are centered around kibbutz life and explore his characters' relationships with the modern State of Israel. Both his fiction and nonfiction works examine human nature and present the land and people of Israel and its myriad political subtlties.

In an interview in April this year, ahead of the publication of a German translation, Oz told German television: “I don’t know what the future holds for Jerusalem but I know what should happen. Every country in the world should follow President Trump and move its embassy in Israel to Jerusalem. At the same time, each one of those countries ought to open its own embassy in East Jerusalem as the capital of the Palestinian people.”