The controversial concept of the Warsaw Ghetto Museum 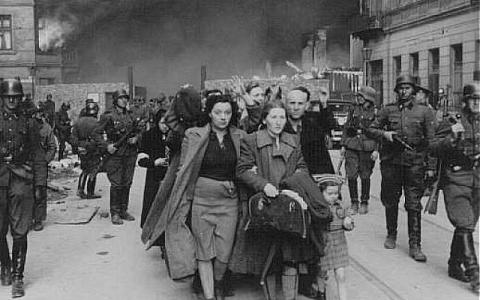 In ordinary times, the appointment of an Israeli historian to a top position abroad would be a source of pride in Israeli academia. But in recent weeks, Prof. Daniel Blatman of Hebrew University has had to deflect criticism for becoming the chief historian at the Warsaw Ghetto Museum, which is being built in the Polish capital.

“Some of the critics are my colleagues who once were my friends and maybe no longer are,” Blatman, a member of Hebrew University’s Jewish History and Contemporary Jewry Department, said this week. The Warsaw Ghetto Museum is due to open in 2023, 80 years after the Warsaw Ghetto Uprising. It will be housed in a building that served as a Jewish children’s hospital and operated inside the ghetto.

“It sounds very strange, but it will be the first Polish museum dealing with the Holocaust, even though Poland has an endless number of Polish commemoration sites,” Blatman notes.

Privately, Blatman’s critics are hurling accusations at him. In Polish, English and Hebrew they talk about his appointment as serving as a fig leaf, or, using another metaphor, they say he has sold his soul. The more moderate critics suffice with the view that he’s simply naive and being used by the Polish government.

In recent years, critics have viewed with concern the right-wing government’s efforts to shape Poland’s national memory, an effort centered around a new narrative that draws parallels between Polish and Jewish suffering in World War II. It also exalts the role of Poles in saving Jews and minimizes their responsibility in the persecution of Jews.

Those critics, who were shocked this year by Poland’s new “Holocaust law” – which condemns the claim that the Polish nation was involved in the Nazis’ crimes – are now worried that this government line will also be reflected in Poland’s first Holocaust museum.

Tel Aviv University’s Hava Dreifuss, the history professor who heads Yad Vashem’s Center for Research on the Holocaust in Poland, rebuffed the Polish museum’s efforts to court her last summer. “They requested my help as an expert on the history of the Warsaw Ghetto,” she says. “I didn’t want my name to serve an enterprise led by officials distorting the Holocaust and attacking historians, and I didn’t want to help a museum being established to further goals that aren’t necessarily related to history.”

Dreifuss, whose Hebrew-language book on life in the ghetto, “Warsaw Ghetto – the End,” was published this year, fears that the new museum will obscure events from the past that the Poles would prefer to forget.

“The Polish government is trying to advance research and commemoration of the Holocaust as long as it involves Jews who were killed by the Germans,” she says. “But during the period of the Holocaust there were also many Jews who were lost as a result of direct or indirect Polish involvement. And an exploration of these matters is something the regime is trying to limit, despite the existence of a great deal of documentation and research.”

Blatman says he has been granted full academic freedom in his new post. “I haven’t encountered the slightest hint of political involvement,” he says. “I wouldn’t have agreed to work as a historian in a place where I’d be required to bend my professional approach to political considerations.”

Polish Culture Minister Piotr Glinski articulated the “spirit of the museum” at the beginning of this year. “I would like this institution to speak of the mutual love between the two nations that spent 800 years here, on Polish land. Of the solidarity, fraternity, historical truth too, in all its aspects,” he told reporters.

Dreifuss doesn’t like this. “From statements by the current Polish government, one can infer that the new museum has aims beyond the presentation of life in the ghetto and the treatment of the Holocaust of Polish Jewry,” she says. “The statement about strengthening 800 years of Jewish-Polish fraternity and closeness is fundamentally ahistorical. The ghetto wasn’t in existence for 800 years, there wasn’t any Jewish-Polish fraternity there, and there's a suspicion that the new museum will be subordinated to just such a narrative.”

As she puts it, “It must be remembered that the current administration in Poland is promoting what is called a ‘historical policy,’ and in that context it’s trying to shape a narrative different from what’s emerging in the current research.”

Her qualms join those of other historians, who note, for example, commemorations of Poles who saved Jews while endangering or sacrificing their own lives. The most important of these is a museum established in 2016 in the southeastern town of Markowa dedicated to the Ulma family – Polish farmers who were killed by the Germans after they hid Jews.

“The museum at Markowa is devoted to an important topic, Righteous Gentiles,” Dreifuss says. “But actually it blurs the issue because it attributes to Polish society as a whole the help that was given by these noble Poles, who acted in a way that was counter to the social norms.”

The establishment of the World War II Museum in Gdansk, which opened in 2017, also stirred controversy. At its height, the director was fired and a new one was appointed “to give greater emphasis to the Polish narrative.”

Blatman isn’t the first Israeli to take part in a Polish commemoration project in the heart of Warsaw. He was preceded by Israel Prize laureate Dani Karavan, who is currently at work on a monument honoring the Polish Righteous Gentiles being built next to the POLIN Museum of the History of Polish Jews. That museum was dedicated in 2013, marking the 70th anniversary of the Warsaw Ghetto Uprising.

There has been criticism of the site chosen for the monument – the neighborhood where the ghetto stood. Critics say the monument to Poles who rescued Jews shouldn’t be in a place where so many Jews were killed.

Warsaw under the Nazis

When asked about the vision for the new museum, Blatman presents a view that some historians find controversial. “The Holocaust of Polish Jewry should be located in the Polish historical space, not in an exclusively Jewish space,” he says. In other words, Blatman wants to tell the story of the Warsaw Ghetto in the local context, including “the city of Warsaw and the Polish population, which were under the same Nazi occupation and were also subjected to the terror.”

He’s aware of the inflammatory potential of the comparison between the sufferings of the two peoples during World War II. “I’m not saying that their fate was similar or identical, but they lived under the same occupation and not on some other planet,” Blatman says. “We tend to forget a bit that the Jews in the Warsaw Ghetto continued to see themselves as Polish citizens who belonged to the place where they lived. Very often they were disappointed with Poland or were hurt by the attitude of Polish society toward them, but they still were Polish. Only after the war did we turn them solely into Jews.”

Albert Stankowski, a Polish Jew who previously worked at the POLIN Museum in Warsaw, has been appointed director of the new museum. “As I took the position of the Warsaw Ghetto Museum director, I was granted complete autonomy in the recruitment of the museum team,” he says. “We are open to cooperation with everyone who can assist us in ensuring an objective presentation of the facts.”

When he began his new job, he tried to recruit Polish historians to work at the new museum, but they declined. As Dreifuss puts it, “Precisely in light of the Polish researchers’ refusal, it seems to me that the approach to foreign historians isn’t a technical matter. As I see it, this was a way of trying to acquire international approval, and perhaps even more importantly, Jewish and Israeli approval for the museum and its narrative, at the expense of the Polish researchers.”

Some of Blatman’s articles for Haaretz show that he presents a complex picture of the Polish government. He believes that in recent decades historical research has focused on Polish aggressiveness toward Jews while ignoring the suffering of the Poles.

“The historical picture is not complete if one tells about the killing of Jews by their Polish neighbors without also mentioning, for example, the labor camps that were in operation in those same areas, and in which many Poles found their deaths,” he wrote in 2016. “The new museum,” he says now, “will try to grapple with issues that have been neglected in various exhibitions, both at Yad Vashem and in other countries. We’re definitely thinking about incorporating a reminder about other victims of the Nazi genocide.”

As he wrote in April, what he calls National Zionism “is a branch of European neo-fascism, which contains elements of xenophobia and ultranationalism, subordinating democracy to other values and restricting individual rights and the freedom and independence of the law.”

This week, he disagreed that there was something improper about taking a top position at a museum being established by a Polish government that he has criticized so severely. “Following that line, I also mustn’t cooperate with Yad Vashem because it’s under the aegis of a minister whose policy I’m very critical of,” he said, referring to Education Minister Naftali Bennett.