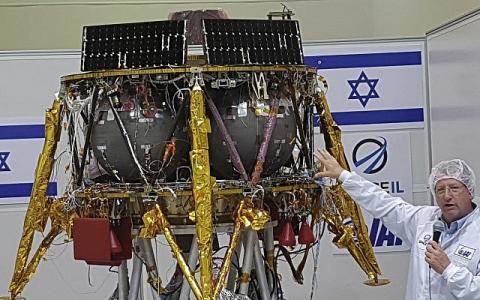 The United States space agency, NASA, signed an agreement on October 3 with the Israel Space Agency to cooperatively utilize the Israeli nonprofit SpaceIL’s commercial lunar mission, expected to land on the moon in 2019.

As a part of the agreement, a retro-reflector from NASA will be installed on SpaceIL’s unmanned spacecraft. This instrument reflects laser beams, which will enable NASA to locate the spacecraft precisely on the lunar surface after the landing.

NASA will grant SpaceIL access to its Deep Space Network communication services, and its Lunar Reconnaissance Orbiter — currently orbiting the Moon — will try to capture images of the Israeli spacecraft during its landing.

Also under the agreement, NASA will have access to data gathered by the magnetometer installed aboard the spacecraft. This instrument, developed in collaboration with the Weizmann Institute of Science in Rehovot, will measure the magnetic field on and above the landing site.

The agreement was signed by NASA Administrator Jim Bridenstine and Avi Blasberger, director of the Israel Space Agency, in the presence of SpaceIL CEO Ido Anteby.

“I’m thrilled to extend progress in commercial cooperation we’ve made in low-Earth orbit to the lunar environment with this new agreement with the Israel Space Agency and SpaceIL,” said Bridenstine. “Innovative partnerships like this are going to be essential as we go forward to the Moon and create new opportunities there.”

SpaceIL competed in the Google Lunar XPRIZE and continues to work toward landing the first Israeli spacecraft on the moon. Together, NASA and SpaceIL will collaborate on analyzing the scientific data returned from the mission.

The Israeli organization behind the country’s first mission to the moon on Wednesday announced a delay in the vessel’s launch from December to early 2019. SpaceIL said Elon Musk’s SpaceX firm, whose rockets are set to carry the unmanned probe into space, had informed it of “a delay of a number of weeks to the beginning of 2019.” SpaceIL stressed that the delay was SpaceX’s decision, noting in a statement that tests on their craft, shaped like a pod and weighing some 585 kilograms (1,300 pounds), were proceeding successfully.

The craft was originally set to reach the moon on February 13, 2019, where its mission would include research on the moon’s magnetic field and planting an Israeli flag. SpaceIL did not give precise dates for the postponed launch and landing.

The ambitious project began as part of the Google Lunar XPrize, which in 2010 offered $30 million (25 million euros) in awards to encourage scientists and entrepreneurs to come up with relatively low-cost moon missions. Although the Google prize expired in March without a winner having reached the moon, Israel’s team pledged to push forward.

The vessel will transmit data to the control center at the Israel Aerospace Industries for two days before its systems shut down.

THE TIMES OF ISRAEL