Efraim Zuroff: The serious scope of Holocaust distortion in the Baltics 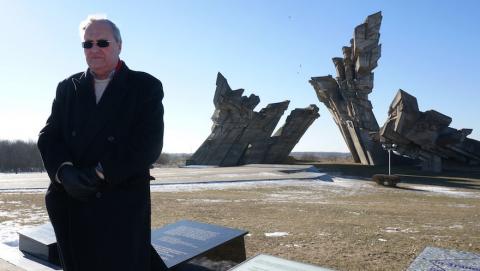 I think that it is a safe bet that Prime Minister Netanyahu has never heard of Lithuanian “freedom fighter” Adolfas Ramanauskas. In view, however, of his upcoming visit to Lithuania this week, and impending meetings with the leaders of Latvia and Estonia, he should make it his business to acquaint himself with the persona and the current narrative about his heroism, in order to understand the serious scope of Holocaust distortion in the Baltics and especially in Lithuania. And then, hopefully once and for all, he can express Israel’s unequivocal opposition to their ongoing efforts to rewrite the narrative of the Holocaust and promote the canard of equivalency between Nazi and Communist crimes.

Ramanauskas was one of the leaders of the so-called Lithuanian “partisans.” Not the ones among whom there were many Jews, who fought bravely against the Nazis during World War II, and constituted the only opposition in the Baltics to the Nazi occupation, but rather those who, following the Soviets’ re-occupation of Lithuania, retreated into the forests to fight against the Communist regime. Since Lithuania re-obtained independence in 1990, Ramanauskas and a few of his fellow “forest brothers” (another name given to these men) have been glorified for their struggle against the Soviets and been promoted as national heroes. Ostensibly, such a policy is only natural, but the problem is that quite a few of these anti-Communist fighters were actively involved in Holocaust crimes prior to their anti-Soviet exploits, a fact which, at least in theory, should have automatically disqualified them from glorification.

Ramanauskas, for example, wrote in his memoirs that during the initial weeks after the Nazi invasion, he headed a group of white-banders (Lithuanian vigilantes who were identified by the white armbands on their sleeve) who actively persecuted the Jews of the town of Druskininkiai in southeastern Lithuania. And while there is no direct evidence that he himself murdered anyone, the fact that he led this group of vigilantes who murdered and mistreated Jews is no badge of honor, and reason enough to deny him the status of a national hero.

In a meeting held last October with the Chairman of the Seimas (Lithuanian Parliament) committee, which suggested devoting the entire year of 2018 to honoring Ramanauskas, I presented these findings, but they were dismissed out of hand, without any due consideration, as if the mere suggestion that Ramanauskas’ past was tainted was the equivalent of grand treason. When Ruta Vanagaite, the co-author of my book on Lithuanian complicity in Holocaust crimes, also raised legitimate questions about Ramanauskas’ past, all the copies of her six books were removed from the bookstores, and her publisher threatened to pulp them. Protests from outside Lithuania saved the books from destruction, but could not protect Ruta’s livelihood, which was destroyed in one fell swoop.

Throughout this entire process, there was no response from Israel, nor have there been any efforts by the Israeli ambassador or Israeli officials to oppose any of the many honors granted to Lithuanian “heroes” who collaborated with the Nazis and actively participated in Holocaust crimes. On the contrary, the Israel ambassador in Vilna/Vilnius chose to respond to the Ramanauskas scandal by visiting the hero’s daughter, who is a former MP and icon of the ultra-nationalist right-wing, give her flowers for her birthday and inform her that the State of Israel did not agree with the criticism of her father, and honored his struggle and that of his comrades against Communism.

In fact, although the Lithuanian government has for years openly engaged in rewriting the official narrative of World War II and the Holocaust, has actively promoted the “double genocide” theory (one by the Nazis and one by the Communists), and has tried to minimize or hide the highly-important role played by local Nazi collaborators in the annihilation of Lithuanian Jewry and additional Holocaust crimes, our government has never protested or sought to stop these dangerous phenomena.

It was only several months ago, Netanyahu related for the first time ever to these issues, declaring categorically that “Israel will not tolerate Holocaust distortion.” That remains to be seen, and if the agreement signed by the government with the Poles is any indication, the future does not appear to be too bright in this respect. But perhaps our prime minister will surprise us. His trip this week to Lithuania is a golden opportunity to open a new page on this subject and to openly oppose the lies about the Holocaust being propagated throughout Eastern Europe and the canard of equivalence between Nazi and Communist crimes, as well as the honors granted to those who actively participated in the persecution and murder of Jews.

The time has come for Israel’s leadership to fulfill its role as the guardian of Holocaust memory.