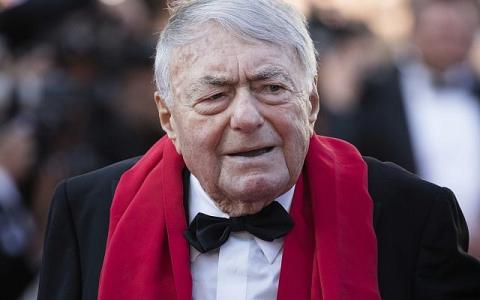 Claude Lanzmann, the Jewish-French director who made "Shoah," died on Thursday at age 92. "Shoah" is widely considered one of, if not the, most important documentaries ever made about the Holocaust. The film took Lanzmann some 11 years to make and it spans nine hours. Haaretz film critic Uri Klein wrote in 2015, on the film's 30th anniversary, that "Shoah" was one of the most important films ever made.

"'Shoah' changed the debate on the link between cinema and the memory of the Holocaust," Klein wrote. "This was the first film to show archival material from the concentration camps (which were contrasted by color shots of Auschwitz and Majdanek in the present). But this was also a problematic film: The word 'Jew' was never heard on the soundtrack."

"Lanzmann’s most radical step in 'Shoah,' a move unprecedented in a Holocaust documentary, was his forgoing of archival material," Klein continued. "'Shoah' documented the procedures of the killing industry; it was set in the present by filming the sites where the Holocaust took place, along with interviews of survivors."

Lanzmann himself did not see "Shoah" as a documentary. Conducting a masterclass at the Haifa International Film Festival in 2015, Judy Maltz reported that when an audience member referred to his best-known film as a documentary, Lanzmann responded: “I want to be nice to you, but if you use that word documentary once again to describe ‘Shoah,’ I will hit you.”

He then clarified why "Shoah" was not a documentary. “In a documentary, you recall something that preexisted,” he said. “But in ‘Shoah,’ nothing preexisted.”

His other films include "Israel, Why?" (1973) and "Tsahal" (1994), which attempt to understand Israel in the context of the Holocaust. He also published a memoir, "The Patagonian Hare," earlier this decade.

Speaking with Ari Shavit in Israeli in 2011, he was asked if Hitler was ultimately victorious over the Jews. "Yes. Hitler was victorious because the 6 million people who died will not return. They are dead forever," Lanzmann said.

"Hitler was victorious also in another way,' he added. "It would have been possible to assume that, after what happened, anti-Semitism would disappear. But that did not happen. Anti-Semitism is back. It is like a Hydra – when you chop off one of its heads, other heads immediately appear.

"But in one sense, Hitler was not victorious – the State of Israel exists," he added. "People who did not live in the past, and in particular Israelis who did not live in the past, don't understand this amazing achievement. The existence of the State of Israel also changes the way in which the world views the Jews and the way in which the Jews view the world. And contrary to what many people think, this state is an exemplary state with an amazing army. Israel is a tremendous victory over Hitler."

Lanzman's final documentary, “Les Quatre Soeurs” ("The Four Sisters"), featuring the testimonies of four Holocaust survivors, had been released in France only a day before his death.

The director’s death was confirmed by his family to French newspaper Le Monde.