The Secret Deal to End the Holocaust 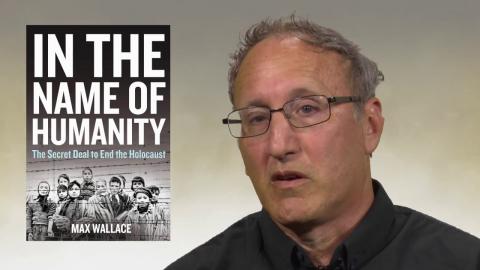 The Holocaust was “cut short” by a secret deal hatched between Nazi SS chief Heinrich Himmler and the former president of Switzerland, according to Canadian journalist Max Wallace’s new book, “In the Name of Humanity: The Secret Deal to End the Holocaust.”

Published by Skyhorse Publishing, the book revolves around Himmler, who, in the words of its publicity material, “was deceived into ending the Final Solution six months before the end of the war by demolishing the killing machines of Auschwitz, saving some 300,000 Jews, as part of a secret deal he believed would build a united Allied-German front against the Soviet Union.”

During more than two years of operation, the gas chamber-crematorium complexes at Auschwitz-Birkenau were the scene of the murder of a million Jews. Operations wound down by October of 1944, following a summer killing frenzy in which 400,000 Hungarian Jews were murdered. On November 25, the Nazis began dismantling the facilities, a process that did not end until January of 1945.

Wallace’s claim that Himmler cut a secret deal revolves around a well-known meeting between the SS head and former Swiss president Jean-Marie Musy. According to Wallace, that meeting — which was backed by Orthodox rabbis and Allied intelligence agencies — resulted in an agreement that Himmler would cease killings at Auschwitz, as a sign of his good will. In return, Himmler was given amorphous promises about a combined German-Allied front against Russia.

In the assessment of international Holocaust experts who spoke with The Times of Israel, however, there is nothing new about “secret negotiations” conducted with Himmler to end the Holocaust.

“Himmler made no deal that saved 300,000 Jews,” according to Holocaust historian Yehuda Bauer. “He tried to make deals with the West but apart from two transports, nothing came of it,” Bauer told The Times of Israel.

‘The motives of mad men’

According to Nazi hunter Efraim Zuroff, the theory posited by Wallace “is extremely difficult to prove,” he told The Times of Israel.

“There were several sets of negotiations between Jewish groups and Nazis — most linked to Himmler — all of which sought to save as many Jews as possible,” said Zuroff, director of the Simon Wiesenthal Center in Jerusalem. “The Orthodox rabbis who sent [former Swiss president] Musy to speak to [Himmler’s emissary] were one of these groups.”

Of all the negotiations Himmler was tied to during the fall of 1944, there is one “absolute provable achievement,” according to Zuroff. That “achievement” was Himmler’s release of a train with 1,210 Jews from the concentration camp Theresienstadt, a transport that was sent to Switzerland — and freedom — on the night of February 6, 1945.

According to Wallace, however, the claims made in his new book “are far more nuanced” than those presented in the press release. In particular, he told The Times of Israel, “a diverse range of negotiators and rescuers” led to the Nazis choosing not to murder 300,000 Jews within their reach, as opposed to any single encounter with Himmler.

“The book links the negotiations that began after the Germans invaded Hungary to the rescue of as many as 300,000 Jews,” said Wallace, noting that multiple parties were conducting simultaneous talks with Himmler. His book, in part, sheds light on ways in which these groups acted collaboratively.

Among his findings during 17 years of research, Wallace located documents at Yeshiva University about the “successful” negotiations with Himmler, including the Vatican’s behind-the-scenes involvement. Later this year, when parts of the Vatican’s secret archive are made public, Wallace believes evidence could surface related to the Church’s role in these negotiations.

“In the book, I call [documents about the negotiations] ‘very compelling evidence,’ but state that ‘one can never be certain of the motives of madmen.’ I do not make any smoking gun claims,” said Wallace.

The final gassing of Jews at Auschwitz took place in early November of 1944, when 481 Slovakian Jews were murdered upon arrival. By that time, most of the Nazis’ six purpose-built death camps in occupied Poland had been shuttered, some of them since 1943.

“Largely because of the chaos that prevailed during the last days of the Reich, along with the last-minute destruction of the Nazis’ once meticulous records, there are no accurate figures for how many Jews survived the Holocaust or the camps,” wrote Wallace in his epilogue. “It is also difficult to estimate how many survived directly or indirectly as the result of the negotiations with Nazis during the final stages of the war,” wrote Wallace, who believes Musy and the so-called Sternbuch Rescue Committee played a largely unheralded role during those months.

According to Wallace, Musy helped convince Himmler to allow the Red Cross into concentration camps during the final weeks of the war, effectively ending a plan to murder prisoners with poison and dynamite. Additionally, Musy’s son — Benoit Musy — helped negotiate the release of “thousands of Jews from [the camp] Ravensbruck,” according to Wallace, and he also prevented a death march from the camp Buchenwald.

Apart from the various negotiations with Himmler, other factors might explain his orders to dismantle the gas chambers in November of 1944.

For example, there was no longer a large Jewish community to deport to Auschwitz by that time. In Budapest, where there were still some thousands of Jews, the Arrow Cross regime was seeing to their slow demise. There had also been a “Sonderkommando” revolt at Auschwitz in October, during which Jewish prisoners blew up Crematorium IV and attempted to escape.

To buttress his case about a combination of “secret deals” shutting down the gas chambers, Wallace pointed to Holocaust historian Bauer’s 1994 book, “Jews for Sale,” in which Bauer implied that Himmler’s decision to halt forced marches in Hungary was connected to the negotiations.

“It was also Yehuda Bauer at the Yad Vashem Symposium on Rescue in 1974 who first questioned the official narrative that the Nazis destroyed the Auschwitz killing apparatus because the Russians or Americans were closing in,” Wallace told The Times of Israel.

In that narrative, Nazis on the run placed explosives in the gas chambers at the last minute, as Red Army units were about to liberate the camp in January of 1945.

“[Bauer] claimed that this explanation never made sense because by that logic [the Nazis] could have ‘hastened’ the extermination to hide the evidence of their crime. The Russians, after all, were still two months away,” said Wallace, implying the Nazis would have murdered the camp’s remaining Jewish prisoners by the end of 1944, if covering up evidence had been a priority.